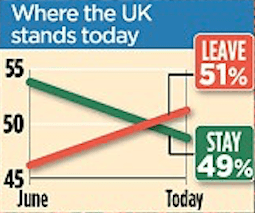 Some interesting polls hit the news in the last few weeks but the EU referendum poll looks the most interesting for Scotland and indeed the future of the UK. The Mail on Sunday poll by Survation found 51% support for quitting the EU with only 49% wanting to stay.  This is a surprise, given Survation found 54% pro and 46% anti EU just two months ago.  The survey suggests that the refugee crises has damaged EU support as 44% felt the UK should either take zero refugees from Syria or a number capped at 10,000 and 22% would be more likely to vote to leave if the refugee crises worsened.

This is just one poll and so doesn’t demonstrate a trend but its the constitutional impact that makes this poll stand out. It is now widely understood that the SNP manifesto commitment for next year’s Scottish election is will confirm no immediate plan to hold a referendum but to maintain the right to hold one if there is a material change in circumstances.  An EU exit when Scotland voted to stay would be such a justification, but I don’t believe that a result from the EU referendum alone would guarantee a Yes vote for independence in a 2020 plebiscite.  It would have to be complemented by a growing and widespread disillusionment in Westminster broken promises on powers, cuts to Scotland’s budget, a demonstrable disadvantage to Scotland over English Votes on English Laws and possibly Labour civil war following the election of its new leader.  You could, therefore, argue that a perfect storm is brewing for a second independence poll within five years.

However, there are some spanners in the works; next year’s GERS figures will show a significant drop off in oil revenues, what that will demonstrate is that Westminster badly let Scotland down by not investing in an Scottish sovereign oil fund. However  ‘too small and too poor to be independent’ mob will be whooping and hollering at the size of the deficit that Westminster mismanagement has caused.  Another small spanner is that the Survation EU poll shows only a 51 /49 per cent vote from Scottish respondents for maintaining EU membership; a surprising slip for the yes side in Scotland and the flip of the result in the rest of the UK. Having examined the data, the Scottish sample size was only 76 and you can’t accurately extrapolate such a small sample to the whole of Scotland. That said, it is an interesting finding and if the refugee crises gets worse, the survey indicates that a vote for leaving the EU would be more likely in the Scottish sample.  Survation didn’t survey 60% pro EU Northern Ireland (3% of votes) – all of this points to the 2017 EU referendum being too close to call.

I suspect that the EU’s failure to act with unity, give a clear message and show that it is capable of coordinating a humanitarian response has damaged its reputation with pro and anti-immigration voters alike. Leaving struggling countries such as Greece to deal with the problem largely on their own makes the EU look like a club whose membership benefits disappear in a crisis.

Watching Germany and Sweden respond in a heartening and enlightened (some might say sightly naive) way is a direct contrast to Hungary and Slovakia whose racist, outdated and inhumane approach threatens European unity. Here David Cameron back-pedalling on his anti-immigration rhetoric is the de facto leader of the pro-EU camp (yes really) and his own incompetent stance will have damaged EU support. Many UK voters admire Australia’s points system, based on the idea that there is good immigration and bad immigration.  They see skilled workers who add to the economy as good immigration and those that need support in the form of a roof over their heads, food and some form of benefits as bad, so millions of refugees arriving in the EU that they can’t easily categorise in their positive bracket is unsettling for them, regardless of the fact that almost all of us would be walking to Europe to save our families if we were in the same position.

Frankly that means that the politically correct belief that you can argue “all immigration is good immigration” is politically naive.  That said, the problems of EU migration at the core of the EU referendum are massively exaggerated by the eurosceptic press.

Ironically, the EU was created by the need to foster greater economic and political cooperation in a Europe that had been devastated by two world wars that created refugee crises of their own.  It worked and Europe has never before enjoyed such a long period of harmony and relative prosperity. We should never forget that the EU has been a great success in its core aims. We should also remember that the vast majority of EU migration has been hugely good for Scotland and indeed the UK.

Of the EU migrants in the UK, only 1.2% are economically inactive and, according to a report by University College London, between 2001 and 2011 EU migrants generated positive net contribution of £20 billion to the UK economy through paying more in taxes and receiving less in benefits than UK citizens. Flipping the argument 2.2 million UK citizens are living and working in the rest of the EU, almost 1 million in Spain.

Of the 329,000 UK citizens living in Ireland, five times more claim unemployment than Irish citizens do in the UK; Ironic, given the reception Irish migrants received in the past. In Germany four times more benefits recipients are UK citizens than the number of Germans receiving benefits in the UK.

EU students in particular benefit Scotland. There are currently 19,200 EU students attending Scottish universities; they’re young, talented and likely to get good jobs, pay taxes and have families, so we should want them to stay and work here.

Despite the fact that immigration and refugees seem to be damaging support for the EU, there is as strong an economic case for EU immigration as there is a moral case for helping refugees. Those of us who support the general principles of the EU need to raise our game and start making the economic, social and political case to ensure a Yes vote, at least in Scotland.