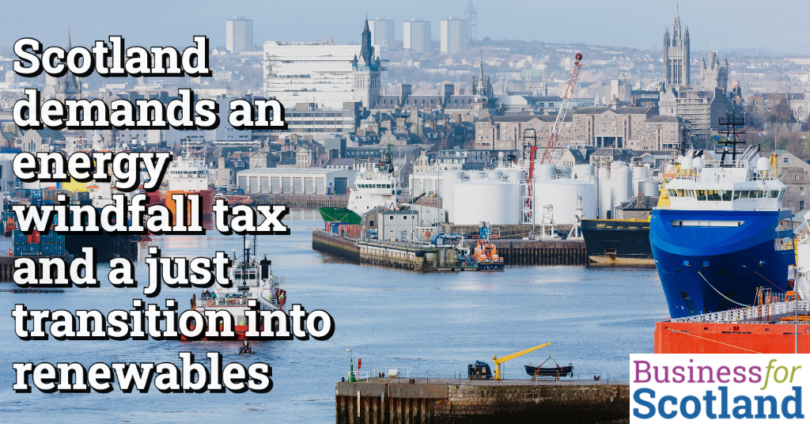 This week, energy industry leaders asked the UK Government to step in and do something about an energy crisis that is spinning out of control. They pointed out that power supply companies cannot deal with this. It is not the job of business leaders to mitigate the catastrophic effects of the huge and rapid increases in energy costs on society. That is the role of Government.

The political parties for whom the overwhelming majority of Scots vote are in agreement for once. They all demand immediate action on energy bills. They want:

But on energy policy, Scotland is ruled from Westminster by a Conservative Government, which the people did not elect. They have said No to all three measures.

The case for a windfall tax

Economist John Brown, Chief Exec of BP from 1995 to 2007, said recently when the oil and gas price becomes

“outrageous and stays there, I think it’s not unreasonable to expect the nation to take a bigger portion of the rent for the Treasury.”

“Windfall taxes can be justified when it is reasonable that those drawing up tax legislation did not foresee extreme circumstances that subsequently make them necessary. The UK’s North Sea oil tax regime, set in 2016 for a world of persistently low energy prices, taxes profits at a rate of 40 per cent. In 2011, the last time oil prices were high, then chancellor George Osborne imposed a rate of 62 per cent on profits from the North Sea.”

Why is the UK Government so reluctant to impose a windfall tax?

Any increase in taxation revenues from the North Sea will appear in GERS  and reduce the apparent deficit. (It would also help to redress the battering the Scottish economy is taking from Brexit.)

The Unionist side claims an independent Scotland is not economically viable and as a new referendum looms, the Conservative Government may be reluctant to damage their strongest argument.

The previous windfall tax of 2011 did have a hugely positive impact on GERS. But since the 2014 referendum, the Westminster Government has reduced all taxes on oil and gas and even made tax rebates in order to create a false deficit in GERS. Increased profits on oil and gas extraction from the North Sea make no difference to Scotland’s financial position, regardless of the price of oil, because it is not taxed. According to those totally engineered figures, Scotland looks as if it would be better off without an oil industry and that is a completely false narrative.

Most UK oil and gas companies have barely paid any tax over the last five years — 19 North Sea oil and gas companies, including BP and Shell, have actually been net recipients of taxpayers’ money. These rebates have made the UK tax regime one of the most generous in the world.

The energy crisis is a huge earner for Norway

In contrast, Norway is making a great deal of money from the oil and gas crisis.  All profits made from oil and gas extraction in Norway are subject to a 78 percent windfall tax. The money raised then goes directly to the Norwegian sovereign wealth fund, which now holds $1.3trn in assets, equivalent to $240,000 for each of Norway’s 5.4m citizens, with a stake in 1.3 percent of all of the world’s listed companies. The record profits reported by Equinor also largely end up going back to the Norwegian people since the state has a 67 percent stake in the company.

According to research from Juan Carlos Boué at the Oxford Institute for Energy Studies, the effective tax rate has averaged

From 1990 to 2017, the UK government collected £181bn in revenues. If the tax rate on extraction had been the same as Norway’s, Boué estimates, the UK would have made about £437bn.

Where is the extra money Scottish energy consumers have to pay going?

Oil and gas companies’ costs have not gone up in line with the bills – so rising prices simply mean more profit is being extracted from consumers’ pockets. The Government argues that the money energy companies make will be invested in the transition to net zero. But that needs Government regulation – it can’t simply be left to the market.

Since 2010, Royal Dutch Shell and BP have together spent £147.2bn on stock buybacks and dividends — compared to a FTSE 100 average of £10.8bn over the same period. This amount is seven times more than the £20bn required to keep households’ energy bills to their current level during this period of elevated wholesale energy prices, according to the think tank Common Wealth.

Lots of other energy businesses are making more money – even the privatised National Grid announced a few days ago that earnings will be higher than expected as profits rise in its UK transmission business. In a brief stock exchange statement before posting full-year results in May, the FTSE 100 power group says it is benefiting from “higher inflation” and that profits will be “above guidance”. It will pay most of this out in dividends.

The UK Government is also taking cash from billpayers. If regulated energy producers like Scottish Power make extra money, they have to pay that over to the UK Government. The government is also clawing back the cost of the dozens of energy companies that collapsed (due to poor regulation) through the standing charge. Scots are being made to shoulder more than their fair share of this debt as the charge was put up unevenly across the UK. The nuclear finance bill also adds a nuclear levy to what every household has to pay. And bill payers are also being made to pay tens of millions in admin costs for Chancellor Rishi Sunak’s £200 loan scheme.

A crisis situation demands an immediate response – to reduce demand and the high cost of energy.

Michael Lewis, Chief Executive Officer, of E.ON told the committee: “Our concern with the energy security strategy is that it was actually an energy supply strategy, and we also need an energy demand strategy—in other words, energy efficiency. For us, that was the big gap. These are things that we can do quickly. These are things that we can ramp up for vulnerable customers very quickly.

“We were very disappointed that the Government did not address that directly, because that is the silver bullet for solving some of our short-term energy problems—a massive investment in energy efficiency. We have far too many poorly insulated homes in the UK—the worst in Europe—and we do not have a coherent approach to upgrading them. The ECO system—the energy company obligation—is a tried and tested method. We would like to see that doubled, but funded through taxpayer funds, not through bills, because that would add more to energy bills.”

Keith Anderson, Chief Executive Officer of ScottishPower,  told the committee that he supported the long-term direction of travel but was deeply concerned about the lack of short-term action.

He said: “if you convert to electricity and renewables, it drives the price down. What the document does not tackle is the short-term issue and the short-term need. My urge and push for the Chancellor is to bring in something much more radical and fundamental. That is why I think the deficit fund should come in and why we should then move to a social tariff.

“I am hugely—massively—concerned for people, for anyone out there. There are so many people who are really going to struggle with this issue. We are seeing the start of that with our customers. My biggest concern is for when we get to October, particularly around the most vulnerable and poorest. It has got to a stage now where I honestly believe that the size and scale of this is beyond what I can deal with. It is beyond what I think this industry can deal with. It needs a massive, significant shift in Government policy and approach towards this.”

Scotland’s elected representatives overwhelmingly support immediate action to help consumers struggling with huge bill increases. An energy crisis like the one we are currently experiencing demands a radical response. The UK Government has done little or nothing to help.

A windfall tax whilst prices remain high would be an effective way to fund help for consumers in the short term. That could be used to reduce bills but we also need a massive drive for energy efficiency. These should be funded by general taxation and not through energy bills. That is a regressive way to fund investment – already the poorest who are on pre-payment meters have to pay more, and standing charges are a bigger proportion of their costs.

This situation is likely to fuel demands for independence – the levers of power to address the energy crisis are not in Scotland’s hands..