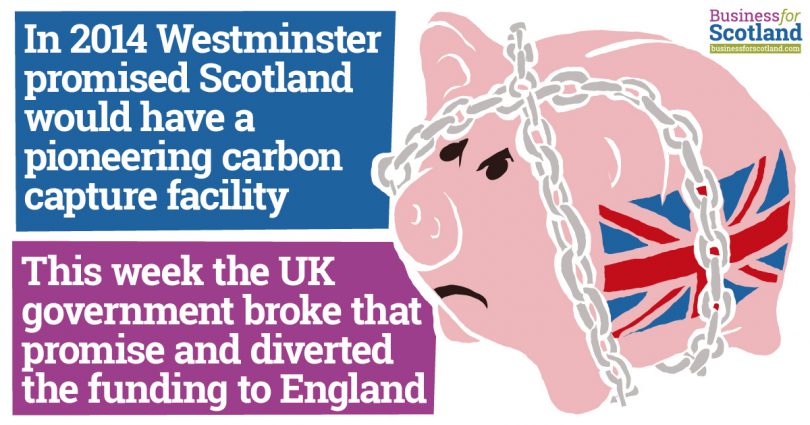 Promises to make Scotland a world leader in carbon capture technology made by the UK government in its bid to woo voters in the 2014 independence referendum were yesterday revealed as a dirty trick.

Westminster has now told Scotland that far from leading the world in this green initiative it will not now receive UK government finance for its first carbon capture and storage facility.

The Acorn Project at St Fergus in Aberdeenshire had been widely expected to receive UK government backing but the first developments will now be built on the Humber near Hull and in Liverpool Bay instead.

The then UK energy secretary Ed Davey promised major investment in the world’s first gas-fired carbon capture and storage facility at Peterhead in February 2014 as campaigning around the first independence referendum was in full swing.

Although he denied that the cash – part of £100 million government investment in the new technology – was a bribe to persuade voters to reject independence, he was keen to stress that an independent Scotland would ‘’find it more difficult to proceed’’ with the project.

The reality behind his lies was starkly revealed yesterday when the dream of having the Acorn Project ready by the middle of this decade turned to dust.

The project has been designed to take and store carbon dioxide in the Goldeneye gas field in the North Sea. It  would have captured emissions from Grangemouth and St Fergus, plus a new power station at Peterhead.

It had many advantages over any competition. Experts said the depleted oil and gas reservoirs of the northern North Sea was a perfect home for our waste carbon dioxide.

The project was said to be “shovel ready”, using redundant pipelines once used to extract gas from the field. Infrastructure from extracting the gas is all still there and simply needs adapting for carbon capture.

Work on the project has been going on for years, even after an initial competition for carbon capture and storage by the UK government was cancelled in 2015, an ominous sign of the cruel blow to come.

The project was considered crucial to meet the 2045 target date set by the Climate Change Committee – which advises both the Scottish and UK governments – for Scotland to become net zero. And it offered workers in Aberdeen’s oil and gas sector a transition into an alternative greener industry.

None of these arguments persuaded the UK government to fulfil the promise made to Scotland in the days where it would say virtually anything to stop the rising support for independence. Boris Johnson obviously prioritised winning over voter support in north-west England.

When he made his announcement back in 2014 Mr Davey said the UK government’s support for Scottish energy projects would help realise a potential £200bn benefit identified by Scottish oil magnate Sir Ian Wood.

Mr Wood, chairman of the Energy Transition Group, said yesterday that the refusal to fund the north-east project was ‘’a real blow to Scotland’. He said it was ‘’hugely disappointing’’ and urged the UK government to think again.

He said: ‘’This makes little economic or environmental sense.’’

The Scottish government, which has invested £500 million in a just transition from fossil fuels said the UK decision showed a “clear lack of ambition and leadership” on climate change. 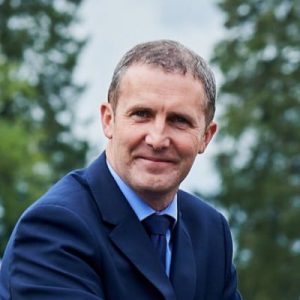 Scottish energy secretary Michael Matheson said: “This is a terrible decision by the UK Government.  All credible evidence and analysis have demonstrated that CCUS is critical for meeting Scotland’s statutory emissions reduction targets.”

He added: “It will also significantly compromise our ability to take crucial action to reduce emissions in Scotland and will have serious implications for delivering a just transition for those in our oil and gas sector.”

Banffshire and Buchan Coast MSP Karen Adam said she was “utterly appalled” at the decision. She added: ”The downturn in oil and gas, Covid and Brexit have devastated our north -east communities.

“This would have been an incredible step forward for our work force, our environment and local economy. Make no mistake this is a political choice. Once again we have been overlooked and I’d go as far to say snubbed.”

The UK government’s decision is particularly ironic as Scotland prepares to host the historic climate change conference COP26 in Glasgow.

It sends a clear message as voters considering the second independence referendum which the Scottish government plans to hold before the end of 2023. That message is: ”Don’t believe a word we say or any promises we make about any benefits Scotland would receive by staying in the Union.”

The north-east carbon capture project is now unlikely to receive UK government funding until the 2030s.