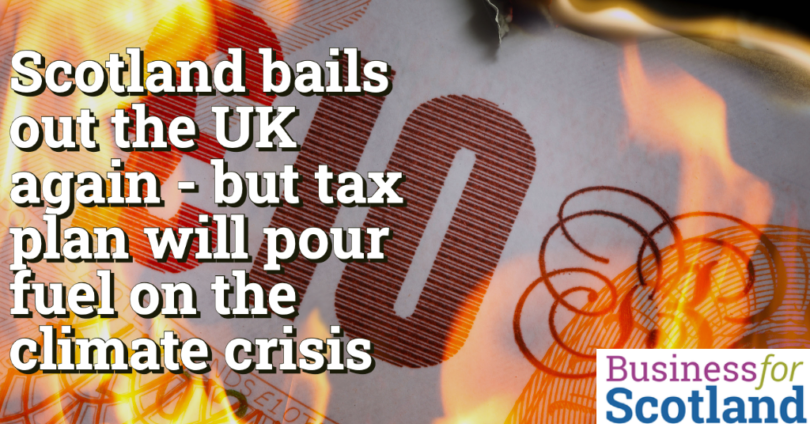 The UK Government’s U-turn on a windfall tax expected to raise £5 billion from the oil and gas industry is the latest example of Scotland’s assets being used to bail out the UK. But the new scheme is also geared up to push investment towards extracting more oil and gas from the North Sea.

The package includes a tax “super-deduction” which means money will be channeled into extracting hard-to-reach oil and gas reserves.  Ami McCarthy, political campaigner for Greenpeace UK said the move would “pour fuel all over the climate crisis.”

The way the tax is constructed is also bad news for Aberdeen, whose ambition to be the centre of a new renewables boom is threatened by lack of support from the UK Government and massive underinvestment – in contrast to EU countries’ huge investment in their renewable hubs.

The last time the UK Government levied a windfall tax in 2011, the following year Scotland’s notional bank book GERS recorded that Scotland was a significantly better off country than England, with a healthier fiscal balance.

After that, the UK Government changed the tax regime and most of the North Sea’s energy producers were barely taxed at all. This was ostensibly done to increase investment and protect jobs – but Aberdeen lost more jobs than Norway which continued to tax energy firms at its usual high rate.

The cost of providing tax benefits to oil and gas companies was all allocated to GERS – so by this measure the benefits of the windfall tax should be added to the revenue side when it comes in.

GERS will be likely to benefit from the Chancellor’s windfall tax, probably in the 2023 accounts – which could come out just before the next independence referendum. But the final total will depend on how much of the money is spent digging hydrocarbons out from the sea bed.

“A ‘super-deduction’ style investment allowance will be introduced within the levy to provide an immediate incentive for the oil and gas sector to invest in UK extraction…The new Investment Allowance will mean businesses will overall get a 91 pence tax saving for every 1 pound they invest,”

It did not list other types of energy investments such as offshore wind, tidal power, or investment in the much-needed grid upgrade that will be required if Scotland is to become a renewable electricity hub for the British Isles and Europe.  It did not even mention carbon capture.

This goes against what the UK Government said at COP 26 last year and its pledge to become carbon neural by 2050 – it also fails to direct investment towards the massive shortfall in what is required to turn Aberdeen into a renewables hub.

“Britain’s government hosted last year’s COP26 climate summit, which urged countries to phase out inefficient fossil fuel subsidies. At the same summit, it shunned invitations to join other oil and gas producing nations in their efforts to ban fresh extraction of hydrocarbons.”

Steve Trent, founder of the Environmental Justice Foundation, said the tax was a positive step to help households cope with rising energy costs.

“But there is a gaping loophole. Oil and gas corporations can largely avoid the levy by increasing investment in the extraction of yet more fossil fuels in the UK.”

Tax changes will have little effect on businesses

The FT reported that the change in the tax regime could mean an end to the practice that oil and gas operators can use losses racked up after the oil price crash of 2014 to offset their UK tax bills, while other reliefs are designed to help with the decommissioning costs of depleted oil and gas fields.

There was some pushback from the industry. Derek Leith, global oil and gas tax leader at EY told the Financial Times.

“People who thought that in the next year or so they would be using these historic losses before they had to pay any tax are suddenly going to be facing a tax bill of 25 percent on their profits. That will come as a real shock.”

But given that Shell, BP and Total all revealed historic first-quarter profits well into the billions and are spending more than this on share buybacks, and that most European countries have already introduced windfall taxes, the shock will probably be slight.

Shell, Europe’s biggest oil company, has not paid any tax on its oil and gas production in the UK North Sea for four years. Investment bank Jefferies estimated that BP’s tax bill would increase by $100mn in 2022 and $800mn in 2023. At TotalEnergies, the second-largest oil and gas producer in the North Sea, the incremental tax impact was expected to be $500mn in 2022 and $900mn the following year, while for Shell it said it expected the impact would be negligible.

Despite the UK Government’s attempts to convince otherwise, Scotland is a wealthy country, with huge natural assets. It owns 90% of the UK”s oil and gas – and so Scotland is producing £4.5 billion of the predicted windfall tax.

The need for a windfall tax is, at least in part, because the UK Government has presided over a decade of mismanagement of energy. There has been a chaotic approach to regulation – which ended up with the costly collapse of 29 providers. Public investment and market incentives could have built a renewables-based grid and a faster transition away from carbon. The  decision to leave oil and gas virtually untaxed proved a failure in its own terms. It enriched shareholders instead of protecting jobs, and the side effect of making Scotland’s accounts look worse may not have been accidental.

While the UK pushes cash into fossil fuels, last week Denmark, Germany, Belgium and the Netherlands stepped up their pledge to build up to four artificial islands in the North Sea where the energy created by wind turbines could be turned into hydrogen and electricity.

Help for energy bill payers facing huge and unaffordable price hikes is necessary and welcome, But the way it is designed –  to encourage more fossil fuel extraction – is a political choice made by a Government Scotland didn’t elect. Only with independence can Scotland grasp the opportunity to become a powerhouse of renewable energy.