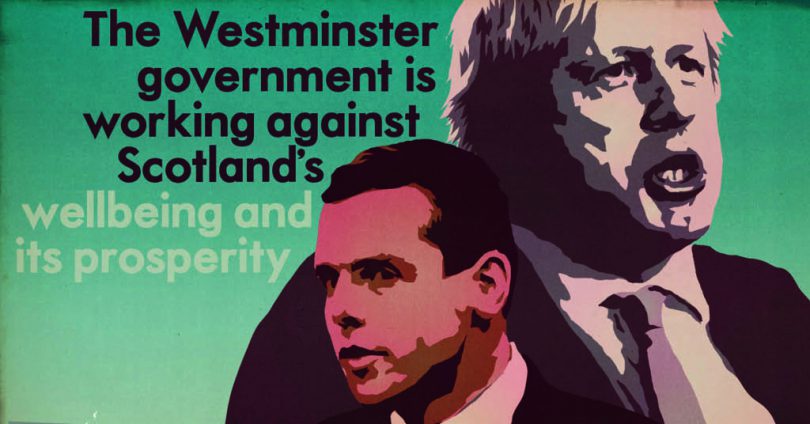 Boris Johnson arrived in Scotland yesterday for a two-day photo opportunity … and proceeded to alienate as many people as possible.

Ahead of the trip he refused an invitation from First Minister Nicola Sturgeon to discuss the pandemic recovery. Johnson went on to tell Scotland a second independence referendum was not in its interests … despite the fact that voters returned a majority of pro-independence MSPs at the last Scottish elections in May.

Social media was full of dismissive comments about the Prime Minister’s visit. Here’s just a selection.

⁠Nobody loves Boris Johnson in Scotland, unless you’re involved in one of his dodgy deals

Boris is the PM of the UK government, Nicola is Scotland’s First Minister and it’s totally unacceptable that Boris visits Scotland and that he and his minions do not have a meeting on their itinerary. It shows total disrespect

Boris Johnson’s global Britain can’t even extend beyond its own borders! The Americans eventually wised up to Trump, when are the English going to wise up to BoJo?

My mum’s thoughts on Boris Johnson not meeting with Nicola Sturgeon on his visit to Scotland: ‘he’s probably scared witless* of her. [*she didn’t say witless but it does rhyme!]

There is a huge backlash today in Scotland after this, massive support for Sturgeon. Boris has put his foot in his mouth again

Boris Johnson is visiting Scotland as First Minister of England. He must be as he’s only visiting things devolved to the Scottish Parliament, police energy etc. You have no authority there @BorisJohnson, read the Scotland Act, read it and understand it

It does all make you wonder who are the incompetents advising Boris Johnson on Scotland. This farce, & the time he ran away from the Scottish media… & remember that non-existent ‘camping-in-a-tent’ break in Scotland?

Really good you are doing a farewell tour of Scotland Boris Johnson, the last Prime Minister of the United Kingdom

Only a major league scaredy-cat would refuse an invitation to meet with Scotland’s First Minister while visiting Scotland. Choosing to hang out with Douglas Ross instead confirms Boris Johnson is not a serious person

Incompetent, inept and completely disingenuous is the only way to describe Boris trying vainly to answer why he inexcusably chose to snub The First Minister of Scotland on the Nine this evening

Isn’t it incredibly rude and disrespectful to go to Scotland and not to meet the Scottish First Minister? Or am I missing something?

Scotland is a country. It has a government and a parliament and a leader that is 10 times more proficient than Boris Johnson. It has a police force that reports to the Scottish parliament. Johnson should bear the reporting line in mind and have some sensitivity. That’s all

Boris Johnson didn’t send one of his lackies to insult the people of Scotland. He came up to Scotland for 2 days in order to insult them himself

Boris Johnson didn’t send one of his lackies to insult the people of Scotland. He came up to Scotland for 2 days in order to insult them himself

Parody Prime Minister & Mayor of Brexitland Boris Johnson has refused to meet with the First Minister of Scotland Nicola Sturgeon. He’s always been afraid of intelligent powerful women so no surprise there. He’s an embarrassment