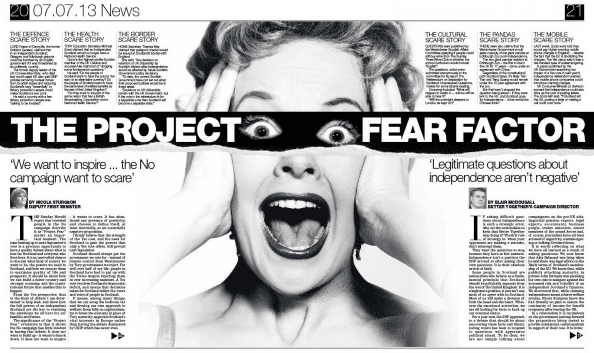 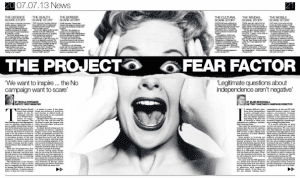 Westminster never wanted to give Scotland any more powers – they fought tooth and nail to keep devo max off the ballot paper because they knew it would either win or split the No vote, allowing Yes to win out right.  They only promised more powers when their own polling suggested they were in danger of losing, and they have been backtracking ever since.

They know that more powers, specifically the vow of substantial new devolution is very popular and they know they can’t attack it or be seen to obviously backtrack. So they have chosen the deceitful tactic of targeting one of the foundation stones of more powers full fiscal autonomy, because they see it as vulnerable to political spin, since people don’t really understand what it means. They are clearly about to throw the mother of all scaremongering campaigns against full fiscal autonomy, but we have been here before.

We will hear fears of a big deficit with full fiscal autonomy, that differing tax rates will mean confusion and a race to the bottom. We will hear from Westminster’s friends in big business who will talk about uncertainty affecting investment; they will claim it will cause a huge black-hole and threaten pensions, to place older people in fear of losing their paltry incomes. And why not? It worked during the Independence referendum and they calculate that it will work again. You might think its a suicidal tactic, after all, talking Scotland down and referendum scaremongering sunk them in the polls. But a Labour insider boasted to me that the more powers argument is keeping the SNP vote high, and if they destroy the case for more powers then they destroy the surge.

Project fear is alive and well, Westminster’s new ‘No to more powers’ campaign has Jim Murphy as its new cheerleader and will come in three stages.

Stage one was when the London media jumped on YouGov research, claiming the vow didn’t make a difference. This was the groundwork for a retreat from more powers. You can see their rationale – “we offered a vow but it didn’t make the difference therefore we don’t have to implement it.”

Stage two is to undermine the more powers rationale with scare stories and then, avoid the fury backing out of the promise would create, by scaring enough people into thinking it was actually a bad idea so they’d get away with it.

Stage three will be for Westminster to pass a massively watered down more powers offer so they can pretend the vow as delivered, despite the fact that nothing of any substance will have been devolved and certainly not the job creating, economy growing powers the people want and deserve.

Yes we couldn’t believe it either!

The obvious problem is the SNP would call this a material change to the constitutional promises and that would mean they would be duty bound to call for a new referendum in their 2016 Holyrood manifesto. They would likely be able to command a majority under such circumstances and so we would go again. Cameron has the solution, saying yesterday he “would not sanction a second referendum on Scottish independence, insisting that the issue had been ‘settled for a lifetime’.”

Unsurprisingly this has now been backed up by Milliband who today essentially said that he wouldn’t let Scotland down by giving us more powers. Clearly the unionist parties intend to still show a unified face to Scotland.

There are several problems with this approach. First of all, banning the right to call another referendum will backfire more severely than project fear on the votes for the unionist parties in Scotland, (David Cameron doesn’t care). A precedent has been set, we now know the process for achieving independence; if a party with a referendum in its Holyrood manifesto can command a majority they have the right to call one. If Westminster outlaws future referendums on independence having failed to deliver the promises that won the last one, then that amounts to nothing less than a full scale assault on democracy.

Secondly, the whole premise is based on a lie, the Vow did matter – the YouGov poll stated the vow was the main motivation for voting NO for 3.4% of No voters. That means the vow created the single largest weekly movement in the campaign, stopping the YES momentum dead in the last week, and suggests that without it the result would have been even closer. But more importantly the “main reason” definition hides the fact it was a contributory factor for many, many more whose main reason lay elsewhere but were still undecided. Research done by Lord Ashcroft in the immediate aftermath of the referendum showed the VOW itself was just one of many promises of more powers which had a  cumulative effect of more powers promises was one of the main deciding factors. Ashcroft asked No voters what was the most important reason for them to vote No.  25% of No voters ranked “a No vote would still mean extra powers for the Scottish Parliament” as their most important reason for voting No.  It it is reasonable to assume a Yes vote was more than possible if those promises had not been made or if the people had known they would not be delivered.

Same old scares but some will fall for it -again

In Wednesday’s Leaders Debate Jim Murphy claimed full fiscal autonomy would result in a £7.6billion black hole in Scotland’s finances, based on calculations done by the Institute for Fiscal Studies. The problem is that his claim is just a load of scaremongering nonsense. More powers isn’t just about who pays the bills, it’s about the Scottish Government getting control over powers to create jobs, to create a fairer and more equal society that will make more people economically active, to invest in productivity improving measures that will grow our economy, to implement bespoke tax and regeneration policies that will increase revenues and, in the medium to long term, make the bills easier to pay.  It would also take negotiation on service charges and a fairer cut of defense costs, as well as debt interest payments that would reflect Scotland traditional fiscal contribution to the UK.  That would save Scotland from billions a year being ripped from our national accounts and labeled a deficit.  The best time to negotiate these is when Scotland holds the balance of power.

In short, if we have a black-hole sized deficit now under Westminster’s control then that is Westminster fault! Must we give Westminster more time with all the economic powers retained so it can do more damage to Scotland’s economy?

The Westminster parties don’t want Scotland to have more powers because if we made it work that would mean in a future referendum they wouldn’t be able to create uncertainty and fear, as voters would see the nation was pretty much independent already.

A staged movement towards more powers including full fiscal autonomy, an evolution rather than revolution, is what the people of Scotland have a right to expect. It’s what was promised during the 2014 democratic process and it had a major impact upon that process.

Everyone involved in the YES movement, no matter what party you back at election time, must start campaigning now to have the powers we were promised delivered – or it’s all been for nothing.

Do you think Scotland should be granted the powers it was promised, Yes or No?

Leave a Reply to leginge X