This page carries examples of our media coverage and will be updated every month. We are only sharing those where we were quoted or we created the news story, hopefully we have picked the most relevant ones for you.

Scottish Voters must send clear message – we won’t be ignored, The Daily Record, 13.05.19 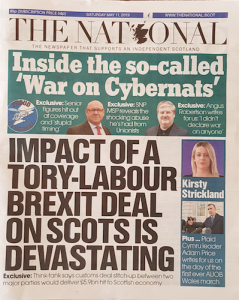 Scots business group rebukes claim that Glasgow ‘would benefit from Brexit’, The National, 30.11.18

Caledonian Printers search for rays of hope in the Brexit fog, Printweek, 11.06.18

Want to become a Yes ambassador? This might interest you … The National, 23.05.18 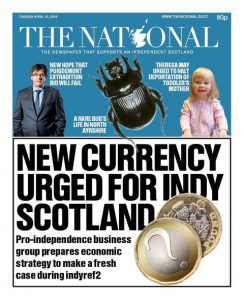 Business for Indy reveals policies to make economic case for indy, The National, 11.04.18

Indy Scotland ‘should unshackle itself from the pound’,

This economic strategy will champion a new political pluralism  The National 10.4.18

Lesley Riddoch: UK’s failure to protect Scotland brand is one of many reasons No voters are now thinking again, The National 21.12.17

Gordon MacIntyre-Kemp talks tax avoidance, land reform and the need to collect tax from large corporates to end austerity and balance the weight of taxation between large corporates and individuals (in response to Scotland raising of higher band income tax rates). 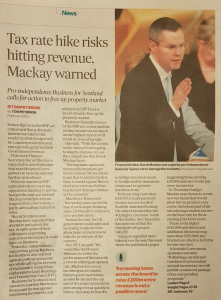 Gordon MacIntyre-Kemp speaks to Al Jazeera News Network about the importance to Scotland of remaining in the EU – Scotland pays 8.5% of the membership fee but receives 17.4% of all EU grants to the UK, so does proportionally better so a hard Brexit would be more damaging for Scotland.

Sturgeon must do more to woo SMEs if she is to win indyref2 says leading Yes supporting business group, The Scotsman, 26.10.17

Exclusive research on how voters are thinking about independence to be presented at SIC conference, The National, 16.10.17

Catalonia closely watched from Scotland to the South Pacific, AP and The Daily Mail, 11.10.17

Gordon MacIntyre-Kemp was interviewed by RT on…  Independence and self determination a growing global trend.

The RT interview provoked an unusual story from The Express;  the muddled headline suggested that Gordon MacIntyre-Kemp  ironically claimed Brexit is only about ‘nationalism’, when in fact he was claiming that it’s ironic that Brexit is actually all about nationalism. The comments are equally confused. The Express, 10.10.17

Even our competitors can’t help but mention Business for Scotland in their publicity interviews. This interview with Robert Kilgour of Scottish Business UK, a fledgling pro union setup, is behind the Financial Times paywall, but here’s our mention: 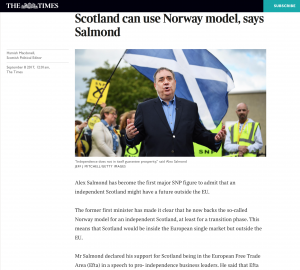 Scotland’s SNP must come up with ‘doable’ independence plan after Brexit – Salmond, Reuters 08.09.17

Alex Salmond calls for Scotland to be in free trade area to escape ‘full English Brexit’, The Herald 07.09.17 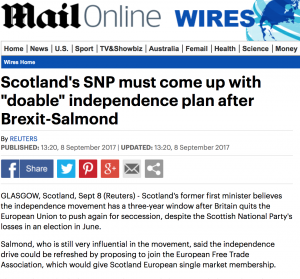 Scotland’s SNP must come up with ‘doable’ independence plan after Brexit – Salmond, The Daily Mail 08.09.17

Alex Salmond: Scotland joining EFTA should be on next independence ballot, The National 08.09.17 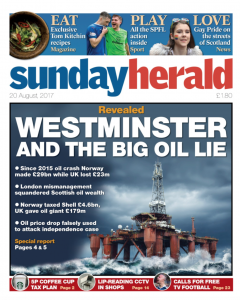 On the publication of our oil sector governance research

The truths and irrelevancies about Scottish oil, Common Space 01.09.17

Westminster and the big lie about Scotland, The Sunday Herald, 20.08.17

Oil mismanagement letter to The Courier 26.08.17

I still back independence but the SNP needs to get smarter, Kevin McKenna, The Herald 26.08.17 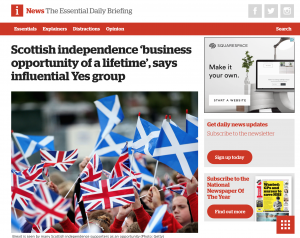 Independence offers business opportunity of a lifetime, The Scotsman 31.07.17

Time for wider Yes movement to campaign for independence, Kevin McKenna, The Herald 01.07.17

‘Ignore the unionist media talking down Scottish business’; our experts on the GDP figures, The National 06.07.17

Scottish businesses demand rethink on Brexit, GMK in The Herald 11.06.17 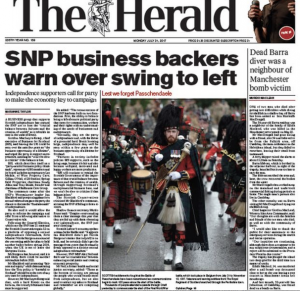 We don’t back any political party – this is the Herald getting it wrong.

Not oil but trade – the economic case for Scottish independence, Times of Malta (via Reuters) 23.03.17

On our predictions of a second Independence referendum 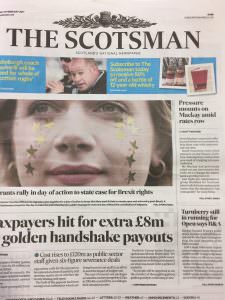 The day after The Scotsman front page carries our attack on the rates debacle, the Scottish Government changed its mind.

Derek Mackay to act on business rates as firms step up pressure, The Scotsman 21.02.17

– Second Scottish independence referendum ‘weeks away’ from being called, The Herald, 19.02.17

– What do business leaders think of Theresa May’s Brexit speech?, The Guardian, 17.01.17 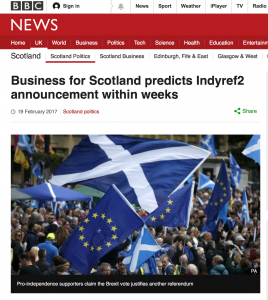 – Brexit would impact Scotland differently to the rest of the UK, says business network, The National, 09.06.16 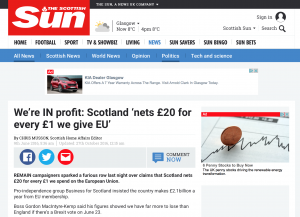 Electoral commission concludes assement of allegations against Business for Scotland and the SNP, The Electoral Commission 15.10.15

Scottish independence: From oil and the economy to the pound and the Queen, the hot topics driving the referendum debate, The Independent 14.09.14

Scottish independence: which businesses are in the Yes or No camps? The Guardian 10.09.14

BBC World at One 27.01.16, CEO and Founder of Business for Scotland, Gordon McIntyre-Kemp speaks on the Aberdeen City Deal 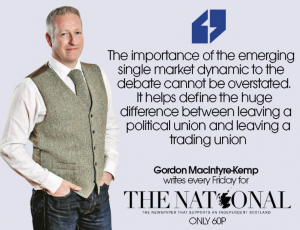 Also every Thursday in The National Newspaper our Chief Executive Gordon MacIntyre-Kemp writes Scotland’s most talked about and influential economic and business policy column.