If independence is to prevail then its supporters must offer a pluralistic, forward-looking path to stability and prosperity through the powers of independence and then contrast that to the economic damage and loss of global status that comes as part of the UK’s Brexit package. Whether soft or hard Brexit (or as I suspect; something in between), all forms of Brexit will hit Scotland harder than elsewhere in the UK.

I believe that an overwhelming discussion ending in an independence vote of around 60 per cent can only be delivered by winning over those who voted No in 2014 (with a heavy heart) due to their vulnerability to scaremongering on economic worries, their fear of upheaval and uncertainty, and resistance to change. Independence will be delivered through the votes won by addressing the concerns of conservative, traditional thinkers.

I don’t mean conservative as in voters of the Conservative Party but conservative with a small c – as in traditionalists who value stability, venerate institutions and traditions, who fear radical change, and whose values include positives that match the independence cause such as character, virtue, self-reliance, discipline, heritage, enterprise and sustainability.

Traditionalists vote for Unionist parties largely because they fear the change that independence would bring to the institutions and traditions they value (purely because they value traditions and institutions).  They can be Conservative, Labour or Liberal voters, some even vote SNP as many SNP voters didn’t vote for independence.  All traditional parties are full of conservative thinkers regardless of their position on the left or the right of the old-fashioned political spectrum.

You won’t be surprised to hear me say that an independence prospectus that comes from the right is bound to fail as it would alienate the left-of-centre voters who voted Yes last time. However, we also need to understand that one that comes exclusively from the left will also fall because it will alienate the soft right-of-centre Yes voters from 2014 and put up a barrier to the newly confused traditional thinking swing voters created by Brexit. I will be blunt – there are not enough on the left in Scotland to guarantee a future Yes vote and younger left wing radicals are the demographic least likely to vote.

A left-wing independence prospectus just helps Jeremy Corbyn who is an old-fashioned socialist, and offers nothing but Unionism and more of the same outdated, failing political spectrum. In any contest understanding your opponent offers an advantage, but a large section of the Yes community seems to think the independence debate is about left vs right.

The enemy is not the right, it is the fear of change that traditional thinkers feel and that Unionism exploits. Voters that are victims of the fear spread by Unionists need to be engaged positively, educated, informed and protected from it. Aiming a prospectus at only half of the electorate (the left) simply increases the fear felt by the other half (the right).

The often used simplistic good-vs-evil analysis demonstrates that many within the movement don’t understand our opponents. First of all, traditional thinkers make up most Labour voters and they have the same values and fears as the Tory voters that need to be addressed. Secondly, Tories are not evil. Wrong maybe, but the idea that they don’t care at all is misguided at best, wilfully stupid at worst. Most Tory voters are not wealthy – the Conservatives couldn’t win elections if that were the criteria. They are traditional thinkers who sit mostly only slightly to the right of centre.

Traditional thinkers on the right believe in self-reliance, they believe that people who receive benefits rather than working are being encouraged not to work. They believe that if you damage people’s individual responsibility then you discourage hard work and enterprise.  They call it the moral hazard of the welfare state, they believe that by trying to help the poor the left force the poor into a cycle of dependence on the state generation after generation. I think thats 99% bollocks but its one of the most widely held beliefs in UK and US politics.

They believe that if the state intervenes then the markets don’t work effectively and people get poorer, and they believe that the Government shouldn’t meddle.  They believe as wholeheartedly as anyone on the left that poverty is a problem and want to end it. They just believe that individuals and not the state should do charity, that the market is the solution to poverty and growth, and that socialism creates a self-fulfilling cycle of failure.  They are more likely to be religious and attend church, and they see themselves as highly moral. So when an independence march is led by a huge sign that says “Tory Scum Out!” it sends a message to all traditionalist thinkers on the right that the independence campaign hates them and therefore they conclude that independence has nothing to offer them.

I am clearly not a traditional thinker, more a radical progressive and I believe you can’t have a strong economy without a strong society and vice versa. What’s the point of independence if we don’t start with a fresh set of political and economic values that can bring everyone together? A vision that measures the success of the economy in terms of its impact on society and investment in society as an enabler of economic success.

We must now focus on the huge opportunity to do things better than the UK. To get people accept that change is coming but that its poise change, and compare their new choice of the isolating, separatist, self-harming and xenophobic undertones of Brexit-led change with an international, inclusive, forward-looking, non-partisan change with a new economic approach.

We as a movement have to balance the values of traditionalists on both sides of the old political spectrum in a new pluralistic socio-economic approach. We should forget the old politics and forge a new coalition of the enlightened, win big and create a nation that sets the economic and political standard for this century, not the last.

Absolutely, there are those that will remain No voters at any cost, and I would advise not even engaging them. This article is about the No voters who were scared (often of being thrown out of the EU), who are now confused and see instability with every constitutional option and are now, due to Brexit, persuadable.   Call it triage – ignore those dead to us, or that would take too much work to convert and go after those traditional thinkers who are pro-European (even if EFTA is the option) and persuade them of the changed realities of the constitutional debate. I think there is a 60% debate ending win for Yes with that strategy, if paired with a pluralistic economic approach. 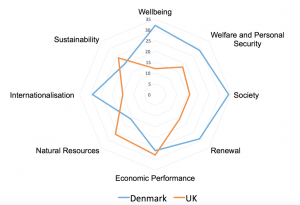 Pluralism isn’t political translation where parties try to persuade other parties voters that their polices actually solve their key issues when they don’t. Its also not pandering to the right to the left. Pluralism involves a new economics, an approach fit for this century and new Scotland.