Miliband’s no SNP deal – will further erode trust in his party.

The level of misinformation spread by Westminster politicians and the metropolitan media on important economic issues for political gain is simply unacceptable.

Despite repetitive car crash polls for the political champions of scaremongering and misinformation, it still happens on a daily basis. In Scotland we have a highly engaged electorate and highly developed niche social media and online news/debunking/economic sites such as Newsnet Scotland, Wings over Scotland and Business for Scotland, and of course a major player in The National. With access to alternative narratives Scottish voters are becoming immune to the negative commentary designed to keep Scotland in its box. However, these messages are more and more prominent in the UK right wing media and there is a danger that people in the rest of the UK could buy into the borderline racist propaganda that Scots are on the take.

A great example is the Telegraph story this week; “Scots enjoy the longest retirements”, that states: “Research has found that Scots give up work earlier than people in England and Wales to enjoy a longer retirement”. The whole point of the article is to debunk the SNP’s policy on refusing to raise the age of retirement for Scottish people, because they die younger. There is just one small problem with the Telegraph article though – it’s all complete garbage. My research on retirement ages and healthy working ages helped make retirement age planning an issue in Scotland, and so it took me two seconds to know the Telegraph article was nonsense (some of you might have got it in one!).  However I worry that such misinformation is fuelling anti-Scottish feeling in the rest of the UK. Kelvin McKenzie even added this new non-fact to one of his moronic anti-Scottish rants.

Here is the problem; the Telegraph headline is based on a survey of 1,000 people throughout the UK with a small sample in Scotland. The survey asked people at what age they think they will retire and when they thought they would die. In other words, it bears absolutely zero relation to what age people will actually retire or have actually been retiring. Respondents in Scotland thought they would both retire earlier than people in the rest of the UK and that they would die younger so they don’t necessarily expect to be retired for longer.  The second, and completely fundamental error in the Telegraph’s analysis, is that the people in England may expect to retire later by working past retirement age or taking part time jobs to supplement their pensions BUT only 2% (same as Scotland) defer their state pensions whilst continuing to work so they don’t spend less time in receipt of pensions that those that retire at 65. This means that if they live to their lower than average lifespan then Scottish pensioners will receive between £10,000 and £11,000 less during their retirement, despite paying the same percentage of their wages towards that pension all their working lives. Regardless of this being a real “fact” the Telegraph has deliberately spread a false impression from its pages across the internet and into the political debate. 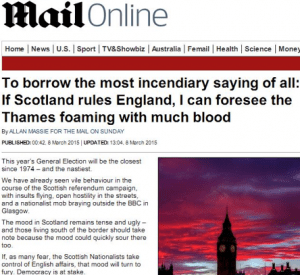 However, maliciously painting Scotland and Scottish people in a bad light seems to be backfiring. With every false headline and scare story the SNP’s vote seems to grow and grow, and no one can deny that something pretty amazing is happening in Scottish politics. One party is within touching distance of taking every seat in Scotland and the world’s media is starting to pay attention to Scotland for the second time in less than a year. They are looking for answers; is it policies, is it that Nicola Sturgeon (who some laughingly think came from nowhere) is the second SNP leader in a row to be head shoulders above the other party leaders, is it a hangover from the referendum? The truth is that it’s a bit of all of those things but most of all it is simply a question of trust.

Last year we saw the multiparty state of Scottish politics morph into a system with two distinct movements. Those movements were not simply Yes and NO, nor is it simply about left and right, it goes much deeper into the Scottish psyche than that. Scottish voters are coming to understand that there is a movement that believes in Scotland and one that just simply doesn’t. There are Westminster parties and Scottish parties and that is the divide. The Greens will probably get their reward for being part of the positive movement through Holyrood’s more proportional electoral system, but not at this General election.

That is what it all boils down to – trust. In all elections voters struggle to accurately explain more than one or two policies of the parties they vote for. They vote largely on the strength of the key beliefs of the party and the trust they have in the leadership. On Scotland Tonight Jim Murphy boasted his manifesto contained more than 190 policies but you may as well have a million policies if no one believes a word you say. When a party loses trust with the electorate, its vote shrinks to core levels. That is when only those ideologically tethered to a party’s core values will vote for the party. The Tory vote has been stuck at the core level for years but not died completely as there is nowhere else for the core Tory vote to go. The problem for Labour is that many Labour core values are inter-changeable with the SNP’s and so the prospect of Labour falling below the Tories in share of vote is a very real one if nothing changes.

And nothing is changing, even faced with the news that the SNP might take every seat in Scotland (52 is more probable) Jim Murphy’s only defence was: “this is very good news for the Tories”.  Everyone, and I mean everyone in Scotland, knows that if the SNP win 52 seats and Labour perform well in England and then they vote together there will be no Conservative government. Does he think a lie told more often becomes more believable? Ed Milliband further eroded that vital trust when last night he ruled out any kind of deal and then today Andy Burnham said of course we will deal with the SNP to get our policies implemented.

Are we as a people becoming immune to scaremongering, has the Westminster movement cried wolf too often? I think so, and becoming a country of independent mind will have profound effects on the politics of the UK long before the Scottish independence question is answered.