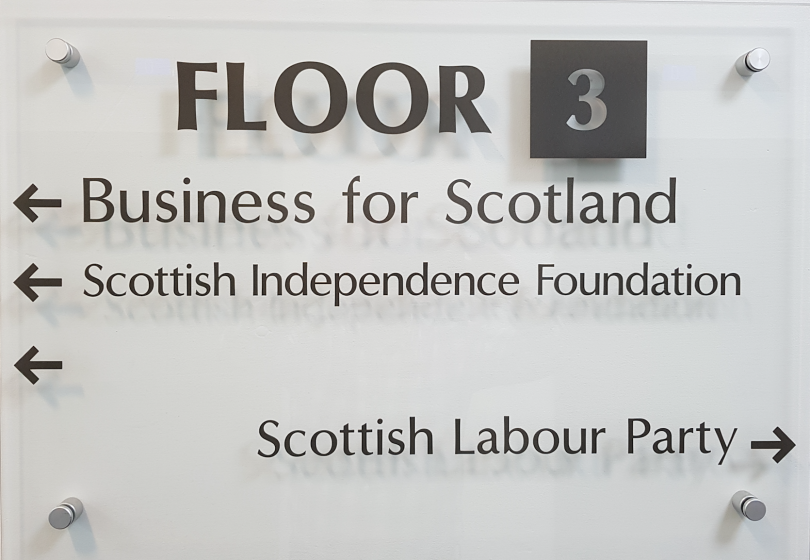 The last few weeks have seen All Under One Banner marches attract impressively large crowds in Glasgow and Dumfries. Business for Scotland (BfS), had a hugely successful launch of our Independence Ambassador Programme — aimed at training grassroots activists in the skills required to educate, inform and convince friends, neighbours and acquittances to believe in an independent Scotland. Finally, the SNP took possession of the Sustainable Growth Commission report. Research has shown that the Scottish people now trust that Scotland’s economy will thrive with independence – It’s all kicking off.

The SNP has realised it can’t wait any longer as the grassroots part of the movement is self-organising and getting ready to win a referendum in this term of the Scottish Parliament.

The constitutional question has changed: everyone knows there will be a new Scottish independence referendum, we just need to watch how Brexit plays out and use the fact that the Scottish First Minister will be able to choose the timing to our advantage.

Worries about a snap General Election and Westminster refusing a Section 50 order are red herrings. The movement and the SNP can turn those to our advantage if they happen, but I doubt it will come to that. What really matters, and what has really changed from last time, is that the grassroots movement is taking the lead. Local groups are reactivating right across the country and national groups are reforming — not BfS, however, as we never went away.

I remember attending the launch of Yes Scotland in May 2012 and watching the difficulties it had getting up and running; good people but a top-down, traditional, clumsy, costly campaign that struggled to service the needs of the local Yes groups, who ended up doing the bulk of the effective campaigning. Looking forward I can clearly see that the single largest advantage the independence movement will have next time is the ability to mobilise grassroots support. Literally tens of thousands of indy supporters are willing to campaign, to take to the streets, to deliver leaflets, canvas and just chat and answer questions.

There is not, nor can there be, an alternative movement on the unionist side. They are completely dependent on the biased media to make their case because post Brexit Britain of Davis Johnson, May, Mogg and Farage doesn’t inspire anyone to campaign.

Predicting the winner depends on deciding whether you think its better to have a dying mainstream media or the burgeoning grassroots activist army in your corner.

The media also can’t be so biased this time around, with support for independence in the mid-to-high forties. Those that like to back winners have a problem and won’t want to lose any more customers. Also, Brexit clashes with most Scottish editors pr0-EU stance and that means that only hardline Tory editors will still feel at ease taking a strong anti-independence line, when staying with the Union has a guaranteed downside.

The SNP Growth Commission report has also impressed the people it was supposed to impress: the SNP has taken the policy weak spots from 2014 and turned them into tanks which they have duly parked on Westminster’s lawn.

So if we want to win we need to motivate, train and fund our grassroots campaigning capacity, and SIF will oil the wheels and get the movement going. We don’t need a huge central Yes HQ next time, we just need to support the groups with key messages and research so that campaign materials can be more locally targeted and let the Yes groups get on with it.

Grants from SIF that build capacity in the Yes movement, that assist in training, the production of campaign materials, the creation of messages, and drive research as well as helping to create more local groups, is manna from heaven to the independence cause. Getting across the game-line will take a huge team effort, but the grassroots campaign is one of our star players, so we need to make sure they are match fit. The SIF initiative will do just that.

An important role for SIF is that it helps spread the funds available to campaign for independence more evenly. Some independence supporters have the ability to run large crowdfunding pushes, others have great plans and big ideas but don’t have the seed funding required to get going. National groups have larger operational costs — here SIF grants can be used to encourage donors to make matching donations and get campaigning projects launched more quickly. It’s the missing cog in the independence campaigning machine.

SIF has a few star players of its own with the Proclaimers and Elaine C. Smith donating and sitting on the board. I have been fortunate enough to meet most of the key players and it’s a great team. The founder, Willie Wilson, who also helped founded NHS for Yes, is both a personal friend and a bit of a (independence campaigning) hero of mine.

They are not aligned to any political party or any other independence group, and so what I am saying is that I believe in them and their goals wholeheartedly, and you can trust them to make a difference.  I hope it grows and grows alongside the rest of the grassroots independence movement.