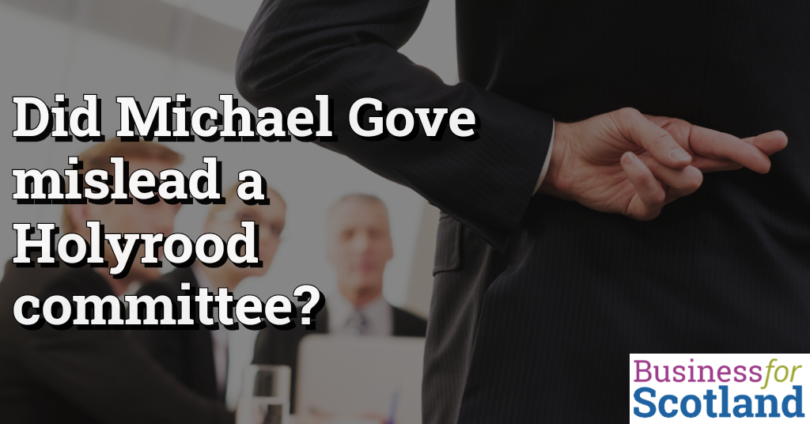 The UK Government promised to replace the EU funds that Scotland has lost because of Brexit. But it is falling short. And Michael Gove appears to have misled a Holyrood committee on this  – although he has an obligation to know the real facts and to pass them on honestly.

The UK Government claims that its “Shared Prosperity Fund” will match EU structural funding by 2024 – if it counts the tapering off EU funds. Reporting of the story could be criticised for not fact-checking this assertion.

In fact, the UK Government’s sums don’t seem to add up – and it has not released any detailed figures to back up its claims.

Michael Gove, levelling-up secretary, said the new Shared Prosperity Fund would make good on a manifesto promise that the UK government would “at a minimum match the size of these funds in each nation”. He claimed it would replace EU structural funds – but only by 2024-25.

He said the UK Government was counting EU money which is currently ending – leaving many organisations which depend on it facing a cliff edge at the end of 2022. But, even in the third year when there will be virtually no EU legacy structural funding still flowing, Gove’s sums still don’t add up.

Scotland is being allocated £212mn over three years in the UK Shared Prosperity Fund.

It is difficult to find exact figures – but there is no available evidence that Scotland will still be receiving anything like that shortfall in EU money in 2024.

The Scottish Government has calculated a sum of £162 million per year would be needed to replace the EU grants at current level from the:

This rises to £183 million per year when including

That is not even taking into account inflation, or what was estimated for the 2020-27 round, so even that would be a real-terms cut. If the UK was still in the EU, Scotland would have expected significantly more – the EU structural funding allocation to the UK for 2021-7 would have been more than £10 billion, about 30% higher than the previous round.

There are other sources of EU money that are not being taken into account by the Scottish Government in these sums because they are not included in the structural funds.

Scotland will also lose out on funding and opportunities from the:

On the plus side, the EU has a fund that could an support independent Scotland as it prepares to join the EU. The EU Instrument for Pre Accession Assistance offers EU membership candidates support for:

Another issue is that the UK Gov ‘shared prosperity fund’ will be handed out by Westminster. The Scottish Parliament won’t administer the money as it did when Scotland was part of the European Union.

The UK Government may not like the fact that Scotland has a Parliament, established by a referendum in 1997 in which 75% of voters voted ‘Yes’. Nevertheless, it exists, and using the “shared prosperity fund” to attempt to undermine it is undemocratic.

The way the fund is being administered leaves organisations which depended on EU funding like the Orkney Marine Energy Centre hanging, with no clarity about their future.

EU funds were awarded for 7 to 10 years with a transition phase allowing for continuity. There was transparency about the criteria for application to the funds and how projects were evaluated. The UK Government appears to regard such transparency as “unnecessary bureaucracy”.

The EU targets extra money specifically at areas at the periphery of Europe, because they are far from the main markets and face higher supply and infrastructure costs. Scotland’s islands got £20 million a year, for example. They will get far less now. The UK Government seems to believe that evaluating funding on a population and local average income is fair.

The criteria for the UK’s new “shared prosperity” fund are questionable and possibly politically motivated – for example, the Highlands and Islands are judged to be in “low” need of transport infrastructure  – the same as the City of London. The SPF and levelling up funds are both blind to peripherality. Critics say they are created in such a way as to enable the UK Government to target marginal seats.

To add insult to injury, Scotland’s accounts will also be debited by an estimated £3.04bn share of the Brexit divorce bill which Scotland will pay despite having voted overwhelmingly to remain in the EU.

The EU funding replacement “Shared Prosperity Fund” is a mess –

Reporters have not fact-checked the UK Government’s assertions

The situation for Scotland is similar for Wales, Cornwall and the north of England. There are particular concerns about the UK Government administering these funds in Northern Ireland. Much of the reporting of this announcement has been criticised for not making it clear that the “Shared Prosperity Fund” total is less than all EU funding streams, even in its third year.

For example, BBC online news in Cornwall reported the story with a positive-sounding headline “Cornwall to get £132m of funding for next three years” – only in paragraph three did it add “Cornwall was forecast to receive about £100m a year from the European Union before Brexit, the Local Democracy Reporting Service said.”

Even the Financial Times failed to check the numbers. The FT headline earlier this week was ; “UK fund fails to match EU development money, say Scotland and Wales”, but it reported; “The government has argued that it only needs to “match” EU funding levels by 2024-25 as the UK will continue to receive its final allocation of EU money until then — an argument that the Welsh and Scottish governments have rejected.” It did not make clear that even in its own terms, the UK government’s arithmetic is faulty.

Lawyer Alexander Rose who is a specialist in this area calculated that  EU funds would have invested £10.85 bn in the UK’s regions between 2021 and 2027, but the Government’s replacement fund is worth much less.

The UK’s shared prosperity fund awards for the UK

There is no transparency from the UK Government about their apparently dodgy figures on how the structural funds replace the EU award.  The House of Commons Treasury Committee report stated:

“The Government stated that the UK Shared Prosperity Fund will be the successor to the EU Structural Investment Funds. However, the Government is only providing 60% of the money provided by the EU fund. If the new fund is intended to be one of “the centrepieces” of the Government’s ambition, it is surprising that the size of the fund is being reduced to such an extent. The Government will need to demonstrate how these reduced funds will achieve their defined metrics for levelling up.”

Scotland was given a guarantee that it would not lose out on EU structural funding. This was a manifesto commitment when the Conservatives stood for election in 2019.  It said

“The UK Shared Prosperity Fund…will replace the overly bureaucratic structural funds – and not only be better targeted at the UK’s specific needs but at a minimum match the size of those funds in each nation.”

It doesn’t. And Scotland has lost access to many more EU funding streams and opportunities that are vital to the Scottish economy.

All the available figures suggest that Michael Gove’s evidence to a Holyrood committee was not in line with the facts. He added the words “I believe” to what he claimed, as if crossing his fingers behind his back. His evidence was quoted in a Holyrood debate.  It appears that in this case, Gove misled Holyrood.

The UK has an unwritten constitution based on the “good chap” theory of Government. That really means that it is expected that anyone holding high office will obey the conventions. These include diligently finding out the facts and passing them on honestly to colleagues in Parliament.