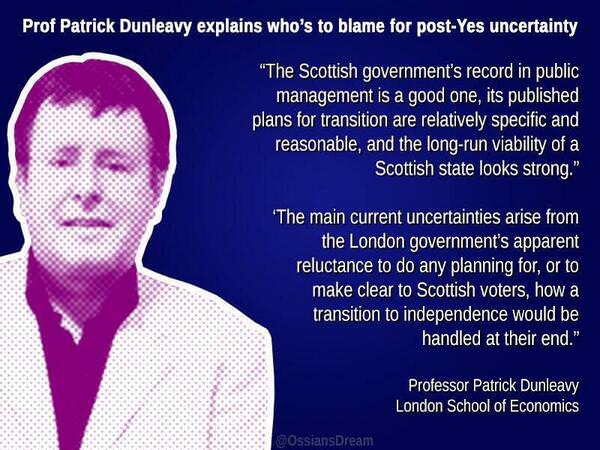 In a report released on Sunday, Transitioning to a new Scottish state, Professor Patrick Dunleavy of the London School of Economics (LSE) sets out the assessment of the LSE Public Policy Group on the costs and savings of setting up the departments an independent Scotland would require.

In the executive summary to his report Professor Dunleavy writes:

“Every transition to a new state has some uncertainty and a degree of risk. But there are no bases for extreme anxiety about an independence transition in Scotland.

‘The Scottish government’s record in public management is a good one, its published plans for transition are relatively specific and reasonable, and the long-run viability of a Scottish state looks strong.

‘The main current uncertainties arise from the London government’s apparent reluctance to do any planning for, or to make clear to Scottish voters, how a transition to independence would be handled at their end.”

Professor Dunleavy reiterates his assessment, last month, of the set-up costs as – up to £200 million. The Treasury mistakenly misused a calculation Professor Dunleavy provided to the last Labour government on the costs of setting up a new major Whitehall department by applying this calculation to the cost of establishing 180 public bodies in Scotland, many of which are already in existence.

The Treasury’s first £2.7 billion calculation was then revised, but conflated the IT costs of new systems in their revised calculation of £1.5 billion. As Professor Dunleavy points out these are longer-term investment costs with potential to generate long-term savings and are subsequent to the establishment of a new department.

The LSE report has identified the six directorates the Scottish Government presently operates would be expanded to nine reconfigured directorates. At present the Scottish Government operates with 5000 civil servants. Professor Dunleavy estimates that around 22,000 civil servants would transfer from those already working for HMRC, the UK DWP and Foreign Office.

Professor Dunleavy writes that there would be ‘a big change in the scale of the civil service, but not much change in how it operates’ in Scotland at present.

The Civil Service structure in Scotland follows a modern governance ‘directorates’ structure that the report describes as an effective way of organising, in contrast to the deeply embedded ‘silos’ of Whitehall departments.

Efficiencies in set-up and learning from Westminster’s mistakes

The LSE authors have identified 206 UK public bodies relevant to Scotland and have put forward their assessment of the number a modern governance structure, as operated in Scotland, would require to complete the transitional process to full statehood. Reducing 206 bodies by 70 to 136 represents a reduction of a third and would achieve considerable long-term efficiency savings.

Referring to a 2010 study examining changes to Whitehall departments over a 30-year period, Professor Dunleavy writes, “we heard many horror stories of the incredible behaviour of UK Prime Ministers in forcing through badly designed changes of departments over a weekend.

‘In one extreme case a top minister was two minutes away from arriving at his new department during a cabinet reshuffle and Whitehall reorganization, when the department was suddenly merged by the PM with another one. The minister had to be made Foreign Secretary to compensate him for the shock of it all.

On the cost of new IT systems Professor Dunleavy’s report is remarkably helpful in demonstrating Scotland could gain a major cost advantage in introducing new IT systems for tax and welfare. He notes fully half of UK major IT contracts are due for renewal at the same time and points out renewal is expensive which he describes as ‘a very costly and often shambolic process in UK government.’

The report concludes Scottish taxpayers will have to pay for modernisation spending  ‘whether the nation votes Yes or No.’

He notes that IT is cheaper and more effective in states with a population of 5 to 10 million and cites Sweden as an example of a country with more modern and flexible systems.

Professor Dunleavy examines, in useful summaries, key examples of costs and savings in the establishment of the Scottish Security and Intelligence Agency (SSIA), The Scottish Defence Force, Foreign Affairs, and Taxes and Benefits departments to fully complete the transition process.

He concludes, ‘The long-term viability of an independent Scottish state is generally high.’

Russell has worked in advertising and publishing. He was a board member of Loch Lomond and the Trossachs National Park from 2002 to 2010. Russell is a partner in Diverse Marketing and Twinlaw Publishing and is currently Chair of Borders Writers' Forum. He has also written for online news sites and is editor of voteyesborders.com.