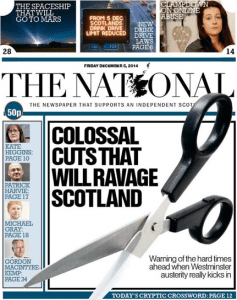 This article first appeared as a personal column by Gordon MacIntyre-Kemp in the National Newspaper on Friday December 5th and is reprinted with their permission.

Britain is failing and the people have lost faith in our Westminster system of Government and our failing institutions.  Politicians and the Westminster Parliament used to command respect but expenses scandals, cash for questions / peerages and the failure to push reform in anything other than a piecemeal haphazard way has diminished trust in the UK.  This  diminished trust is manifesting itself in Scotland through increased support for maximum devolution, (in Lord Smith’s language ‘bags of sweeties’) and for independence, (owning the sweet shop).  It represents a growing realisation that there are better, fairer, more equal, engaging, local and workable forms of government.

The heart of the problem

The problem at the heart of all that’s wrong with our society is that the UK is far too centralised around London and the south east.  Power, money, opportunity and influence has been drained from the rest of the country for generations towards a metropolis that has developed its own financial and capitalist culture which sits a world apart from the distant regions and nations that make up the wider UK.

London is bleeding us dry and we need to rebalance the UK with the right level of devolution and/or independence for each region and home nation.  There is burgeoning support within Scotland for more powers for our parliament, for our councils and even local communities.  Decentralisation and subsidiarity will become the political watchwords and a full-on UK wide battle will rage between the champions of progress and of the establishment.  Sooner than you think we will know if this road leads to independence after the next UK General and Scottish parliament elections and the EU in/out referendum.  We already know that the No campaign’s victory in September was a pyrrhic one at best, and the forces of progress are stronger now than they were before the referendum. The gift of extolling a positive vision is one that keeps on giving.

Since the decline of the industrial age, prosperity and population has been sucked southwards; it started slowly in the sixties but accelerated quickly over the last 30-40 years.

The de-industrialisation of Scotland has left many communities, both rural and urban, without jobs and without hope. This deterioration accelerated rapidly as the UK focused on finances and allowing market forces to control economic policy, first under Thatcher but then even more so under consecutive New Labour / Conservative governments with over-reliance, in particular on financial services, in London and the South East.

By 2020 the UK Government expects London and the South East to each experience a one million increase in population. This, on top of the fact that the population there has already roughly doubled in my lifetime.

Centralisation towards capital cities is not inevitable, it is a policy. Does Washington dominate New York, does Canberra overwhelm Sidney, does The Hague overshadow Amsterdam?  No.  London is, as Vince Cable once admitted, “becoming a kind of giant suction machine”.

Roughly one in three UK voters lives in London and the South East, and to form a UK Government political parties need to offer policies to suit them. So Scotland always gets a right of centre, finance and City of London dominated government, regardless of who we vote for.

Voters of the South East are fed a media message about the other home nations and regions that suits the metropolitan media, so they will never understand nor support moves towards federalism or independence.

Westminster still sees devolution as a game of how few sweeties can it give away. This results in slow and painful progress. You might argue that at least it’s progress, but the pace is so frustrating its akin to filling a bath so slowly that by the time its full the water is guaranteed to have gone cold.

Britain is failing, not just economically but politically and democratically.  The problem is not political parties but a failed system. No change of Government without a far more significant change in the devolution of power that is suggested under Smith can make a difference.

It is time to have business and economic policy decisions that impact on the social needs of the people of Scotland, made by the people of Scotland. It is time to redesign the way we run the whole of the UK to speed up our journey to federalism and localisation.  Critics will say that will inevitably lead to independence for Scotland and they are right.  However, the Westminster game of giving away a few sour sweeties and keeping the good ones for themselves will alienate the 55% and lead to Scotland becoming independent before the decade is up.