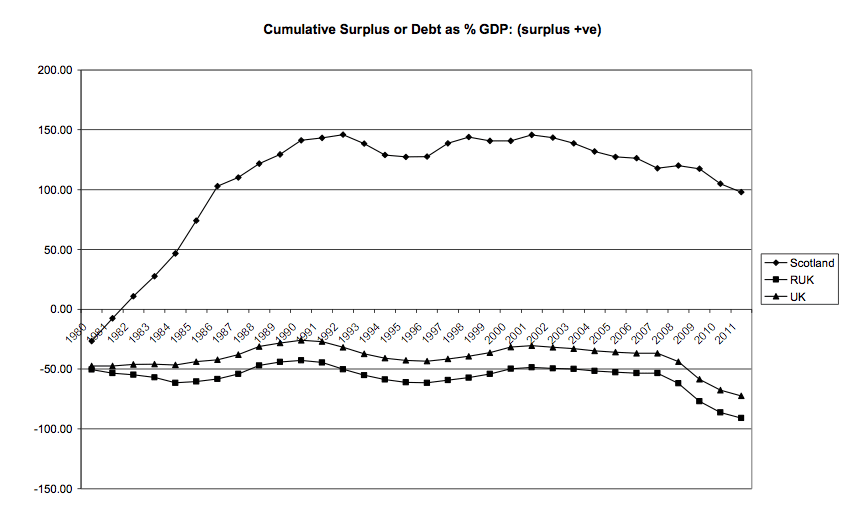 The Jimmy Reid Foundation, a leading think-tank, has released new research which proves that an independent Scotland would currently be recording a vast surplus.

The report, by former Scotland Office economists Jim and Margaret Cuthbert, references the Business for Scotland article ‘The accounting trick which hides Scotland’s wealth‘, which found that an independent Scotland would have been at least £50 billion better off as an independent country. Based on similar arguments and the principle of equity in the Vienna Convention, the economists conclude that Scotland is owed billions of pounds from this period and therefore should take a lower level of Westminster’s debt.

The Reid Foundation analysis is based on Scotland’s strong tax revenues which have been constantly above the UK average. This means that Scotland’s wealth has drained into the UK Treasury for decades with a lower percentage of spending being sent back to Scotland through the Westminster bloc grant.

An independent Scotland would have been £148 billion better off

The staggering findings of the report consider the fiscal impact of independence since records were available. They conclude that an independent Scotland would have been £148 billion better off. Scotland’s financial position would have been closer to Norway’s, including a Sovereign Wealth Fund of over £100 billion savings.

The calculations make the case presented previously by Business for Scotland even stronger. The report states that “given the very high rate of inflation and associated high interest rates in the early 1980s, [the Business for Scotland calculation] is actually very conservative”. Even when taking into account that Scotland’s share of UK debt, Scotland would have quickly moved into a strong economic position and become one of the most prosperous countries in Europe and globally. 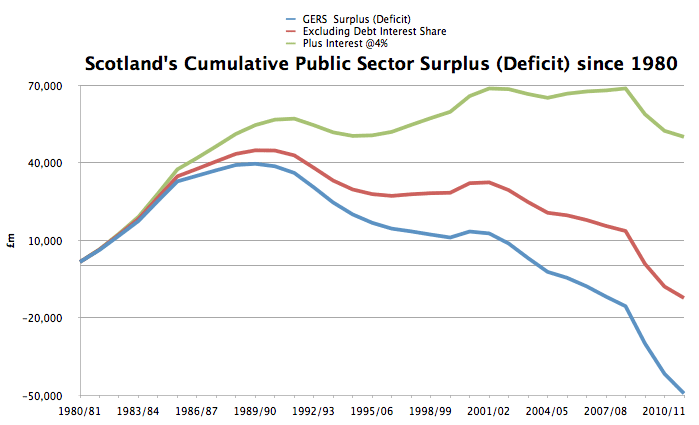 Previous Business for Scotland research found independence would have brought prosperity and no debt. The Cuthbert Report describes this as “conservative”.

The report finds that across previous decades Scotland’s strong economic surpluses were wasted and propped up Westminster’s failing economic model. In the economic analysis, this defines the Westminster political system as an “improperly functioning union”. In this model, a centralised government unilaterally decides that revenues from one part of the union is used to fill a short-term fiscal black hole; no investment policy is designated for medium to long-term economic stability; and therefore, due to these revenues masking industrial decline, the entire union is left with crippling debts and liabilities.

The figures from previous decades illustrate that Westminster’s political and economic failure has squandered Scotland’s resources and left the entire UK with a debt mountain of over £1.3 trillion. This represents the catastrophic mismanagement of economic policy as well as a dysfunctional political settlement.

How this will inform the independence negotiations

Article 40 of the Vienna Convention sets out the protocols for dividing state debts on the principle of equity. This establishes a number of principles including the need for a fair division of assets and liabilities and the consideration of what created the state debt.

These figures demonstrate that Scotland was not responsible for the creation of Westminster’s debts. In fact it was Scotland’s surpluses that spared the UK from economic collapse. On this basis the Reid Foundation report says that Scotland should aim to fairly reduce its debt inheritance to a level far lower than the position of the Scottish Government suggests.

The Reid Foundation report highlights the dire economic incompetency of Westminster Governments over several decades and the wasted opportunity to transform Scotland’s economy.  While the past cannot be undone, this September provides  another opportunity to place Scotland’s resources and talents in our own hands.

Scotland remains in a stronger economic position than the UK as a whole. The only way that the resources of a wealthy nation can create a wealthy society is through controlling the economic powers of an independent state. Taking that opportunity can alleviate the impact of previous economic errors and move Scotland towards greater prosperity for its businesses and citizens.

Where does Scotland’s wealth go?