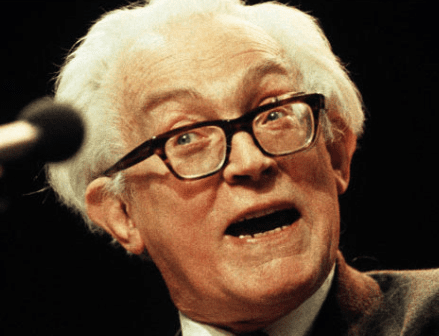 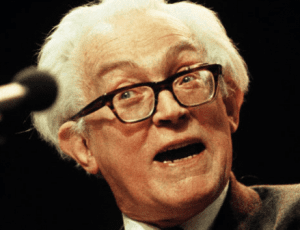 Michael Foot was an intelligent, socialist, principled and totally unelectable.

As a younger man I used to think politics was boring. It seemed to me that politicians were drab, old, slightly overweight white men in pinstriped suits who swapped benches in Westminster every few years, with one side ruining the economy by spending too much and the other by not spending enough. Possibly a simplistic view but in short I thought Westminster was an outdated bastion of privilege and ideological but utterly impractical debate; apparently nothing changes.

My earliest political memory is watching a news item on Michael Foot, a highly intelligent, highly socialist, scruffy, older, principled politician who had just become Labour leader. All the papers derided his Prime Ministerial qualities, called him a leftie and highlighted that he got the toggles on his donkey jacket fastened up the wrong way.  I was too young to vote but I remember thinking that I wouldn’t vote for him. Labour’s 1983 manifesto was a socialist masterpiece championing higher personal taxation especially on the wealthy, more interventionist-led industrial policy, (that’s what we used to call business policy), unilateral nuclear disarmament, abolishing the House of Lords, nationalising banks and leaving the EU, then called the European Community.
Déjà vu is an interesting feeling; With Foot in 1983, just as now with Corbyn, the left thought they had an uncompromising, principled, socialist politician to admire but the cold hard fact is that it is easier to admire such politicians than it is to make them Prime Minister. Labour’s own Gerald Kaufman called the 1983 manifesto the “longest suicide note in political history”.  If Corbyn wins the Labour leadership race on an almost identical manifesto against a background where voters in England have moved significantly to the right in the last 30 years, then Labour’s next manifesto will be more of an obituary than suicide note and civil war will ensue within the Labour ranks.
None of the leadership contenders would help deliver meaningful powers for Scotland nor would they stall Scotland’s steady progress towards independence. If Corbyn wins, Labour party infighting and unbridled press character assassination will combine with the weight of corporate London to sink Labour in the UK polls.  Those who are open to independence but were swayed by the idea of Labour unity across the UK, will realise Labour won’t win for a generation independence will rise in the polls.  If any of the other candidates win then we are back to Labour triangulating Tory values, that doesn’t wash in Scotland, so independence will rise in the polls. 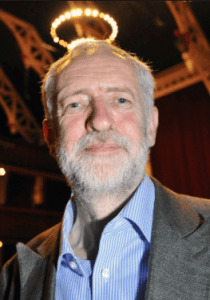 The Corbyn media hysteria has missed the fact that like Foot, he is no fan of the EU and if he doesn’t effectively champion the EU, then the scenario of England voting No to the EU and Scotland voting Yes becomes probable, with all its constitutional consequences. This means the SNP must have an option on a second referendum in their 2016 manifesto. Imagine Labour looking unelectable for a generation, Scotland dragged out of the EU against its will and a majority Scottish Government unable to call a referendum Yes would win. That would be a hideous mistake and out of character for the SNP. The other factor at play with a Corbyn win is that his policies will go down better in Scotland and some say that may convince left leaning Yes voters back into the Labour fold. This is slightly ironic as Corbyn is a product of Nicola Sturgeon’s barnstorming TV performance in the UK General election when she firmly put anti-austerity on the agenda and opened the door for Corbyn.

This means that without an option for a second referendum in the manifesto, the glue that will binds those voters to the SNP will not hold.  The SNP manifesto needs to make three things clear; firstly, that no one can impose nor deny the sovereign right of the Scottish people to hold a referendum. Secondly, that unless there is a material change in circumstances, the SNP has no plans to hold a referendum in the next parliament. Thirdly, if there is a material change in circumstances and the people of Scotland want a referendum, then the Scottish Government will retain its ability to call one.  To leave an option to hold a referendum option out of next year’s manifesto would leave the Scottish Government powerless to combat Westminster interference and would stall the Yes movement’s momentum, create disagreement within the SNP and leave the door open for a Labour comeback in Scotland. In a system designed to stop any one party winning a majority – sorry, designed to stop the SNP from winning a majority – it would be foolhardy to assume that the SNP are immune to electoral cycles and can continue to break the system and win back-to-back-to-back majorities when the next election is still nine months away.
A week is a long time in politics and with the SNP holding all but three Westminster seats, likely to win a similar number of first past the post seats and another majority in May and probably to end up controlling almost every council in Scotland before 2021, the weight of almost universal Scottish governance will weigh heavy on the SNP’s shoulders. A Labour comeback wouldn’t need to mean winning, just denying the SNP a majority would stall the gradualist movement to Yes.

How long will she last?

Here in Scotland, Kezia Dugdale has asked us to take a fresh look at Scottish Labour, called for new Labour faces to stand for Holyrood next year, then rather bizarrely announced a front bench that is almost a carbon copy of Jim Murphy’s failed team. Déjà vu is an interesting feeling; wait, did I say that before? If Dugdale really wants to rebuild Scottish Labour in time for the likely 2021 Scottish Elections, then her best hope is to fill the lists with her fresh faces and let her front bench face trial by first past the post. She won’t have the nerve, and only time will tell if my hunch that she won’t lead Labour into the next-but-one Scottish election is correct.

The fact that I can hardly muster a handful of sentences about Scottish Labour’s new leader in a column about the future of Scottish politics probably says it all. Everyone is talking about Corbyn as if he is some kind of political superhero but there is no such thing.  He is clearly against extra powers for Scotland and Scottish independence but some of his policies are quite good, nuclear disarmament and his take on quantitive easing for the people, but some amount to no more than unworkable and unelectable socialist nostalgia. My first political thought was that I wouldn’t vote for Michael Foot, my latest is that England won’t vote for Jeremy Corbyn.
Business for Scotland – Prosperity for Scotland – Join us now
Share670
Tweet194
Email
Share
WhatsApp
864 Shares