Two weeks ago Business for Scotland attended the ‘Festival for New Economic Thinking’ in Edinburgh. The conference’s focus was to bring forward and discuss various forms of alternative and new economic thinking. One of the presentations that I attended was by Kate Raworth who discussed a model she has put forward called Doughnut Economics.

Doughnut Economics is an idea that focuses on changing how we measure economics. Therefore, rather than solely looking at Gross Domestic Product (GDP), which takes into account the amount of goods and services produced within a country, we also take into account how a country is doing by measuring the level of poverty, education, gender quality, peace & justice, climate change, and biodiversity loss (amounts others, see picture 1).

The idea is that if we overuse our resources, we go beyond the circle. At this point, we are causing environmental damage to the earth which is not sustainable in the long term. However, if we are within the circle we have a shortfall of resources, such as people having limited access to food and clean water. 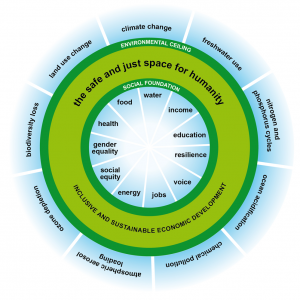 Kate mentions that we are the first generation to see a world with such an extensive overshoot in environmental damage such as air pollution and biodiversity loss, whilst having areas in the world with a shortfall in aspects including education, water and food.

In picture 2, the red in the graph depicts how we go beyond the boundaries of the climate, and the grey shows how boundaries are not quantified. For instance, 33% of people in the world do not have access to a toilet, and many others do not have access to fresh water Kate points out. For that reason, we need to construct an economic system in the world that meets the means of people, whist at the same time meeting the means of the environment. This means that we need to a create society where everyone has access to facilities such as water and food, whilst not overusing the planet’s resources. In that sense, our goals should be to move into the doughnut by reducing climate change, land conversion and biodiversity loss. We should aim to stay between the ‘ecological ceiling’  and the ‘social foundation’ and that way we would have obtained an inclusive and sustainable economic development. 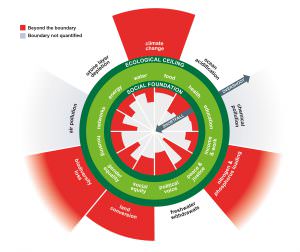 Picture 2: Areas of which humans are pushing beyond earth’s boundaries, and areas which boundaries are not quantified

Doughnut Economics also takes into account work in commons and work within households such as raising your children, creating a community garden and volunteer work. Kate includes this in Doughnut Economics because they create value to society, just not in monetary form. These are important contributions which shape our economic system and society, hence they should be taken into account, Kate points out.

In conclusion, Kate points out that we need to recreate the economic system and how it is measured. We need to stop teaching outdated economics to students, spread the ideas from new economic thinking such as Doughnut Economics, and create a push in society for policies that change behaviour to become more sustainable. We need to reshape economic thinking, and put it into practice.

For more information about Doughnut Economics, watch and read: