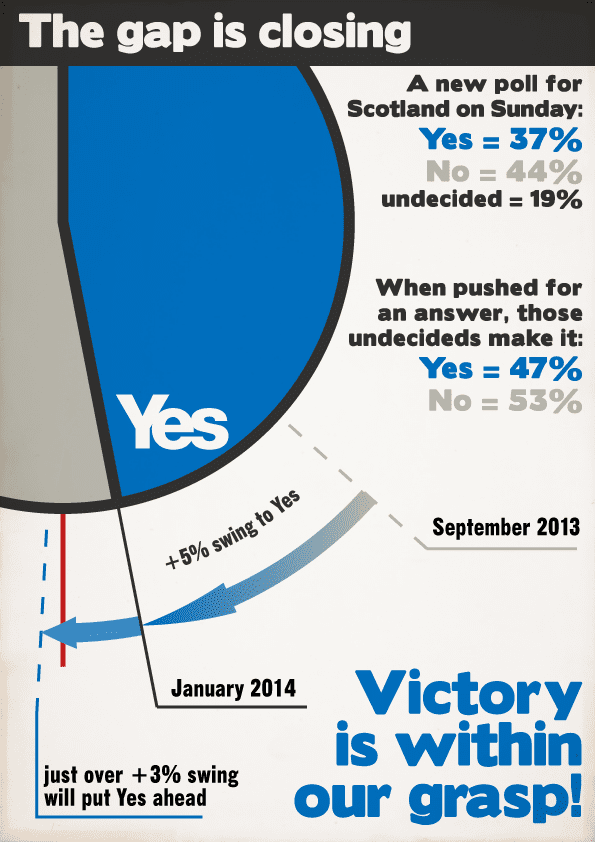 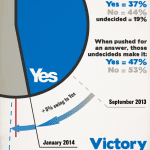 They say a week is a long time in politics but January must have seemed like an eternity to the No Campaign.

Although the No camp has named themselves ‘Project Fear’, they just don’t seem to be scaring as many people this year.  By our estimation, there have been at least ten major drags on the No Campaign’s progress in the last month.  They haven’t so much lost momentum as gone into reverse.

The most recent ICM poll shows a 5% decrease for ‘No’ and a 5% increase for ‘Yes’.  This 10% turn around puts Yes Scotland on the front foot. Its momentum is growing to the extent it needs only a 3.5% swing between now and polling day to win.  January was a terrible start to this crucial year for David Cameron, Alistair Darling and the anti-independence campaign.

The problem runs deeper than some might think. The swing was not all a direct switch by voters from ‘No’ to ‘Yes’, but also moves from ‘No’ to ‘Undecided’ and from ‘Undecided’ to ‘Yes’. It’s a conveyor belt which is only heading in one direction.  The direction of travel is clearly towards a ‘Yes’ vote.

Here are the 10 key triggers which got the polls moving and pushed the No Campaign into problematic territory:

Scottish Power has totally dismissed reports in the Spanish media, attributed to the UK “unionist parties”, that the company could be forced to break up after a ‘Yes’ vote. They said that it was “not an issue” and had not been raised “at any level”.

No Campaign representative Blair McDougall claimed the massive Norwegian oil-fund was created by way of higher taxes. However, the Norwegian Finance Ministry said that the fund is not sourced from taxation, but the revenues from the country’s oil and gas fields.

Another case of not letting the truth get in the way of a good scare story.

New figures from the Global Connections Survey demonstrate Scotland is one of the world’s top exporting nations with the economic strength to succeed as an independent country. Scotland’s exports were worth nearly £100 billion in 2012 alone, a 17% increase since 2008.

This is more sound economic evidence that an independent Scotland would be on a solid financial footing.

4) Leading think-tank: An independent Scotland would have been £148 billion better off

The Jimmy Reid Foundation, a leading economic think-tank, has released new research which proves that an independent Scotland would currently be recording a vast surplus.

Quoting and building upon Business for Scotland research they claimed our estimate of £64bn taken from Scotland was “conservative”.

Mark Carney, the Governor of the UK Central Bank, visited Edinburgh to discuss technical issues surrounding the establishment of a currency area after independence. His thoughtful speech demonstrated that an optimal currency area can be finalised during independence negotiations following interim technical work. The economic evidence demonstrates that a currency union would be in everyone’s mutual interests.

The No Campaign released a leaflet containing a misleading claim that Mark Carney had criticised the idea of a currency union after a ‘Yes’ vote.  This was clearly not true and forced the Bank of England to make it clear in response that Mr Carney’s speech did “not pass judgement on the relative merits of the different currency options for an independent Scotland”.

This was desperate stuff from a campaign in trouble. They hoped it would be a good day for them but it didn’t quite pan out like that. They and their allies in the media just pretended otherwise.

The announcement by the UK Treasury that it will underwrite all of the UK’s debts in the event of Scottish independence has been one of the most significant events in the campaign so far, with major implications – both economic and political.

The UK Government had to confirm its post-independence position to calm the markets. It makes sense to signal that Scotland and the rest of the UK will work out a fair and lasting settlement following a ‘Yes‘ vote.

A group of leading businesspeople wrote an open letter to the press sharing deep concerns about the likelihood of Scotland being ripped out of the EU against the wishes of both the people of Scotland and its business community. With the promise of an in/out EU referendum after the next election at which Scotland would most likely vote to stay in and the South East of England’s massive population would vote to leave.

We were lucky with oil but haven’t benefited the way we should have from the revenues it has generated up to now. There’s still more than half the oil left and we have struck lucky again with renewables. Hopefully Scotland won’t make the same mistake twice.

10) The No Campaign’s Foot in Mouth problem

London Tory No campaigners descended into chaos as a member of the House of Lords said independence would dishonour the war-dead.

First Tory peer Lord Flight (no we hadn’t either) added: “I am rather fed up with the Scots . . .ultimately I support the Union as a primary pillar of English policy for over 400 years”.

Honestly, you couldn’t make this up.

Another said independence would dishonour the war-dead.  While the Tory leader in Scotland Ruth Davidson distanced herself from the comments, former Secretary of State for Scotland Lord Forsyth criticised Ruth Davidson in return saying she was “young and inexperienced”.

He added “I will be voting ‘Yes’ in the referendum, because I am a patriot and I believe in Scotland’s future”.

On the very last day of January, Graeme Avery – an Honorary Director General of the European Commission who has negotiated the accession of 14 other member states – said that it was “manifestly in the interests of the rest the United Kingdom for Scotland to be a member of the European Union on the first day of independence.” He added that the “common sense” solution would be for Scotland’s membership to be effective from the day of independence.

So Scottish Power, the Norwegian Government, the Bank of England, the Jimmy Reid Foundation, ten leading Scottish business people, an Honorary Director General of the European Commission and a 102 year old war hero say that the No Campaign is either talking nonsense, insulting us or both.  How can anyone believe a word David Cameron, Alistair Darling and their “Project Fear” team say?

As well as polls indicating a shift towards independence, economic factors and reports are emerging that are changing the Scottish people’s view of our potential for economic prosperity as an independent nation.

Independence is the business opportunity of a lifetime. With the powers it brings we can help Scotland thrive. Of course, it isn’t just about Scotland. A sustainable expansion of the Scottish economy and a re-balancing of the British economy will be good news for all of our partners in the sterling currency area after independence.