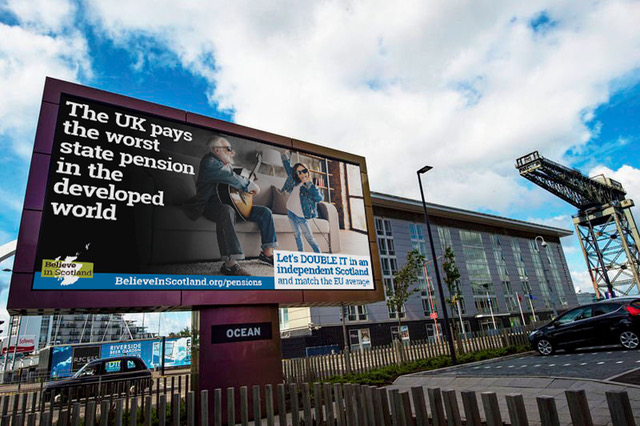 AFTER a worrying opinion poll and angry in-fighting within the SNP it’s time for the Yes Movement to unite around positive independence initiatives. Reports at the weekend brought news of developments which offer the chance to do just that.

Believe in Scotland yesterday launched a major new billboard campaign in towns and cities across Scotland focusing on a number of key messages, including boosting the state pension and creating  a successful economy with wellbeing at its core.

It was also revealed that the Scottish Government will publish the draft Referendum Bill within six weeks to pave the way for the second independence vote.

Believe in Scotland’s billboard campaign, which is also being rolled out on social media, this week focuses on Scotland’s right to have a second independence referendum. Another poster will highlight the fact that the UK pays the worst state pension in the developed world as a percentage of final earnings. It will urge a significant increase in an independent Scotland.

The campaign will take in more than 50 sites across Scotland.

Believe in Scotland has also collaborated with The National newspaper on the Yes Challenge project, targeted at soft no voters in a bid to persuade them to vote Yes.

The Scottish Government’s draft Referendum Bill has been promised since September, when it formed part of the First Minister’s programme for government. It is expected to set out the timing of the referendum and the potential question to be asked. 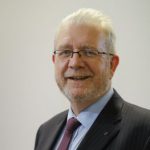 It will, said secretary for the constitution Michael Russell, ‘’open the door to the referendum’’. He added: ‘’It is a very simple, short bill and people will have the chance to then decide what they want to do – that is democracy.’’

The SNP  plans to include an explicit commitment to holding a second independence referendum if it is returned with a majority at the Scottish election in May this year.

If, as expected,  the draft bill is passed an SNP government re-elected in May would first seek a Section 30 agreement from Westminster, which would replicate that passed for the 2014 referendum. If Westminster refuses, a legal referendum would be held by Holyrood after the pandemic. If Boris Johnson wants to block it, he would have to argue his case in court.

These developments are positive initiatives which will give the Yes movement important issues to unite around after the in-fighting which has marred recent weeks.

After all, it would be complacent and dangerous simply to rely on the pro-union side to continue to make a mess of everything it touches.

The Tory Government’s Union Unit is threatening to step up its activities and to employ ‘’dozens more staff’’, tripling its payroll, according to recent press reports.

Rebranded as the Union Directorate – which sounds like something from the pages of a dystopian novel – it would adopt a ”more holistic” approach to the union. Reports suggest it would ”work with charities, opinion formers and civil society”.

Another Union Unit backed initiative,  the new Turing scheme to replace Erasmus + –  which until Brexit supported UK students to study and work abroad – has been dismissed as inferior by both the Scottish and Welsh governments, who are exploring ways of continuing with the previous arrangements.

Combine all that with the fact that the Union Directorate is led by Dominic Cummings’ buddy Oliver Lewis and its prospects don’t look good.

Similarly, the most recent plan unveiled over the weekend by former Labour Prime Minister Gordon Brown does not exactly set pulses racing.

Gordon Brown suggests the Tories at Westminster will work with the Scottish Government to deliver a stronger NHS and a greener Scotland, despite precisely no evidence that Johnson and his cabinet are in the slightest bit interested in doing so

Mr Brown has launched the ScotlandCan initiative, which will attempt to convince voters that Scotland can prosper and thrive without breaking away from the UK.

Launched through the former Prime Minister’s Our Scottish Future think tank, it promises to deliver the positive case for the union, which has been long promised but has so far reported missing in action.

ScotlandCan suggests the Tories at Westminster will work with the Scottish Government to deliver a stronger NHS and a greener Scotland, despite precisely no evidence that Johnson and his cabinet are in the slightest bit interested in doing so.

However, it would be foolish to dismiss these initiatives out of hand. The most recent opinion poll, carried out by Savanta ComRes, was the 21st in a row to show a majority of Scots supporting independence but the gap was narrowing.

The poll showed 53% support for independence, compared with the 47% who said they would vote to remain within the union. That was a fall in support of four percentage points.

The drop has been commonly attributed to in-fighting within the SNP, which reached a peak recently with the removal of MP Joanna Cherry from the party’s front-bench team at Westminster.

The opinion poll should sound a warning bell that Yes supporters need to unite around the independence campaign and not be distracted by other issues. Believe in Scotland’s campaigns and the approaching publication of the draft Referendum Bill provides opportunities to do just that. We should seize them with both hands.