The business community in the Republic of Ireland have welcomed the news that their government is ending years of economic austerity with its latest budget. The Wall Street Journal commented that: “Ireland’s government declared an end to seven years of austerity on Tuesday, announcing small cuts in income-tax rates as the first step in a three-year program to ensure workers hold on to more of their earnings while also increasing spending.”

Ibec, one of the largest Irish business networks with 7500 members, welcomed this news and declared that the budget, ‘…will add momentum to the recovery and send an important signal to taxpayers and the international community that our era of austerity is over. Ireland is again on the front foot.” The Construction Industry Federation Ireland welcomed the increase in capital spending that is vital for economies to grow and these comments echoed the sentiments from most of Ireland’s business community.

Business for Scotland have been calling for an end to austerity in Scotland, and indeed the UK, for the last 12 months, and we welcome this move by the Irish Government. Austerity measures in a recovering economy are counter productive, failing to support real growth or bring down deficits.

As we take on board this welcome news from Ireland here is an edited version of the article our Chairman, Tony Banks, wrote on the damage austerity does to businesses in this country for our Vision for Scotland Conference. It sets out exactly why we believe austerity is damaging to both business and wider society and should be brought to an end.

Westminster’s austerity damages business. It damages the economy and increases, not decreases, sovereign debt. Austerity makes it harder to do business, harder to make profits, and harder to keep employing workers, damaging the prospects for future business. The major political parties at Westminster are all signed up to long-term austerity measures, continuing to cut public spending and social investment, thereby causing long term damage to the economy. The current plans of George Osborne will take public spending down to levels not seen since 1948, and competition to see who can cut deepest and fastest appears to be developing at Westminster.

That prospect is worrying for Scottish businesses. We need social investment, we need appropriate levels of public spending, we need government to look at the evidence and invest in our economy rather than cut out of ideological blindness. The economy we operate in has already been damaged as a result of this wrong-headed austerity programme and we need an immediate shift from austerity to increased spend. That looks almost impossible in the UK; the fixation of all of those competing for high office in London is cutting public investment.

At Business for Scotland we contrast the position of those Westminster politicians with the political conversation in Scotland. We see the intent of the current Scottish Government to find the money for social investment, we hear the calls from campaigners for investment in a series of programmes, and we see a more considered appreciation of the economic outlook and what government can do. We see the contrast and consider that the best option for Scots businesses is full control of the economic and fiscal levers being vested in the Scottish Government. If this cannot be achieved with independence, then we must push for devo max, in order to address this issue.

Scots-born Mark Blyth, Professor of International Political Economy at Brown University, has written of the damage that austerity does to economies. In his essay ‘The Austerity Delusion‘ he noted that “every country that had embraced austerity had significantly more debt than when it started” and that there were no examples in history of a nation cutting its way to prosperity.

He identified factors which undermine the ‘stop spending’ argument: the uneven distribution of pain (the poorest get hit hardest) “is both cruel and mathematically difficult”; trading partners cutting their spending at the same time leads to contraction of the common economy; and public spending cuts do not promote private investment and do not boost investor confidence. Professor Blyth also noted the historical lessons of austerity from the first half of the 1920s and 1930s, the advantage that the USA gained by not indulging in the same austerity orgy as Europe from 2008 onwards, and lamented the increasing American austerity programme. He pointed to public works being left undone, learning being damaged and the skill set of the underutilised labour market atrophying.

Paul Krugman, Professor of Economics and International Affairs at Princeton University, has documented the effects of austerity in his blogs for the New York Times and on June 20th 2014 concluded that research suggested that “austerity equal to one percent of GDP reduces potential output by around 1 percent”, making “austerity a hugely self-defeating policy even in purely fiscal terms”.

Professor Brian Ashcroft, Emeritus Professor of Economics at Strathclyde University and Economics Editor of the Fraser of Allander Institute Economic Commentary, warned in March 2012 that “This austerity policy is a serious economic policy mistake that will arguably be remembered for generations to come” and added that “It is also an economic tragedy because of a risk a generation of employees may lose, or fail to gain, key employment skills that would be of significant productive use to the economy. Potential output will fall.”

In May 2013 he said that “Household demand, net trade and investment demand remain weak, while fiscal austerity continues with 68% of planned benefit cuts and 78% of current departmental spending cuts still to come after April this year” and added “Ironically, the UK lost its AAA credit rating not because of fiscal profligacy but because of austerity. The austerity has severely lowered growth and tax revenue prospects as affirmed by the IMF.” There is a strong economic argument against austerity based on the observation of the continued failure of austerity programmes to do what they are supposed to do and the damage that they do to societies and economies. 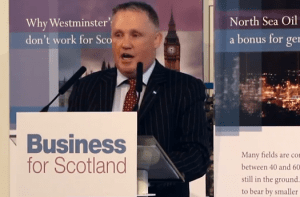 Tony Banks at the Vision for Scotland Conference

Austerity takes money out of local economies. Cutbacks in capital works means lower turnover for firms involved in construction and associated industries, and cutbacks in revenue spending means the same applies to firms providing services and revenue stream goods, so money is removed from the economy. As that money is removed the cashflow that powers local shops, tradesmen, leisure services, and local transport networks slows.

The long-term and continuing effects on business can be serious. As income  drops, expansion becomes less likely and contraction becomes a threat. Continuation of those conditions threatens the survival of businesses that are under stress. That tightens the screw again, increasing unemployment, reducing the cashflow in the economy, perpetuating a vicious spiral.

That spiral is made steeper, tighter and sharper by cuts in benefits. It is a blunt, cold and unavoidable fact that those with least resources are those who will spend the greatest percentage of their income on a daily and weekly basis as they buy essentials – surviving instead of living. Taking resources out of that subsistence economy is taking cashflow straight out of local economies, damaging the prospects of prosperity. Austerity is bad for business and the businesses worst affected are small and medium sized businesses (SMEs). 98% of Scottish businesses are SMEs – austerity is bad for Scotland.

Business needs an educated workforce and an educated pool of potential labour to draw new workers from. Not only do we need our employees to be able to read and write and count, we need professionals to work for us and with us. We need accountants, engineers, architects, lawyers, researchers, IT experts, scientists, and so on. We also need an educated marketplace with money to spend.  People who can understand the product are more likely to buy or invest and are more likely to recommend it. We need a pool of potential customers with the resources to buy – that is why graduates should not be leaving university with large debts. New graduates, earning a proper salary for the first time and not yet burdened with family responsibilities, mortgages and other repayments should be an economic driver.

The Scottish administration has, so far, been able to abolish tuition fees and provide bursary funding for some students, and we would like to see that go further with increased investment in education to grow that educated workforce and customer base. Continued downward pressure on Scotland’s budget would create tensions that would threaten this investment. 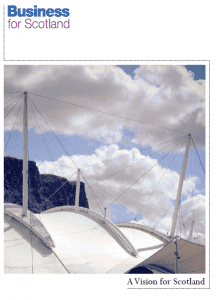 A Vision for Scotland

We need good infrastructure. We need excellent transport links to get our goods to the marketplace, to get our workers to and from work safely; to get our supplies to our manufacturing centres. We need telecommunications – internet facilities and telephone networks – to communicate with suppliers, customers, servicers, and with each other. We need efficient and effective utilities supplies to keep our businesses running.

We need that infrastructure properly planned and organised on a national scale and on a more regional scale taking account of the diverse needs of businesses in different areas of the country. Harris tweed manufacture in the Hebrides has different infrastructure needs from the oil industry in Aberdeen; a farmer in Galloway has needs which differ from a publisher in Livingston.

Dignity provides the foundation for hope, aspiration and ambition; those in turn provide the conditions for stability, quality and growth. A population shorn of that confidence produces an uncertain marketplace and a demotivated workforce. Without dignity; the belief that our fellow citizens will be afforded at least the basic essentials of life – food, shelter and warmth – the confidence, creativity and collaboration that business needs are replaced by fear, timidity and distrust that destroys the conditions that business needs to thrive. A customer without trust and ambition is a harder sell and therefore a cost to business. A society lacking belief that retirement will not mean years of penury is a society that fears the future and is therefore more cautious about spending in the present, making selling a harder business and making it more difficult for business to thrive.

If you agree that austerity needs to end and you want to be part of a business network that supports this position – Join us now.