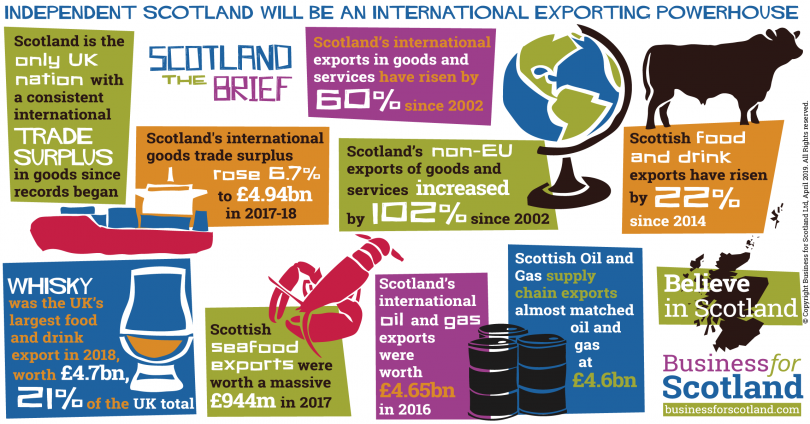 One of the key success factors in any nations economy is the ability to export manufactured goods.   Developing nations often export low value added good such as clothing, based on low prices achieved through low wages and manufacturing conditions with minimum environmental and safety standards or poor working conditions.  In highly developed economies, such as Scotland and our Northern European neighbours, it takes technological or natural advantages to develop the specialisms that create export demand at higher prices.

Scotland is an exporting powerhouse and has several significant advantages when it comes to developing those specialisms. Voted the worlds most beautiful country by the travel bible Rough Guide, our unspoilt green and mountainous scenery, lochs and rivers transfer a perception of significant natural value to our food and drink exports. 60% of our seafood landings are exported and Scotch whisky, which can only be produced in Scotland, accounts for 21% of the whole of the UK’s food and drink export trade with 41 bottles of Scotch exported per second in 2018.  Scottish Food exports are also skyrocketing up a massive 22% since 2014.

Oil and gas exports are also performing well and with the price of oil at $71.00 as I write this, we should see the value of oil exports increase again next year.  Oil and gas supply chain companies have also been looking to find contracts further afield therefor exporting the world leading expertise they have developed in the North Sea. In the last year we have figures for, 2016, supply chain company exports amounted to £4.6 billion almost matching the £4.65 billion in actual oil and gas exports.

So how does Scotland’s performance compare with other nations?  Well first lets look at the international exports of goods figures for the UK nations as compared by HMRC. Those figures show that Scotland is the only UK nation to have exported more goods internationally than it has imported every year since records began.  Northern Ireland has in the last few years been credited with a surplus but was persistently in deficit before then, England and Wales have run persistent deficits. England’s international trade deficit in goods is massive and troubling and so Brexit represents a clear and present danger to economic stability, given that the English deficit would significantly worsen and that London’s compensating finance sector dominance would be diminished. 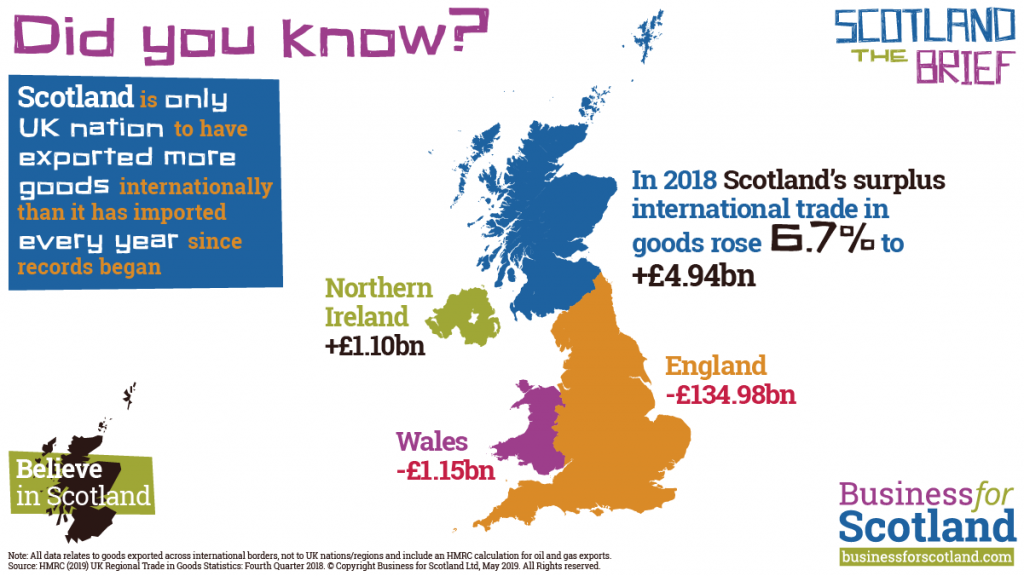 A surplus in international exports of goods is a key strength of Scotland’s economy but how does that comes to other medium sized Northern European nations and indeed the rest of the UK. 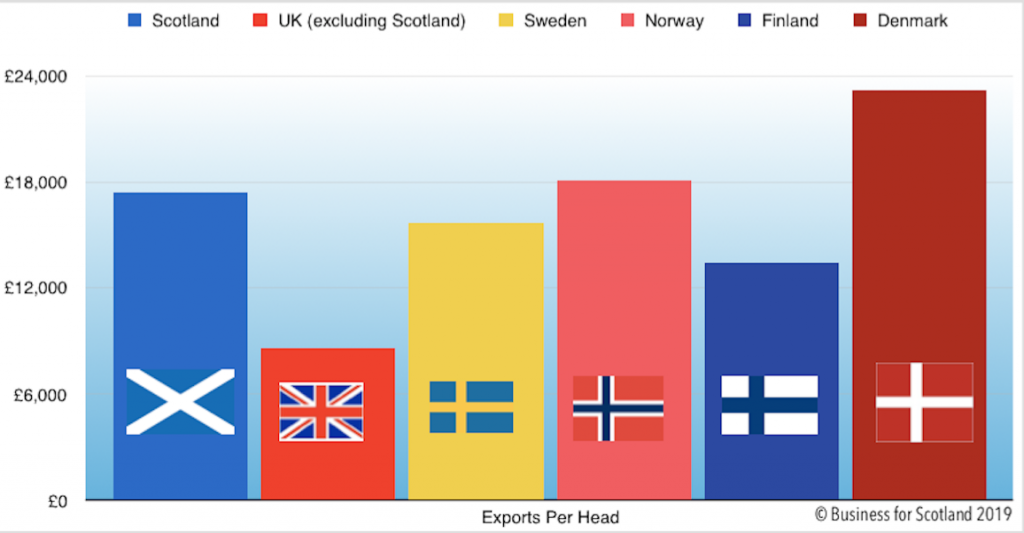 As you can see Scotland exporting success is nothing to do with being part of the UK indeed Scotland has achieved this success despite having no major container ports meaning almost all of its goods need to travel through England to be exported.  It is a Scotland’s reputation for quality, our natural resources and brand image that spans oil and gas expertise, to quality specialities such as Scotch whisky and the premium international buyers perceive, on our beef, salmon and seafood in particular, that drive Scotland’s exporting success.

Scotland’s far superior exports per head versus the rUK  (£17,455 per year for Scotland versus a staggeringly poor £8,626 per head for the rest of the UK) demonstrates that Scotland is an exporting nation whilst the rest of the UK is an importing nation. Scotland therefore needs a bespoke exporting strategy and that needs to include re-establishing Scottish container ports as currently almost all exports must go through ports in southern England which creates what is known as trade friction.

Norway’s public sector led management of their oil and gas reserves has meant they that make tens of billions more government revenues a year from their North Sea assets, Denmark has diversified from its over reliance on pork products (Danish bacon) and is a major pharmaceutical and machine parts exporter despite higher wages and living standards than the UK.

Scotland’s international exports support over 300,000 Scottish jobs.  For every 100 jobs supported by exporting an additional 66 jobs are supported through spill over benefits to the Scottish economy.  Exports currently account for 20% of Scotland’s economy (GDP) The Scottish Government has announced a policy of increasing that to 25% of GDP and create 17,000 new jobs in the next decade. This would add 2% to the economy and generate roughly £500 million in additional Scottish Government revenues per year.  Achieving a greater exporting ratio per head than nations such as Finland and Sweden and being close to Norway is a significant result but Denmark is clearly the nation that Scotland needs to benchmark against and the Scottish Government is making a start.

However, Brexit and potentially leaving the single market and customs union would be devastating to Scotland’s economy. Ironically our exporting success means that Brexit will impact more negatively on Scotland than on the rest of the UK. The Westminster Government is implementing (or trying to implement) Brexit, which Scotland voted against and that would devastate Scotland’s key industrial sectors. According to the Fraser of Allander Institute,it would slash our exports by up to 11%, reduce our Government revenues and cost as many as Scottish 80,000 jobs losses in the event of a No Deal Brexit.  However, even a softer Brexit with a customs union but no single market access would still see tens of thousands of job loses and significant export falls.

When it comes to exporting Scotland has many vital advantages and significant untapped potential. However, being part of the UK, having its ports closed resulting in goods forced to travel further to be exported and the dangers of Brexit mean that Scottish exports and the Scottish economy are far more likely to thrive with the bespoke policies and attention they would receive in an independent Scotland.

You may also like:Scots exports would be worth almost £100bn after independence