The Resolution Foundation (RF) recently released a report concerning the economic history of employment, income and inequality in the UK. The report brings attention to the UK’s economic and political landscape since 1964, and predicts how it may look in the next five years with a Conservative and Unionist Government.

‘Having looked at the past, present and possible future of British living standards, there is certainly cause for concern.’ – The Resolution Foundation.

Research conducted by several organisations including the RF, the Institute for Fiscal Studies (IFS) and reports by POST (Parliamentary Office of Science and Technology), the UK’s Parliament in-house research and advice team, highlight that the UK will see a significant decline in living standards, and an increase in inequality within society. This basically means that what growth there is will disproportionately benefit the wealthiest in society, leading to economic exclusion.

‘Projections of future economic inequality suggest that although the rate of employment (the main source of income for most people) is expected to increase till 2020, income inequality is likely to increase as well.’

‘This is partly because projected real earnings growth will mainly benefit middle and higher-income households, while the proposed cut in the maximum benefits cap to £23,000 per year contained in the Full Employment and Welfare Benefits Bill would primarily hit lower-income households.’

Employment in the UK

Recently an increase in employment coupled with a decrease in inflation has seen household income growth expand in the UK.  For example, between 2014-15 the median real household disposable income in the UK grew by 3.4% – the largest increase since the early 2000s.  However, this pay growth was primarily triggered by a fall in oil price, which reduced costs of production for industry, rather than a rise in production. This resulted in a ‘mini-boom’ in wages but the RF forecasts that income growth will slow down. By the end of 2016 wages fell to such an extent that the average real pay was lower than 11 years earlier. 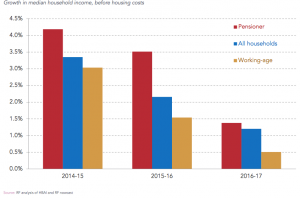 According to the IFS, the median income will grow by 1.5% between 2015-16 to 2020-21, this is relatively low considering that income grew by an average 1.9% per year between 1961 to 2013-14. Figure 2 demonstrates the weak income growth in the past 15 years.  Income growth of 1.5% will also lead to a worsening of household buying power if, as The Joseph Roundtree Foundation predicts, there is a 10% rise in the cost of living within three years, pushing 4 million UK citizens into poverty.

Figure 2: Income growth has bean weak in the past 15 years 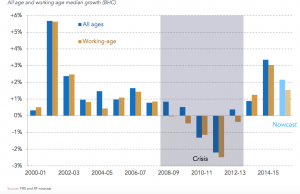 A low income growth will in turn trigger a rise in inequality, according to the IFS.

Since 1961, the share of income generated by the top 1% of households in the UK has steadily been elevated, highlighted in the RF report. As a result, before the financial crisis this group accounted for 10% of the UK population’s disposable income. This figure has declined slightly since then, nevertheless it still remains higher than seen in previous decades (see Figure 3).

Figure 3: The share of income going to the richest households in the UK has doubled since 1961 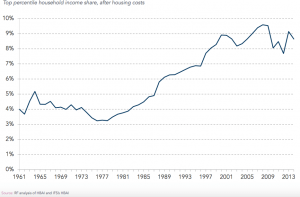 Presenting an analysis from a different angle, the IFS predicts that the top 10% wealthiest households in the UK will see a 11.8% cumulative rise in their income in terms, while the bottom 10% of the distribution’s real income will remain unchanged between 2015-16 to 2020-21.

Both analyses come to the conclusion that the wealthier percentage of the UK population will see a rise in income, whilst the less wealthy will not.

Figure 4: A rise in income for the top-half distribution in society 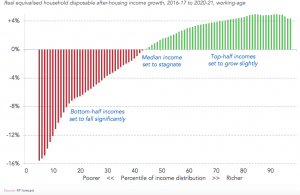 Rising inequalities in the UK will have significant impacts on families and children. Research by the IFS suggests that the poverty rate for large families will increase from 19.4% to 31.6% in 2020-21.

The vote to leave the EU caused the trade-weighted value of Sterling to fall by 15-20%, compared to the same time last year. This has triggered an increase in import costs such as the price of food, causing further strain on the poorest in society. The Financial Times wrote last week; ‘higher prices are starting to eat into household spending power’ as a result of the elevated retail prices. Deutsche Bank are predicting a further 16 per cent fall post-Brexit negotiations for Sterling, driving the pound down to parity with the Euro, and almost parity with the dollar.

Figure 5: A decrease in income growth and an increase in inequality to be expected in 2015-2020 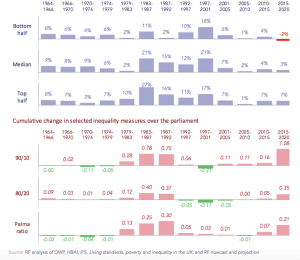 The current Government are steering the UK towards becoming a more unjust society by decreasing benefits and creating policies that are set to primarily benefit top earners.

“The 2015-20 parliament could be the worst for income growth for the poorest half of the households since comparable records began, and the worst since Margaret Thatcher for inequality” – The Resolution Foundation.

With hope for change, the RF suggests implementing policies in the UK that promote social equality. Their point being that this may be difficult under the Conservative and Unionist Westminster majority.

Business for Scotland believes that an independent Scotland would have the powers to address these rising levels of inequality. Major powers reserved to the UK Government such as equal opportunities, foreign policy, economic and monetary policy (including currency and interest rates), social security and trade and industry all affect Scottish income, equality and living standards, all, often negatively, impact on the economic and political landscape of Scotland.

Independence offers a chance for a better Scotland, as the current socio-economic damage done to Scotland will not improve under a Conservative and Unionist Government in Westminster.

Additional Reading: For our plans as to how Scotland can change economic direction with the powers of independence see here Elevating economics tells a better independence story than post-Brexit Britain