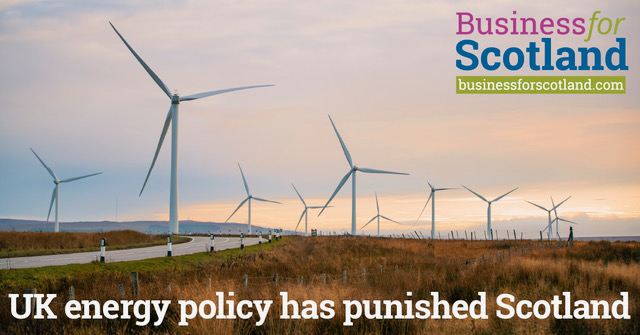 Today the energy regulator Ofgem has raised the energy price cap, a move that will see the average household energy bill increase to £3,549 in October – a rise of 80% on the current cap of £1,971 – this is on top of a rise of 54% earlier in the year.

In other words, energy bills will have more than doubled in a year and this devastating blow will cast millions into fuel poverty and probably cost lives as older folk, in particular, won’t be able to adequately heat their homes this winter.

Scotland has huge potential to produce renewable electricity. At the moment, that is constrained by the UK’s energy policy, and also by the outdated, privatised National Grid which has lacked proper investment for years. Last month, National Grid finally laid out plans for the biggest investment in the grid since the 1950s.

This £54 billion injection (for the whole of the UK), though welcome, comes after decades when the grid has been neglected and left unfit for the needs of the 21st century. It is welcome largely because it will mean that some of the offshore wind proposals which were given the go-ahead in the recent ScotWind auction can connect to the grid within the next decade.

But it won’t by itself change the prices the people of Scotland pay for power, which are higher than most of England. And it won’t enable Scotland to fulfill its energy potential in many ways.

Meanwhile, National Grid chief executive John Pettigrew has come under fire for receiving £6.5mn in total pay and bonuses for 2021/22. The company also raised the dividend it pays shareholders to higher than last year, and above the market average. The new investment will be paid for from consumers’ bills and from the savings the UK will make by importing more, very cheap Scottish power.

Why is the price of electricity linked to gas?

Each time you start by filling the bucket with the cheapest fluid, bottled water perhaps or supermarket-brand fizzy drinks. Then you turn to the pricier drinks – wine, craft ale, non-alcoholic gin. But for the last third of the bucket, most of the time, the only liquid available is single malt whisky. That is going to push up the price of the whole bucketful.

That is the system that is used in pricing electricity – it is set by the most expensive ingredient in the mix, which is electricity produced by burning gas. In the UK as a whole, gas is responsible for about 38% of electricity generation. So when the price of gas goes up, so does the price we all pay for electricity.  The cheapest ingredient is Scottish renewable energy.

What is the alternative?

The UK operates as one zone currently – therefore it is priced as one bucket across the three nations of the mainland UK. (Northern Ireland is part of a single electricity market with the Republic of Ireland.)

People across the UK pay the same basic price for electricity. (That punishes Scots, particularly in rural areas. Electricity is priced higher than gas and much of rural Scotland doesn’t have access to gas. Scots are also charged higher standing charges. Scotland is also colder and has increased requirements for heating.)

Environmental campaigner Alastair McIntosh, author of Soil and Soul, recently commented: “The latest Scottish offshore wind energy price: 3.7 pence/kWh unit. Melt that into the political equation when your bill charges 28p (pence/kWh unit) or whatever it’s going to be when the cold sets in again. And remember, energy policy is devolved to Westminster. This is outwith Scotland’s control.”

An independent Scotland could move to nodal pricing

An independent Scotland could operate as a zone, setting a price for electricity across Scotland, while still exporting to the rest of the UK through hubs, charging a higher price. That could tip the market balance towards more renewable production north of the border.

Under the current UK pricing model, it is much more profitable to import gas than it would be to build a wind farm in Sutherland.  The way the market is currently regulated drives energy production into high-population areas – which creates the wrong market signals if you want to increase renewable production.

Using the nodal system would make it more profitable for renewable providers to produce energy in a low-population, high-potential area like the north of Scotland – because when selling into a high-demand area like the south of England for example they could charge more, which offsets the greater cost of production.

Charging a higher price would actually eventually make the overall bucket cheaper for the south of England because it would drive a faster transition into renewables –  lucrative contracts for gas importers have contributed to the current dependence on gas.

Operating as a Scottish node would be possible while still being connected to the UK’s grid. Some countries such as Italy and the USA already use nodal pricing within their own borders. There would be hubs for transmitting electricity from Scotland to the UK or into Europe.

Scotland could use energy decision-making power to speed the transition

Having the extra levers of independence would mean that

Scotland is home to some of the most innovative and cost-effective tidal power in the world – yet the UK Government effectively makes it compete for scarce funding against other more established forms of renewable energy. The Scottish Government could take a different approach.

An independent Scotland will need to store renewable power for those infrequent times when the wind isn’t blowing somewhere. The Scottish government has already tried to encourage more pumped hydro storage. All it has been able to do is to grant planning permission – but the market needs contracts for difference – a guaranteed floor and ceiling price for the electricity it produces in order to invest and that has not been forthcoming from the UK.

A Scottish node would make it easier to send specific demand signals to Scottish consumers and businesses to adapt their consumption – dropping the price at certain times where energy is plentiful and reducing demand at peak moments. It is easier to even out the bucket size when you are dealing with a smaller population.

It could encourage more onshore wind, which is cheaper and faster to build than offshore. The Northern Isles has huge capacity to produce more wind – but even existing wind farms are regularly forced to turn off the power or face fines. The new grid investment plan doesn’t even mention the Northern Isles.

At the moment, the UK’s power supply is managed in a way that suits the needs of the south of England. That is where the UK Dept of Business, Energy and Industrial Strategy is based; Ofgem, National Grid and all of the decision-makers in the UK’s energy strategy.

They have presided over a situation where producing renewable energy and smart storage in Scotland is effectively disincentivised: it’s expensive to connect to the grid; there are delays; permission may be refused. UK decision-makers have chosen instead to pour billions into nuclear energy plants, even though they are much more expensive than renewables and have high decommissioning costs. They have also sunk more billions into importing gas.

The new grid investment proposal is aimed at enabling the UK to bring in more cheap energy from Scotland. It is welcome but it is not enough to solve the problems of planning for a bright energy future for Scotland. It is not focused on supporting Scotland to make the most of its huge energy potential, or ensuring Scotland’s people benefit from shared resources. With independence, Scotland could do a much better job.