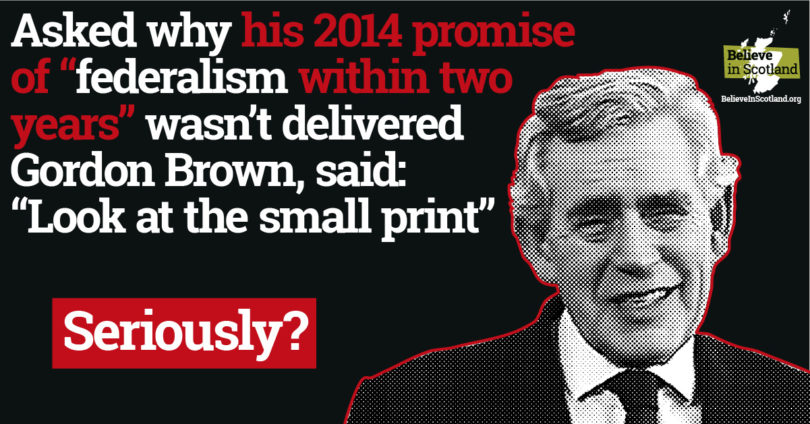 ONCE upon a time – and long before he ascended to the dizzying heights of Downing Street – Gordon Brown was my MP, and quite a good one at that. We knew each other professionally for a number of years at a time when Labour was in opposition and he was a frequent visitor to the BBC Radio Scotland studios in Edinburgh, where I was then based.

Until then I had always described my political stance as “traditional Labour with nationalist tendencies” although I did not belong to any party. In the run-up to 2014, I was one of the many covering the politics surrounding the indyref for broadcast outlets at home and abroad and found myself thoroughly disgusted with Project Fear and leading figures such as Brown sharing a public platform with the Tories and Liberal Democrats, while they all sang from the same hymn sheet, the psalm of Project Fear.

Fast-forward to the present day – Willie Rennie is no longer the LibDems’ Scottish leader, Baroness Ruth Davidson doesn’t lead the Scottish Tories and Brown, the former chancellor and prime minister is yesterday’s man, who was tabled by the unionist The Spectator as doing more to deliver Scottish independence than the SNP.

There is no doubt that he is not an unintelligent person, so why is the man who was one of the architects of devolution so vehemently opposed to its natural progression to independence?

He is said to be planning another “devo-max” option in the event of indyref2, to give Scotland full economic independence, while still being subject to Westminster rule – fools us once…

However, with the massive rises in fuel and food prices and the soaring cost of living overall, most of them a by-product of Brexit now added to Russia’s invasion of Ukraine, Brown would do well to recall the litany of broken promises the No camp made in 2014 following the infamous “Vow”.

The most obvious broken promise that sticks in people’s craw is the claim that the only way to protect Scotland’s future in Europe was to vote No. Well, we know how that turned out – Scotland being dragged out of the EU despite 62 per cent of our population voting to remain.

Renewables, and the potential for Scotland to be a green energy hub because of the broad shoulders of the UK was another myth. The truth is we lost out on billions of pounds from a subsidy scheme for new onshore wind farms, as many energy firms delayed renewables projects in a post-Brexit UK.

A vital part of renewables development is carbon capture and storage (CCS), where a suite of technologies is used to prevent carbon dioxide (CO2) emissions entering the atmosphere.

In Scotland this is epitomised by the Acorn CCS project at St Fergus gas terminal, where existing gas pipelines can take the CO2 to a North Sea storage site in the Goldeneye field and was the subject of another 2014 pledge.

This should have been a no-brainer, but the UK government’s Energy and Climate Change Minister Greg Hands said last October the first CCS facility would be built on the Humber and around Liverpool, with the Scottish cluster “in reserve” in case a back-up was needed.

With oil prices fuelling the cost-of-living crisis, the Scottish Greens have signalled their enthusiasm for a windfall tax on the eye-watering and obscene profits oil and gas companies are making as Brent crude sits at around $110 a barrel at time of writing.

Such a tax would be included in the UK Government Expenditure and Revenue Scotland report (GERS), destroying the “false deficit” argument, basically an accounting “trick” that makes Scotland look worse off than it really is – so the UK government would rather not tax its friends in the oil and gas multinationals.

Gordon Brown also turned his attention to the Scottish National Investment Bank, set up by the Scottish Government, and said the UK government should become a partner in it – something Business for Scotland previously lobbied for.

Brown said the bank could be scaled up if Westminster became a partner and could increase annual funding to £1 billion, helping to counter rising costs and spur on the economy: “We should invite the UK Government to be an equal partner in the Scottish National Investment Bank, using all the resources of Britain to make Scotland an export superpower in renewables, life sciences, digital and manufacturing.”

However, Brown must know Labour and the Tories won’t work together on indyref2. He is out of power and out of touch with reality, with nothing he can promise having the remotest likelihood of being delivered by Westminster.  The Conservatives are in power and will categorically not invest in Scotland’s economy lest it makes more people believe in Scotland.

Brown’s years of ridiculous pontification on Scotland’s future without much response from the SNP, thankfully, seems to have ended. Brown made the nonsensical accusation in a recent Daily Record article that the SNP were partially responsible for the cost of living crises. Kate Forbes, the Scottish Government’s Cabinet Secretary for Finance and the Economy described those accusations as a “shoddy mishmash of false equivalencies, political misdirection and blatant mendacity”.

Brown seems to think the Union is the answer for everything when actually it’s the cause of almost everything that’s holding Scotland back. A one-trick pony now, Brown will be exalted by the unionist media for his indyref2 omni-interventions but they will fall flat with the people of Scotland whose ambition for Scotland seems to have simply outgrown Brown’s and the Labour party’s.