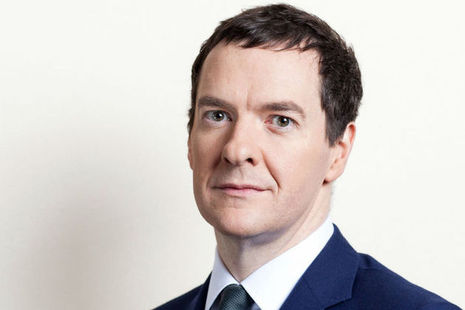 OF all the feeble plans to stop a second referendum on Scottish independence and deny the democratic will of the Scottish people  – and there have been a bewildering and infuriating variety – none has been as vacuous and insulting as that put forward by the former UK Chancellor George Osborne in his column in London’s Evening Standard this week.

The crux of Mr Osborne’s article can be boiled down to one simple – indeed simple-minded – sentence: all the arguments against independence have now been defeated and therefore Boris Johnson should block it by simply refusing to sanction the referendum going ahead.

In the process of explaining that plan the former chancellor makes a number of points which suggest he wasn’t paying attention in the run up to the first referendum in 2014 and he hasn’t turned his mind to the issue since.

Mr Osborne, now serving as the Standard’s editor in chief, makes two huge mistakes in his first paragraph. First he suggests ‘’our referendum’’ (by which presumably means the campaign run by then Prime Minister David Cameron and himself) was ‘’a proactive plan to keep the United Kingdom  together’’. Now when the referendum was set and the respective campaigns kicked off I was editor of the Sunday Herald. If there was one word which could never be used to describe the pro-union side in those early days it was pro-active.

They were determined to engage as little as possible with any discussion on independence, seeming to believe if they stuck their fingers deep enough in their ears the whole issue would simply disappear.

In those days the Sunday Herald had not yet come out in support of independence – that would not happen until May 2014, before the vote took place in September that year – but the newspaper was definitely on a journey to Yes.

We wanted to encourage as wide a debate as possible so we were keen to devote significant space to the Yes and No arguments and to hold public events with different speakers.

It became a regular Better Together technique to agree to either provide articles for the newspaper or speakers for the events and then pull out at short notice in the hope that we could not provide balanced arguments in the time allowed before deadline and would then pull the article or the event.

I particularly remember setting aside two pages for pieces by then First Minister Alex Salmond and David Cameron. The pages had each been designed to be the mirror image of the other, allowing exactly the same space for each of the articles. Alex Salmond provided a reasoned, well-argued piece of around 900 words, which fitted the space more or less perfectly.

David Cameron provided just 130 words. Just to make sure he was aware of what we needed we contacted his office to explain the concept and that as things stood we had a full article balanced by little more than a couple of paragraphs. Mr Cameron’s office said he would not be providing any more words.

To redesign the pages would give the impression we had purposely favoured the Yes side over Better Together … so we stuck by the idea of allotting them the same space and simply left the empty space before the Prime Minister’s words. It was a pretty stark visual portrayal of how little the pr0-unionist side cared. 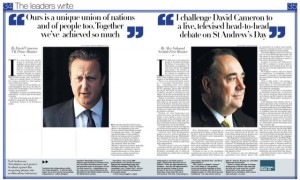 Indeed, throughout the months leading up to the campaign we waited in vain for Better Together’s positive argument in favour of the union. After all, if they were fighting hard to keep the UK together they must have good reasons. We offered to give them two pages to put forward the positive case and Better Together chairman Alistair Darling agreed to write the article.

On the Friday before publication a police helicopter crashed into Glasgow’s Clutha Bar killing 10 people and injuring 31. Mr Darling felt it inappropriate to engage in political argument that weekend – which he was perfectly entitled to feel – but didn’t take up my offer of publishing the article the following week, or any other week for that matter.

Mr Osborne’s second mistake was to claim that after the referendum result ‘’it looked like it had put Scottish nationalism back in its box for a generation’’. In fact, any despondency among the Yes movement at the referendum result barely lasted a couple of weeks. There was a very quick recovery which saw a historic SNP victory in the 2015 UK general election, when it won 56 of the 59 Scottish seats at Westminster. Far from going ‘’back in or box’’ we continued to make the case for independence as the best future for our country. 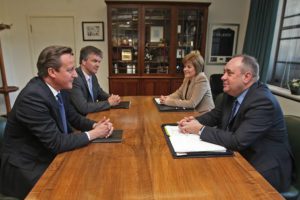 Prime Minister David Cameron and First Minister Alex Salmond sign the Edinburgh Agreement, which paved the way for the 2014 referendum

There are plenty more such errors and misunderstandings in Mr Osborne’s article. But it is not the number of mistakes which really offends … it is the mindset it represents. In George Osborne’s world devolution was a gift of Westminster that you suspect he believes can be taken away more easily than it was  given. He suggests that the Tories’ move in the aftermath of the referendum vote to open a UK Treasury office in Edinburgh and badging UK projects with a ‘’little union jack’’ was a genuine attempt to make a positive case for the union when in reality it was nothing more than a  cynical attempt to show off the faked ”generosity” of our overlords.

In any case, he says, all it succeeded in doing  was to hold the SNP to ‘’account for the devolved decisions on things like tax we handed over to them’’.

George Osborn does not understand why we are not grateful for this annexation of a nation’s culture. He sees the effect of a Yes vote entirely in terms of its diminution of the United Kingdom

In George Osborne’s world Scotland’s history is ‘’our history’’, its contribution to literature and philosophy is ‘’our contribution’’. He does not understand why we are not grateful for this annexation of a nation’s culture. He sees the effect of a Yes vote entirely in terms of its diminution of the United Kingdom – ‘’The rest of the world would instantly see that we were no longer a front-rank power, or even in the second row’’ – and finds no room in his article for any mention of the benefits it might bring to Scotland, or why so many of us so desperately want it.

It does not seem to occur to Mr Osborne that the Westminster parliament has any responsibility to respond to the democratically expressed will of the Scottish people, who will almost certainly vote overwhelmingly for pro-independence parties at the next Scottish parliament elections.

The election is not even an annoyance to Mr Osborne … it simply does not matter. It does not matter why we want independence or how many of us will vote for it. All that matters is that Boris Johnson avoids the ‘’ignoble’’ title of the worst ever Prime Minister. And if he has the power to avoid that fate by simply refusing to allow the referendum to be held why let a trifling principle like democracy stop him?

George Osborne’s vapid, frankly objectionable column tells us everything we need to know about why we need to take our independence … and  guarantees that we will be successful in that quest.