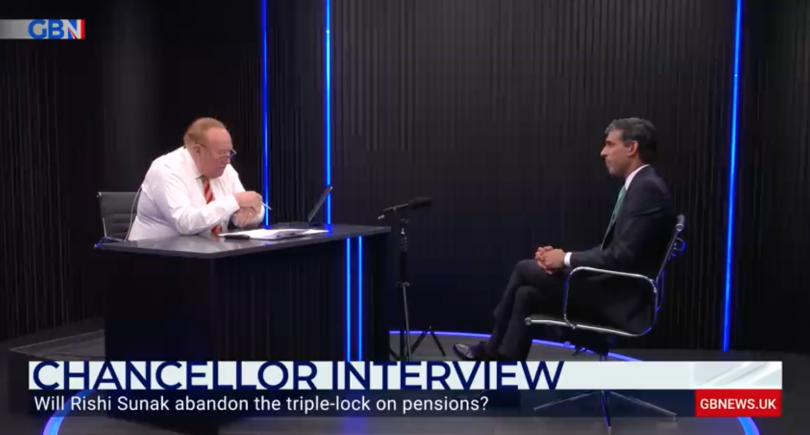 As a young man I was fascinated by film. I remember discussing one film, Empire; by Andy Warhol, at the film club. Empire was shot in the 60s, it’s a silent black and white film showing hours of unchanging footage of the Empire State building in slow motion. It has no characters, no narrative nor subtitles, it’s just eight hours of nothing happening. Some say its genius is that it reduces the act of watching a movie down to the lowest common denominator, the simple passing of time. I argued that it was so boring that it reduces watching a movie to the simple act of wasting time.

I am told that at one point a seagull can be seen flying through the picture in slow motion, but I cannot attest to that being true as I have never been interested enough to watch it for more than a few minutes without getting bored out of my skull.

Why am I writing about a 1960s arthouse movie? Well over the last week I have (mostly out of morbid curiosity) switched on the newly launched GB News and been reminded of the Empire experience of pointlessness, wasted time and an absolute lack of entertainment and once again I couldn’t bring myself to watch it for long enough to see if anything as interesting as a slow-motion seagull was coming.

I tuned in expecting to be angry with this new, right wing conspiracy theorist, British nationalist, ultra conservative, British exceptionalism-inspired fake news channel. In the end, I almost felt sorry for the people involved. A tortuous menu of commentators with no facts to back up their childlike arguments and assertions, no real reporting and a strangely dark box-like studio for Andrew Neil that looked as if someone had soundproofed their garage and painted it black and blue.

Second rate pundits were chosen for their ability to agree with the GB News bias but were allowed to drone on too long without challenge, presumably as there was nothing better in the next segment and every presenter, including Andrew Neil, seemed to be sporting a look that masked a shared realisation you might describe as “I thought it would be better than this”.

Neil Oliver, the BBC’s former head of Anglifying Scottish History, was cringingly introduced by Andrew Neil as the King of Scotland. On the screen, however, it stated that he was joining them from Sterling, which apparently is a town in Scotland – good grief.

Technical difficulties were everywhere; it seems GB News spent all the money on presenters and forgot they would need some technicians or indeed anyone who knew how to make a TV programme. Strangely dark and unappealing sets, muffled sound from almost every contributor, typos on the scrolling news and headings, this is amateur-hour stuff but you couldn’t watch it for an hour without anti-nausea medication.

In an attempt to be cutting edge GB News has given a platform to pundits that are known to be unhinged, social media troll types because, well, that’s got to at least be entertaining right? One guy tried to make himself look more interesting by smoking while being interviewed (is that even allowed?). Lord Sugar was set up many times with leading questions where he could have waded into controversy, but each time seemed to miss the point of the question. When asked if he would ‘take the knee’ instead of expressing the standard rent-a-rant view that it has gone on too long, that the movement had been hijacked, that old chestnut about ‘all lives matter’…  he meandered on about his own knee problems and how difficult it would be to get back up, sounding more like your old grandad who keeps referring to you by your dad’s name but in a tv studio.

Former Sun editor and Daily Mail Anti-Woke columnist Dan Wootton seemed overconfident, as if he was dispensing the truth like the oracle of Delphi, that the programme was going extremely well and that his stream of consciousness – a fact free, conspiracy theory laden diatribe – would change the world. However, it looked to me more like he was the weekly winner of the ‘who got the longest ban from Facebook this month for breaking community rules’ competition winner.

It was on one of Wootton’s sections (‘Uncanceled’, where people with fruitcake views can speak unchallenged without regard for facts or intelligence) that it went full blown Scotiaphobic. On Wednesday Wootton interviewed author Lionel Shriver about a Spectator article she wrote saying that England should allow Scotland to be independent because it would be “simply delicious” to see karma kick in and Scotland would fall apart. She spouted all the old unionist scaremongering lies on currency, deficit etc., and said the “mean side” of her would like to see Scotland fail. She came across as an American version of Katie Hopkins but without the personality.

So I looked her up and the New Yorker described her: “Shriver is relentlessly contrarian, not only in her political positions—she is a pro-Brexit, anti-woke, #MeToo-skeptical Democrat—but in most aspects of life. She eats only one meal a day: dinner, usually around midnight, often featuring “burn your face off” quantities of chilli pepper. She dislikes babies.” Frankly what more do you need to know about her to know she is not worth listening to?

Advertisers have been abandoning the channel in droves, most blaming their agencies for booking the station without telling them in the first place. The money for GB News reportedly comes from Brexit supporting (and profiteering) hedge fund managers and the American right, so amateur as it is, GB News is still a dangerous assault on truth in the news and I see a run-in with the regulatory authorities as inevitable. It may survive but should come with a health warning that watching it for too long will suck all the joy out of your life and leave you depleted, sad, alone and bitter at everyone that is not as convinced of British exceptionalism as you are.

As GB News launched all the presenters and pundits were asked to say three words that described GB News; they all responded with well-rehearsed sycophantic, narcissistic verbal triptychs. I’ve seen enough of the station this week to be able to join and my three words are boring, amateur and Scotiaphobic.