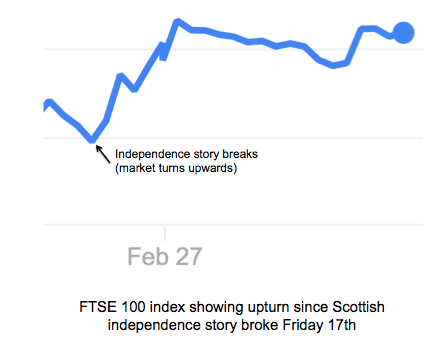 Following the news on Friday that Theresa May is preparing for The Scottish Government to demand a second independence referendum after Article 50 is triggered in March, the FTSE 100 index rose 28 points or 0.4%. This boost to the FTSE index was helped by a weaker pound as FTSE 100 members gain around three-quarters of their earnings from overseas markets.

Many newspapers and online media linked the 0.3% fall in the value of Sterling against the dollar to a report in The Times claiming the UK government was preparing for Scottish First Minister Nicola Sturgeon’s demand for a new independence referendum. As is clearly demonstrated by the rise in FTSE 100 stocks, a weaker pound has upsides and in the long run a weaker pound helps exports as other countries can buy more British goods for the same money.

Not fully understanding either that a falling pound may have long term upsides (more jobs and exports) as well as a down side (inflation), some in the media have stated that fears over Scottish independence had crashed its value.  This however, is not really backed up by the facts – yesterday’s fall of 0.3% may or may not have had any link to the Scottish referendum news, its hard to tell as 0.3% is well within the normal variance of Sterling since the Brexit vote. 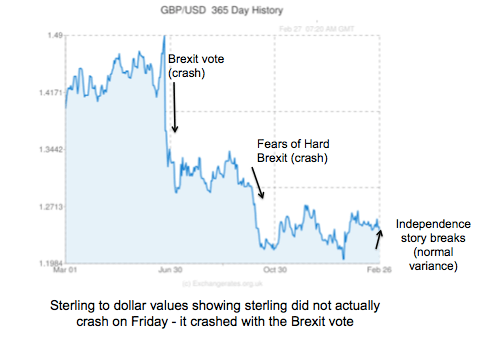 Sterling has however fallen 16% since the UK voted to leave the EU, and Deutsche Bank are predicting a further 16 per cent fall post-Brexit negotiations for Sterling, driving the pound down to parity with the Euro, and almost parity with the dollar.  Now that is an actual crash and should lead to around 10% inflation in prices by 2020.

If the announcement of another Scottish independence referendum does lower the pound then it could arguably be beneficial to Scottish business overall, by boosting our exports. The market would fear Scotland’s oil and positive balance of trade leaving the pound, and indicate the strength of the Scottish economy.