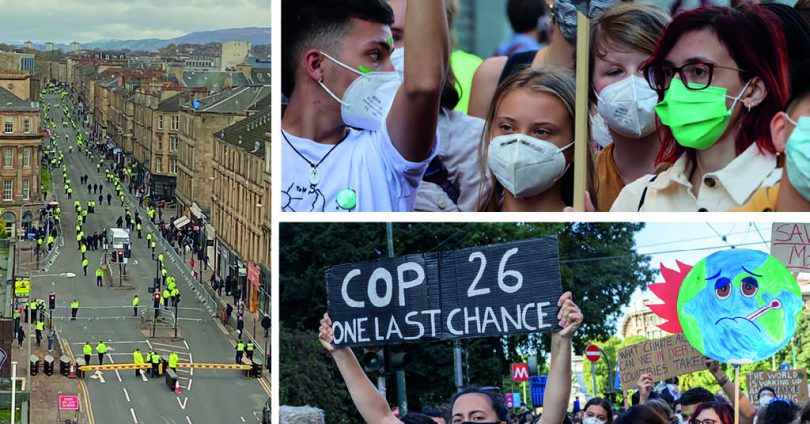 You might think that with the fate of the world hanging in the balance the big issues at the COP 26 climate change conference in Glasgow would revolve around whether the world leaders finally, finally get off their bottoms and do something useful … but you’d be wrong.

The big problem exercising the minds of Scottish opposition politicians is not zero emission targets, nor the transition from fossil fuels to renewables. No, they are in a lather about adverts which have the temerity to talk up the country when the world’s eyes are upon it.

The ad, placed in newspapers by the SNP, carries a main headline stating: ‘’A nation in waiting welcomes the nations of the world’’ … a quote from First Minister Nicola Sturgeon. In smaller type it mentions Scotland’s role in helping lead the world into the industrial age and its pride in doing the same into the net zero age. It adds: ‘’While not yet an independent nation, we’re more than ready and able to play our part on the global stage at COP 26’’.

Nothing in the advert is factually incorrect. It’s hardly controversial.  It is no big surprise to anyone that there are those who look forward to the day that Scotland becomes an independent nation. If any international delegate is unaware of the independence debate taking place in the country where COP 26 is taking place it’s hardly a sin to bring them up to speed.

For some reason the ads have sparked outrage from opposition politicians lambasting their ‘’divisiveness’’ and ‘’obsession’’ with independence. Some have even demanded it be removed.

The COP 26 conference itself is hardly divorced from the constitutional issue in Scotland. Although it’s being held in Glasgow the UK is officially the host country. Prime Minister Boris Johnson is representing the UK at the event and it is no secret that he has been doing his damnedest to make sure Nicola Sturgeon has no official role. Has there been an outcry in most of the Scottish press about that? No prizes for the correct answer.

The UK government wants Scotland’s role in the whole event to be reduced to acting as an impressive backdrop for the world leaders to drive through. It’s massively disruptive and city residents have seen roads close and massive traffic problems, not just caused by the American president’s penchant for massive motorcades. All this, of course, will be worth it if – and it’s still a big, big if – COP 26 paves the way for real action as time runs out in the battle to prevent global warming destroying the planet.

In the meantime Scotland’s and in particular Glasgow’s hospitality surely deserves to be rewarded with a higher global profile for our culture, our pioneering role in renewables and, yes, our politics.

None of that is going to seriously deflect the world’s attention from the big issues of the conference. It’s only the Scottish media and Scottish pro-Union politicians who are infuriated by anything that dares to even acknowledge an issue which has the support of at least half of the Scottish voting population.

Of course the ‘ban’ on all talk about independence doesn’t extend to the Scottish media itself, or indeed pro-Union politicians

There’s no issue here around the spending of public money. The ads were paid for by the SNP and not the Scottish government. The political ‘’outcry’’ is nothing to do with any principle … it has been provoked by pro-Union politicians terrified of any real debate about Scotland’s future.

Of course that ‘ban’ on all talk about independence doesn’t extend to the Scottish media itself, or indeed pro-Union politicians.  Yesterday’s Daily Express published an opinion piece by Conservative MSP Russell Findlay entitled ‘’Know your Nats: a handy guide to Scotland’s noisiest minority’’. There you will find advice for COP guests on ridiculous mythical stereotypes such as The Unicorns (‘’dreamers who believe in a Scottish socialist utopia’’) and The Angry Men (‘’a lifelong political fury was forged after being beaten up by some English soldiers during national service in Aldershot in the 1950s’’).

All this is deemed acceptable because the Union side hasn’t taken ads in Scotland’s daily newspapers. But then … it doesn’t need to.