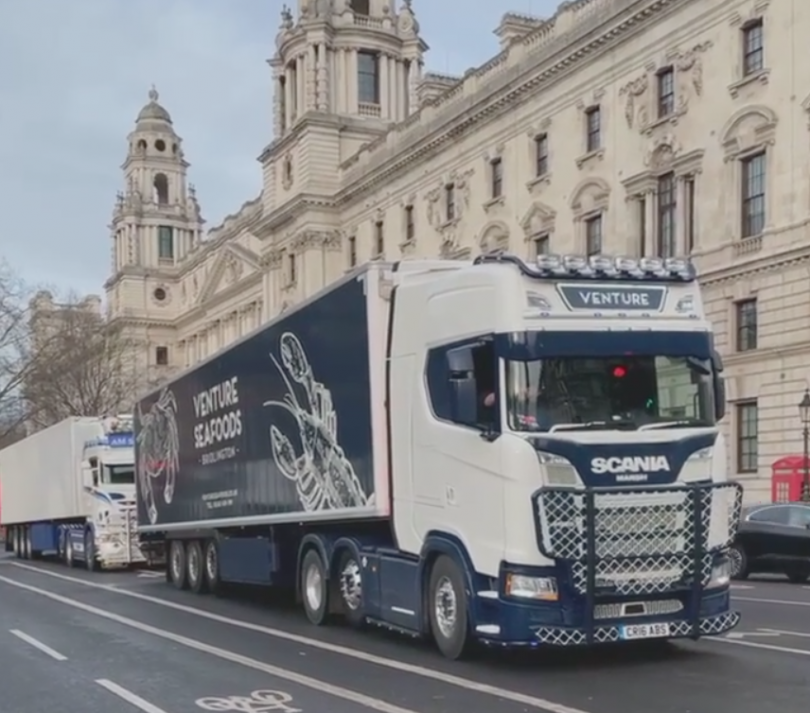 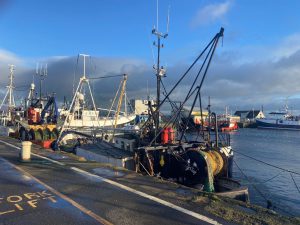 UP to 20 lorries representing mainly Scottish fishing export firms drove up Whitehall in Central London this morning to protest at the Brexit disruption that is threatening the future of their industry.

The lorries –  one of which had the slogan ‘’incompetent government destroying shellfish industry’’ written on its side – were parked near Downing Street for more than an hour. Another bore the slogan ‘’Brexit carnage’’. Some reports suggest that fish suppliers plan to dump their catch outside number 10.

Fish exports have been severely disrupted since Boris Johnson’s much-derided Brexit deal with the EU came into force on January 1.

Businesses which reply on the freshness of their produce have watched it rot  while delays have stopped shellfish reaching their markets in time. Exporters blame red tape and complicated checks needed to get the shellfish into Europe.

Some fishermen have resorted to landing their catch in Denmark to avoid the ‘’bureaucratic system’’ that exports to Europe now entail.

We strongly feel the system could potentially collapse. Prime Minister Boris Johnson needs to be honest with us

Gary Hodgson, a director of Venture Seafoods, which exports live and processed crabs and lobsters to the EU, had trucks parked near Downing Street.

He told the news agency Reuters: ‘’We strongly feel the system could potentially collapse. Prime Minister Boris Johnson needs to be honest with us, with himself and with the British public about the problems for the industry.’’

Mr Raab said: “I’m not convinced that that is the result of the agreement. The agreement we have struck – short term, medium term and long term – will create huge, sustainable opportunities.

“Of course we have always said as we leave the transition period with a deal, but even more if we hadn’t found a deal, there will be some teething problems.