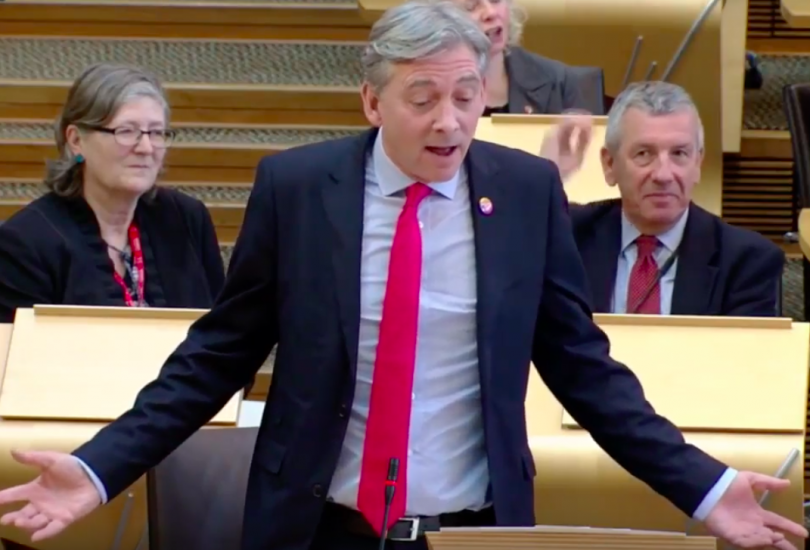 I was once a very serious young man (yes, even more so than now) and at university I was elected as class representative to the student council. I had a serious agenda and took the job very seriously. In my first year I managed to get some serious concessions: new services provided for students, better counselling for those having trouble adapting to student life, and limits on tutorial group sizes.

When I stood for election in year two I was beaten by a guy who offered free chips from the cafeteria for all students. I pointed out that was he was talking nonsense and he didn’t have the power to offer free chips, nor could he ever deliver on his promise, “but hey”, people said “free chips”. I was reminded of this long forgotten political lesson by the Labour Party this week talking about federalism.

Richard Leonard of Scottish Labour told the Sunday Herald that he wants Jeremy Corbyn to “get a move on” with plans for a federal Britain as a radical alternative to independence. First of all, it’s a little embarrassing that Leonard hasn’t realised yet that Corbyn isn’t interested in proper federalism or, for that matter, in Scotland.

There are several reasons for this. Amongst them is that Scotland can’t gain federalism unless England gives it to us, and for that mater, to the rest of the UK at the same time. Scotland could have said “goodbye we are leaving this uneven Union” via the 2014 referendum and the UK would have had to agreed to that.

However, if Scotland were to vote for federalism, that would be us forcing a new style of government on the UK and it wouldn’t work. It would be akin to a Scotland-only referendum saying that we should abolish the Lords, detach the royal family from public life and have an elected head of state, or that the UK Parliament should move to the Isle of Arran. We simply don’t have the power to force such dramatic decisions on them. Federalism must be voted on in a full UK-wide referendum (according to a House of Lords report) and there just is not enough support in England, where most voters live.

So UK Labour would have to go into the next UK General Election promising a very expensive referendum on a policy that is a dead cert to be a vote loser in England. It’s not going to happen – Leonard will never have the power to offer that, nor could he ever deliver on his promise. It’s “free chips” campaigning.

Many independence supporters are worried that federalism will be a dangerous offer in a future referendum, but frankly that’s also mince. Let’s gloss over the fact that you can’t federalise power to regional governments in the face of post-Brexit international trade deals.

Hence why the UK Government is trying to grab powers from the regions for seven years. Let’s also ignore the wise old Napoleonic advice of “never interrupting an opponent when they are busy making a mistake”. Federalism isn’t an answer to independence, even arguing for it is a stepping stone to independence.

Labour’s very rough, almost childlike estimation is that a third of Scottish voters will vote for the Union at any cost, a third are worth fighting over as they may change their minds, and a third will vote for independence and are immune to scaremongering. Labour, caught between the SNP and the Tories, want to map out their own constitutional ground and so think they can get the middle third onside with federalism.

It would, however, be suicide for the Union. Think about it, if Labour want to get people to vote for federalism they would have to convince them that Westminster isn’t fit for purpose – that all the powers the Unionist parties have been arguing against Scotland having would now somehow be better under Scottish control. They would have to convince everyone who was worried about change to accept that major constitutional change is now needed and that in fact the UK isn’t OK, that devolution doesn’t go far enough. They would have to make the economic case that there would be more, better paid, better quality jobs and a stronger economy if Scotland and not Westminster had almost all the powers of Westminster under its control.

That’s making the case for independence, and I don’t disagree with any of it. So what arguments does that leave against independence?

Federalism has a thousand definitions and there are dozens of very different versions in existence around the world – some versions have less powers than the Scottish Government currently has. So what powers would federalism (near federalism, devolution Max, full home rule or any of the other monikers that politicians seem to think are interchangeable) deliver?

In my opinion, a three-way constitutional referendum in Scotland, independence would beat federalism and Unionism would become irrelevant. This is because, in general, a federal campaign would be left arguing for all the same powers as independence except for defence (illegal wars, plans to renew Trident), welfare, (bedroom tax) international relations (Brexit against Scotland’s wishes and xenophobic immigration policies such as the Windrush debacle), pensions (the lowest pension in the OECD and WASPI women pensions unfairness) and to most likely rewrite the constitution so that Scotland doesn’t have the democratic right to leave anymore (Catalonia).

Bring it on! The word debating champion couldn’t sell that case to 10 year olds in a primary school debate.

“Ah, but it will all be different when Corbyn is PM”, they will say (that’s what they said about Milliband). Corbyn isn’t going to be PM – he lost against May, the worst Tory candidate and campaign ever and against the backdrop of the most clueless Westminster government in history he is falling behind in the polls.

He doesn’t want federalism, it’s even more incompatible with Brexit than devolution, its not a serious suggestion. Chips anyone?