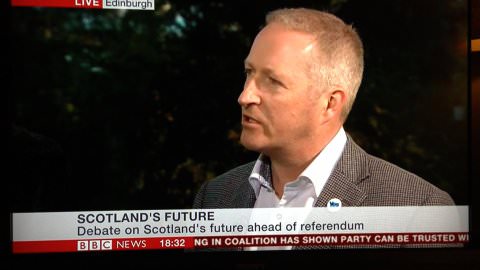 The Scottish people deserve the truth from the No Campaign but they are not getting it.

Business for Scotland has recently been the subject of increasing media coverage by way of articles in major news publications and appearances on leading television programs.  While our evidenced and content based approach to communicating our message on behalf of business has been well received, our representatives have faced a barrage of misinformation from No Campaigners.

Business for Scotland Chief Executive, Gordon MacIntyre-Kemp, explained that “Banks are not bailed out by the nation in which they are headquartered. They are bailed out by where the contagion from their failure hits.”

McFall went on to reply: “You ask Alistair Darling from where he got the call from Royal Bank of Scotland.”

This was the biggest bailout package for any UK based bank and came on top of a £6bn capital investment from Qatar. There are numerous other examples of such cross-border arrangements, including the packages put in place to bail-out RBS, which had a larger sum from the US Federal reserve that from the UK government.

An independent Scotland would not have had to bail out the Scottish headquartered banks on its own.  Either Lord John McFall is unaware of the international conventions governing international bank rescue or he was deliberately misleading viewers by suggesting a nation’s banking system is wholly dependent upon their domestic Central Banks and Finance Ministers. The facts prove otherwise and Lord McFall should be straight with viewers.

For a fair debate on Scottish independence the public deserve the truth from the No Campaign.  Negative unsubstantiated scare stories blurted out on live TV are not worthy of such an important democratic process. If the No Campaign continues to mislead we will call them out. Business for Scotland will continue to provide factual economic information and call others to account when they fall short of this standard.