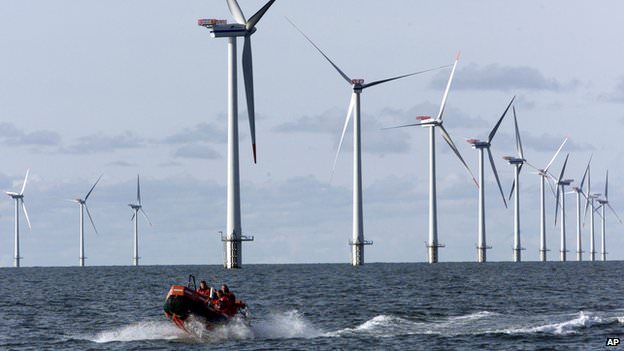 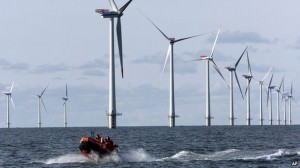 Every couple of weeks – or so it seems –  a UK cabinet minister makes a day-trip to Edinburgh to give a speech saying how dreadful Scotland’s future will be if it votes for independence. Accompanied by a repetitive, poorly argued and partisan 101 page document on Scotland’s Energy Future, DECC’s Ed Davey made the hour-long flight north a couple of weeks ago to predict that Scottish energy prices would soar.

The DECC contention is simple. Scotland uses about 10% of UK electricity but produces almost 40% of its renewable power. These renewables are subsidised to make them competitive with fossil fuel generation. If an independent Scotland continues with its plan to get 100% of its power from renewable sources in 2020, DECC asserts that Scottish people will have to pay for all the extra subsidies that will be required. These payments will no longer be shared across the whole UK. Davey’s figures suggested that householders in Scotland might have to pay as much as £189 more a year. As usual, the reality is much more complex. 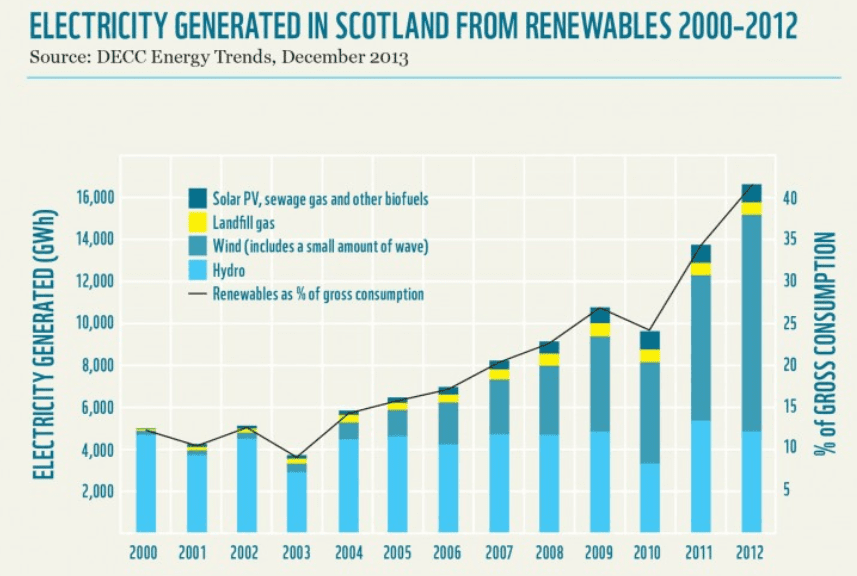 Without Scottish wind and hydro power, the remaining UK (R-UK) will generate only about 20% of its electricity from renewables in 2020, barely changed from today’s 16% for the UK as a whole. This means that without Scottish renewables, the UK will miss the binding EU 2020 target of 15% of all energy (not just electricity) coming from low-carbon, non-nuclear sources. To be more precise, the R-UK will hopelessly undershoot this figure. Perhaps this doesn’t matter – the country may not even be part of the EU by then.

Scottish renewables are a good investment

What may be more important to the R-UK is that Scottish renewables are cheap. DECC figures show that the 2020 subsidy for a megawatt hour of good Caledonian low carbon electricity will be about £43. For England, the cost will be over twice as much at £93. The reason is that Scottish power predominantly comes from onshore turbines and hydro, which receive relatively little subsidy while English renewable electricity is generated more expensively by offshore turbines and by PV on the roofs of well-heeled Southerners. If Scotland remains in the UK, the whole country can meet its decarbonisation targets far more cheaply than R-UK can on its own.

The rest of the UK needs Scotland’s energy imports

Another issue is scrupulously avoided by the DECC report: Scotland is a major source of the electricity for the rest of the UK. About 4% of the yearly power consumption of England and Wales is met by exports coming on pylons across the Scottish border. This figure is tending to rise as Scottish renewable power continues to grow faster than in England and as English nuclear plants are closed.  Although Ed Davey talked darkly of cutting Scotland off from the R-UK grid and finding alternatives supplies from more accommodating countries, we lowlanders are reliant on Scottish electricity, particularly at peak time.

Despite what Davey says, England cannot get the power from elsewhere. The links from France and the Netherlands already run hot with imported electricity and have very little surplus capacity. (As I write this, on a warm Monday Bank Holiday when power demand is unusually low, both interconnectors are bringing in electricity – effectively from German PV –  at 100% of their maximum.) Moreover, Scottish electricity tends to come south at times when demand, and therefore wholesale electricity prices, are high. As the R-UK piles into small-scale solar PV electricity, which arrives on the grid exactly when it is not needed, the need for Scottish wind power on dark December evenings becomes even clearer.

The evidence demonstrates that Scotland is in a strong energy position

(1)    Curiously, the DECC paper omits any mention of FITs for PV and wind in England and Wales. But smaller scale PV will be a major user of subsidy by 2020. (2)    Assumes 2020 demand is equal to 2012 figure. (3)    DECC says, without providing supporting justification, that Scotland has underestimated its electricity demand. But the numbers on page 53 of this document that other sources in DECC agree with the Holyrood figure. Table 2: 2020 subsidy cost per megawatt hour of renewable electricity

(Source:DECC) The DECC paper suggests that about two thirds of the increase in Scottish power bills will result from householders being obliged to take on the full cost of all renewables added to the grid after the date of independence. (Which is, of course, not the date of the referendum).

I have assumed that 2013/14 subsidy payments made to Scotland generators – often owned by non-Scottish companies – are about £1bn out of the UK total of about £3.2bn. By 2020, this subsidy is expected to rise to about £1.8bn (source: DECC) out of a UK total of £7.6 bn. So the incremental cost of Scottish renewables between the end of 2012 and 2020 is about £800 million a year and the cost per extra MWh of electricity is little more than £30. See Chart 1 below.

These calculations suffer from not using precise figures for 2014/2015 renewable generation in Scotland and England + Wales but I am sure they are directionally accurate. To summarise, they show that Scottish renewables are getting cheaper over time but the reverse is true in England and Wales as the R-UK switches to expensive offshore wind and small scale PV. The subsidy cost of all Scottish renewables in 2020, not just the farms installed after independence, will be about £44 a megawatt hour compared to £93 in England and Wales.

Chart 1: The full subsidy cost of renewables in 2020 and the incremental cost for new generation between 2012 and 2020.

Renewable subsidies are the most important reason why DECC says Scottish bills will rise. The other cost DECC identifies is the bill for improving the capacity of the interconnectors between Scotland and England. The intention is that this should rise from about 3.5 GW to around double this amount. This will be needed to help balance the grids of the two countries. But there is no clear argument in the DECC paper, or elsewhere, as to why Scotland, rather than England, should pay for this cost. Why should the seller, not the buyer, pay for the improvement?

Two final points. The DECC argument against Scottish independence has at its heart the assumption that Scotland will suffer financially from its ambition to be (net, over a 12 month year) 100% powered by renewables by 2020. The Department’s report wants Scottish voters to worry about the cost of this low-carbon power. But at the same time, DECC frequently asserts the importance of the whole UK’s efforts to decarbonise electricity by 2030. Without near 100% low carbon electricity by 2030, ministers rightly assert, the UK cannot hope to meet its ambitions to cut total emissions from energy (not just electricity) to close to zero by 2050.

In essence, the attack on Scotland is therefore unpleasantly hypocritical: Salmond and his government are pilloried for striving to achieve by 2020 what the UK as a whole plans to achieve by 2030, just a decade later.

Writing as someone who believes passionately in the need to get as much low carbon power, including nuclear, onto the grid as soon as possible, I’m acutely disturbed by government ministers warning other countries about their costly ambitions for renewables. As has happened so frequently in the last couple of years, skittish investors will have heard Davey’s speech and asked themselves if his statements presaged another turnaround on financial and legislative support for renewables.

Similarly, although the DECC paper stresses the need to make rational and financially sensible decisions about which renewables to support, nowhere does it acknowledge that onshore wind from the west coast of Scotland is one of the cheapest sources of renewable electricity anywhere on the planet.

The R-UK, as the major customer of Scottish wind-generated electricity, really does need continued investment in this source of inexpensive power. Bellicose and patronising words from DECC about finding alternative electricity from other countries do absolutely nothing for the future of the electricity system of the British Isles.

Frankly, in the event of Scottish independence, the R-UK needs Scotland more than Scotland needs us. And, lastly, I do think it strange that a UK minister who has agreed a subsidy for new nuclear power stations in England of over £90 a megawatt hour should hold the Scottish government to account for subsidising its own renewables at less than half this cost – and also achieving binding EU targets that the R-UK will spectacularly miss.

Chris Goodall has published a range of books exploring energy and environmental issues. He is a contributor to the Guardian, regularly delivers talks and presentations on climate change issues, and provides consulting advice to businesses and other institutions.