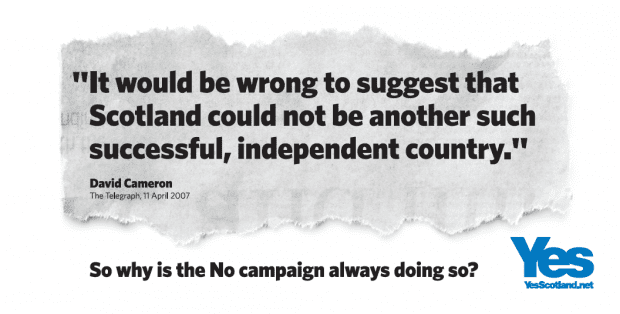 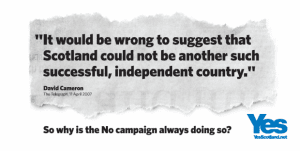 Scotland’s referendum on independence is very important and voters need to be able to hear both sides of the debate before making up their minds.  The latest polls show that the result is too close to call but the momentum is with the YES side which has gained 8% in a month and only needs to gain just over 3% take to the lead.

This pressure on the NO camp has led to isolated incidents with some biased bosses sending letters and even making speeches to their staff telling them that their jobs are at risk unless they vote NO.  This has happened in companies where other bosses have said they are either for independence or unfazed by it.  We believe this pressure is completely and utterly unacceptable and undemocratic. Employers should allow employees to make up their own minds and not pressure them to vote in one way or another with threats and unfounded negativity.

Business for Scotland has over 2,650 members who believe Scottish independence is the opportunity of a lifetime for their business, employees, families and communities.  We believe that economic growth, job creation and shared prosperity will result from a YES vote and that jobs and pensions are likely to be far more secure in an independent Scotland.

This week we have been approached by a concerned employee of a company in respect of a recent staff notice issued to him and his colleagues.  Let us be clear – our members would not tell their employees how to vote or even hint that their jobs would be at risk with a NO vote even though we believe a YES vote is far better for our economy and for job creation and security.  This is a decision for the people of Scotland as individuals.  Companies should not be scaremongering, especially in direct and formal internal communications. Our members believe that happy employees are respected employees and it is disrespectful to try force your own political views on your employees.

We were extremely disappointed that this notice and other statements by the NO Campaign supporting business people have lacked balance, contained significant untruths and perhaps most disappointingly often contain threats to future employment prospects.

Statements implying that Scotland cannot afford to be independent flies in the face of facts agreed by both NO and YES campaigners.  Even Prime Minister David Cameron stated publicly that: “It would be wrong to argue that Scotland could not be a successful, independent country.”  Scotland more than pays its way.  Just consider, for example, that official figures show in every one of the last 33 years Scotland has paid more tax per head than the rest of the UK and that Scotland spends less per head on social items like pensions and welfare than the rest of the UK.

Threats not based on facts

Several issues have been raised by these biased bosses and we will respond here:

All businesses that are successful succeed in no small part due to their dedicated workforces and many employees have told us they feel insulted by their bosses trying to scare them into voting NO with misleading and biased information.

Last week 200 business people, including some of the most successful business people in recent times in Scotland, put their names to a statement supporting independence on economic grounds.  We would suggest that in common with many large and small UK companies who deal internationally, the biggest danger in terms of business confidence is a possible British exit from the EU.  The in/out EU referendum promised by the Conservatives in 2017 could well see the UK leaving the EU, given public opinion in England and the rise of UKIP apparently in support of this position.

At present it would appear that a Conservative and UKIP coalition is a realistic possibility for the next Westminster government.  Business for Scotland consequently believes that the best place of businesses trading internationally is the safe haven of an independent Scotland as a valued member of the EU.

Scotland’s oil bonus will still last for generations before depleting but even without oil Scotland has a strong diverse economy that produces an income about the same per head as the rest of the UK.  With the bonus of oil, Scotland is a very wealthy nation.  We can be a wealthier society if we channel our best assets and huge resources in our own Scottish interests.  We are fortunate to have a strong and diverse economy with leadership and opportunity in sectors such as Food and Drink, Life Sciences, Education, Manufacturing, Tourism, Renewable Energy and Oil and Gas.  Indeed, Scotland’s economy is so strong that we paid £800 more tax per head last year than all the rest of the UK and if Scotland had been independent 5 years ago it would have generated a surplus of £8.3 billion over this period compared to being part of the UK.

We have a country blessed with hard working, well educated and proud people; our people are our greatest asset and all we need to do is believe in ourselves to be successful.  With less than 9% of the votes in Westminster, Scotland’s interests never have and never will be the primary concern of any Westminster government of any political leaning.  Once we return power to the people of Scotland, all decisions about Scotland’s future will be taken by those who care most and know the most about Scotland – the people who live and work here.  We firmly believe as business people ourselves that independence will be in the best interest of all businesses and their employees.

A version of this letter has been supplied to employees of some companies already and we will create bespoke responses for the employees of other companies who behave in this unacceptable manner.  Have you been pressured by your boss to Vote No with unsubstantiated threats and scare stories?  If so let us know and we will respond to you and your colleagues directly because democracy matters and you need both sides of the story.