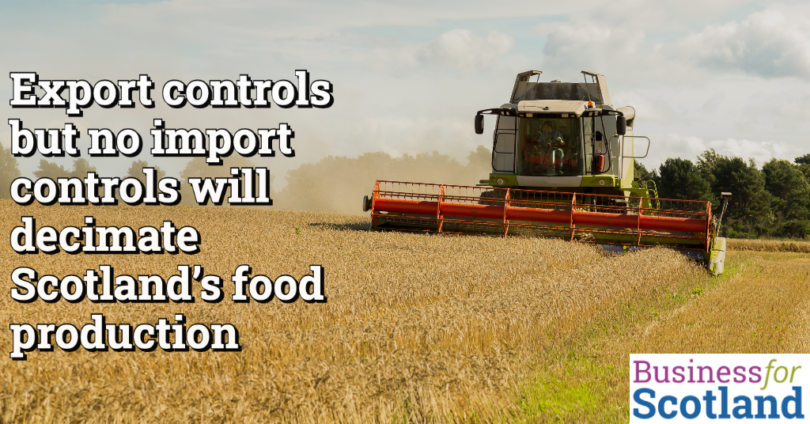 Boris Johnson’s oven-ready Brexit deal is a dog’s dinner. In a sign of desperation, the UK Government has delayed import controls  for a fourth time. The President of Scotland’s farming union criticised the move yesterday as “total madness”.

Sometimes countries impose import controls to protect their own producers. There is probably no other country in history that has had export controls but no import controls. It is like a “how to” guide to damage your own economy.

The only way to avoid both import controls and export controls between the EU and the UK is to rejoin the free market. When the UK left the EU, that created a border. All goods coming into the EU face strict checks. But there are no checks the other way.

Controls only in one direction are damaging domestic food production. The UK – and Scotland in particular as Scotland is a major food and drink exporter – economies will shrink and we will be more dependent on imported food.

“We are working with our hands tied behind our backs while our Government makes it easy for our competitors,” said Scott Walker, CEO of the National Union of Farmers Scotland.

The reason for the move is clear. Implementing Brexit import controls will push food prices up further and make the cost of living crisis worse. But the only way that the UK can resolve that situation is to rejoin the single market.

In the long run, one way checks will damage the UK’s balance of payments (imports-exports) and reduce its global competitiveness. The IMF already says the UK will slide to the bottom of the G7 by next year.

The Scottish food sector is suffering particularly – production is shrinking, some businesses are going to the wall and the well-being of people in the sector is becoming a cause for concern. Scottish food producers can’t get EU seasonal workers and are reducing what they plant. Scotland and the UK will be even more dependent on imported food as a result.

Food and drink exports to the EU have already fallen by a quarter or more. Last year, milk and dairy and beef and lamb exports were decimated.

Scott Walker, Chief Exec of NFU Scotland said: “Checks on EU goods entering UK put back. Fourth time it’s happened. We make it easy for imports but our food exports face extensive paperwork and long queues to get to the EU. Utter madness. We are working with our hands tied behind our backs while our Government makes it easy for our competitors.

The President of the NFUS Martin Kennedy agreed: “Total madness, especially right now, how short-sighted can you get?

The evidence is clear – Brexit is damaging food production in Scotland

Scotland’s food and farming sector is hard hit by Brexit and the other global factors that are feeding into the current crisis. Sectors from fruit, to fish to pigs are struggling to deal with all of the challenges that they face.

The House of Commons rural affairs committee found that the lack of seasonal workers due to Brexit is already making the UK more dependent on imported food. The inquiry report said:

“We found clear evidence that labour shortages have badly affected the food and farming industry — threatening food security, the welfare of animals and the mental health of those working in the sector.”

Newspapers reported earlier this week that the UK cabinet is drawing up emergency plans to confront the cost of living crisis – including reviewing tariffs on food imports. The delayed import controls at the UK’s ports also appear to affect meat products from the rest of the world.

David Frost, who negotiated Britain’s Brexit deal, tweeted that a solution to the UK’s looming food crisis would be to drop all tariffs on food coming from the rest of the world. “

Obviously we should scrap tariffs on food we don’t produce. But the real gains come from scrapping them on food we do – beef, lamb, etc. This will bring our prices down to world levels & help with the cost of living crisis. It’s in our hands – we could do it tomorrow.”

Others responded by referring to “the great betrayal” of 1921 when the UK Government abandoned support for agriculture and fishing – believing it could be replaced by cheap imports from the Empire. In the following decade, food production collapsed and Scotland lost 8% of its population (compared to 5% in England) due to emigration by desperate people, many of whom simply abandoned their crofts and farms.

Scotland didn’t vote for Brexit – and the hard border that has been imposed by the EU was a choice of a UK Government that Scotland also didn’t vote for.

The way the current UK Government has implemented Brexit is reckless. The latest decision over import controls is a sign of desperation – it is an acknowledgment that far from being done, Brexit is a disaster. It is not implementable. The EU has implemented its side – and that is causing an imbalance which over time will break Britain.

An independent Scotland could immediately become an associate member of the EU while negotiating for full accession. Without independence, Scotland is exposed to the “total madness” of the UK’s Brexit.