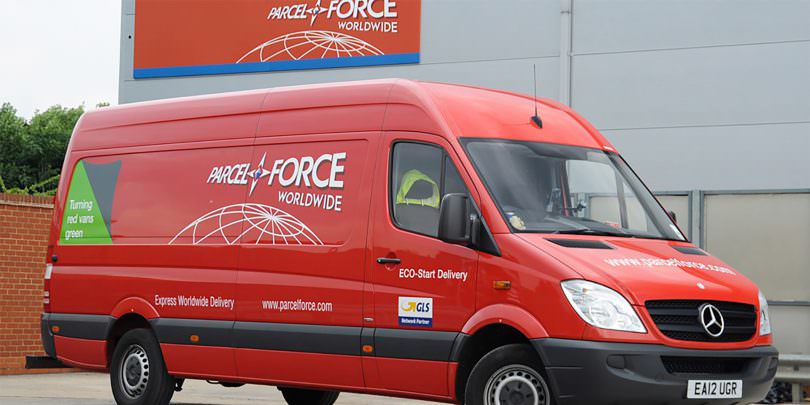 Ahead of Black Friday, the biggest online shopping day of the year, it is worth noting that Scottish consumers are being repeatedly ‘ripped off’ by online retailers and delivery companies due to the costly delivery fees imposed on shoppers in rural areas.

New data has suggested that delivery surcharges in Scotland have reached a new high, with Scottish consumers paying £40.1 million in additional delivery fees relative to the rest of the UK.

This has been a growing problem for years, with Scottish consumers frequently having to pay extra delivery costs, even when products have stated free delivery in the UK mainland. For example, in Northern regions of Scotland, people are paying, on average, 30% more than consumers in the rest of the UK for the delivery of products.

Parcels being delivered from London to Inverness can often be more expensive than delivering the same parcel from Inverness to London.

Parcel Force, one of the country’s leading couriers, charge £65.50 for a 10kg parcel to be sent from London to Inverness. However, if the same parcel was to be sent from Inverness to London, Parcel Force would only charge £9.54. You know, because London isn’t rural? No, it doesn’t seem right to us either. It is simply a rip off.

Other companies, such as Hermes, do not discriminate against rural Scotland quite as much, with only a slight difference in costs. Menzies Distribution (a Scottish Company), on the other hand, has taken huge steps to stop this disadvantage completely. This company has been praised by MSP Richard Lochead (who has campaigned tirelessly to end the rural surcharges) after launching the Highland Parcels service and listening to the demands of the Scottish Government and people. This service offers a £4.99 delivery fee to residents in the Highlands and Islands of Scotland, regardless of their postcode. 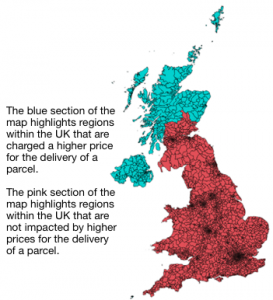 We can see from the map above that additional delivery charges are imposed on a huge number of areas in Scotland. Despite most of the Highlands being a part of the mainland, this area is experiencing great disadvantage. We can see that a large section of the Scottish mainland is suffering additional delivery fees and are charged similar prices to those on the islands, even though the Scottish mainland is more accessible.

For example, in Argyll and Bute, consumers spent £3.95m in 2018 on parcel delivery surcharges, an increase from £3.77m in 2017, simply because of where they live. These excessive costs are unjust, considering most areas in Argyll and Bute are part of the mainland and are very accessible.

To deliver a 10kg parcel from the UK mainland to Tarbert, Argyll and Bute (also part of the country’s mainland), prices range from £7.25 (3+ day delivery) to £65.50 (48-hour delivery). However, these prices do not vary when we consider the same parcel being delivered to the island of Islay. Therefore, it is clear that rural areas, such as Tarbert, are being disadvantaged with pricey delivery fees, even though such areas are part of the country’s mainland.

This inequality becomes increasingly evident when we consider delivery costs in London. For example, to send a 10kg parcel from the UK mainland to London, prices vary from as little as £5.49 (3+ day delivery) to £30.99 (Next day). Next day delivery, which was not an option in the Highlands and Islands, despite much of this region being part of the UK mainland, was available in London for as cheap as £12.20 for this size of parcel.

Westminster failing to solve the issue

Despite the continuing growth of online shopping, with online sales increasing from 3.4% to 18.0% of total sales between 2007 and 2018 across the UK, Scottish consumers are still being disadvantaged. The power to regulate parcel delivery surcharging is reserved to the UK Government, however, little is being done in Westminster to resolve this worsening issue that millions of Scottish consumers face.

The Scottish Government are also developing an interactive data hub this year, where users can measure the fairness of delivery fees, allowing for greater transparency and a drive towards change. Independent econometric research will be adopted to understand what constitutes a reasonable delivery charge in remote and rural Scotland. This data will be used to develop an online hub where individuals can determine whether they have been overcharged for the delivery of an item.

Certain Conservative MPs, such as Douglas Ross of Moray, have taken action on the matter. For example, he has held a Westminster Hall debate on the issue, raised it at Business questions and proposed that the Scottish Affairs Committee hold an inquiry into the matter, which it did. However, in Westminster, there is still a lack of concern for this issue. This was evident when SNP MP, Drew Hendry, took the fight to the House of Commons in 2016 and his proposals were ironically blocked by the votes of Conservative MPs.

The ultimate responsibility lies with the UK Government to bring an end to additional delivery fees in Scotland and offer the necessary protection to Scottish businesses and consumers.