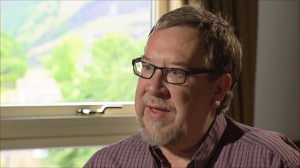 Michael Fry of Wealthy Nation is a Conservative for independence

Today the Scottish Conservative Party has published its report on further devolution. While going further than the lukewarm Labour version, it remains unambitious. Of the top seven sources of income, the report proposes fully devolving just one. This hardly provides the ‘responsibility’ some claim it does.

This does, however, recognise a direction of travel across UK politics. Every single unionist party (excepting UKIP) is trying to convince the people of Scotland that they believe in Scotland taking more control over its affairs. However the only way to guarantee more powers is by voting for independence.

Many Conservative supporters are voting for independence. The group Wealthy Nation – led by Scottish historian Michael Fry and containing former Conservative MSP Nick Johnstone – is an example. They see the sense in giving financial responsibility where there is spending responsibility.

Independent powers for a stronger economy

For those voters a Yes vote in September is now the best option. Even if the limited Conservative package was ever adopted, it would represent a 1% rise in Scotland’s tax powers per year. That’s a snail’s pace. It would take a full 100 years for Scotland to control its own income.

Historian Michael Fry has written at length on why independence is a better option. He wrote “we think Scottish independencre is a logical extension of our belief in personal, political, social and economic freedom”.

Former Conservative MSP Nick Johnstone said, “Having followed the arguments of the Yes and No campaigns, my conclusion is that while a devolved parliament can do good things – and it has – it lacks the core economic and welfare powers to tackle the fundamental issues.”

Conservative donor and businessperson Laurie Clark spoke to Prime Minister David Cameron on his support for independence: “For me, a Yes vote represents the end of an unfair union but the beginning of a fairer and mutualy beneficial partnership between Scotland and the rest of the UK.”

Peter de Vink was a Conservative and is now an independent councillor in Midlothian. He writes that “the concept of independence entails more self-responsibility, individual freedom, competition and local democracy – the very ideals underpinning my political persuasion.”

Rather than wait for Westminster to slowly and imperfectly reform itself through a ‘trickle down’ of powers, a Yes vote guarantees that Scotland will gain economic powers to improve Scotland’s economy. Scotland will gain 100% of tax powers for the 2016 Scottish election. That’s a reform worth voting for.