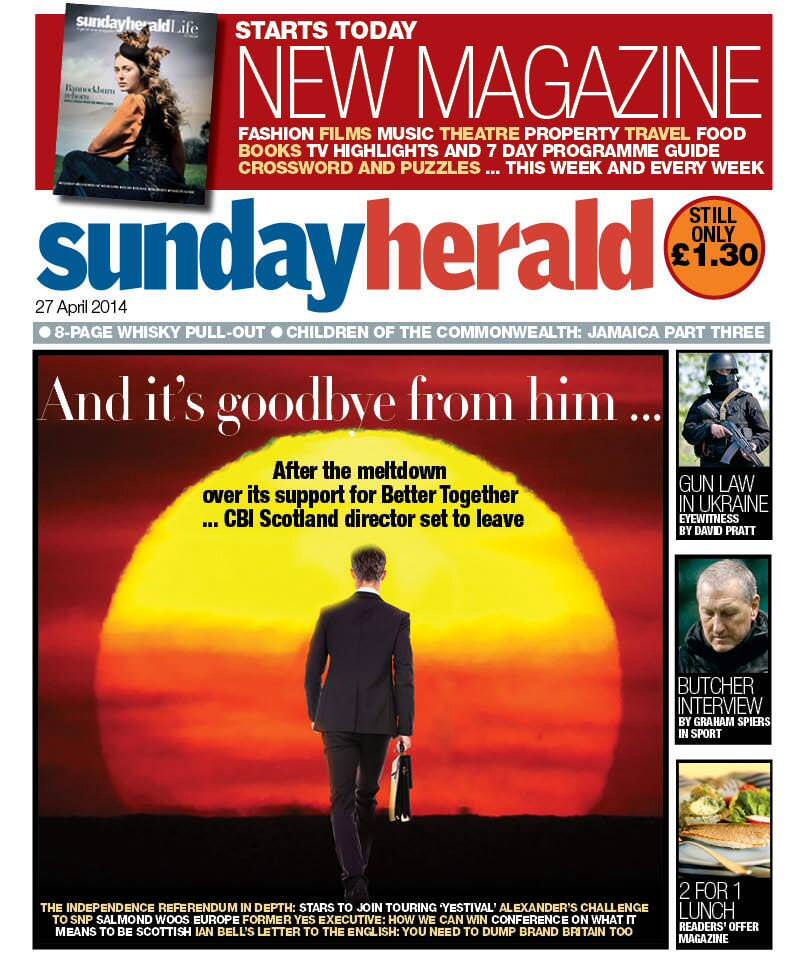 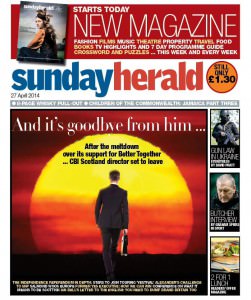 Breaking News April 27th:  After the meltdown over its support for Better Together, CBI Scotland director is set to leave according to the Sunday Herald, Scotland The director of CBI Scotland has announced his ­retirement in the wake of the business group’s disastrous intervention in the independence referendum.

Tony Banks, the chairman of Business for Scotland, said: “The news that Mr McMillan will soon be departing from CBI Scotland comes as no surprise. His silence during the last week speaks volumes. Mr McMillan’s retirement may suggest to some people an element of scapegoating to distract from the central CBI figure, ­director general John Cridland. His own position now looks untenable.”

In the latest turn of affairs the CBI has now asked to be removed from the Electoral Commission’s list of registered campaigning bodies.  It now says this was a mistake, that a “junior” person signed the forms and management did not know about it until it was reported on the BBC. You couldn’t make it up. It’s like something Malcolm Tucker would come up with. In fact, scrap that, Malcolm Tucker would come up with something more convincing.

You’d think the CBI would learn from its mistakes. However, it is still claiming it has thousands of members in Scotland when it does not, and that its membership backs an anti-independence stance which is not true either (in public or in private).  How can anyone take the leadership of the CBI seriously now?

1) Was the registration a “mistake” or was it signed off by the CBI management?

In the Herald article last week this quote was used from the CBI:

“When the Sunday Herald contacted CBI Scotland director Iain McMillan, he directed all enquiries on the matter to the UK press office. Asked if the decision to register with the Electoral Commission was made after discussions with Scottish or UK members, a CBI spokesman said: “We have talked to members regularly in Scotland and across the UK at CBI events and via our system of committees and councils.”, He added that the “final position” was signed off by CBI Scotland’s council – its membership decision-making body.”

But then lots of members of that Council have resigned and claimed they were not been consulted on either the CBI’s decision to take a position and actively campaign against independence or to register with the Electoral Commission.  If they had, would STV and the Law Society not have said “hold on if you do this we will have to resign”?

So at first the CBI claimed to have sign off on the decisions, but now they say they didn’t know about the registration. It was all that “junior” member of staff’s fault. John Cridland claims he heard about the registration on the BBC. By the way, that “junior” member of staff is their Head of Campaigns in London, Richard Maughan, – a senior manager responsible for all the CBI’s active political campaigning. That tells you a lot.

From the CBI press release:

“Following a review by the CBI board and in the light of legal advice from its lawyers and Queen’s Counsel it has emerged that the application should not have been made: it did not have approval under the CBI’s normal corporate governance procedures and was not signed by an authorised signatory. Therefore, the CBI has asked the Electoral Commission to render its application null and void with immediate effect.”

This is an interesting statement, not least because John Cridland the CBI Director General was quoted in the Herald and the CBI in other media outlets defending the decision for a week. If, as he claimed in interviews today, he immediately took legal advice and started to consider withdrawing the registration (we believe withdrawing isn’t actually possible by the way) why was he defending it?

“CBI director general John Cridland defended the decision to back Better Together this morning, insisting it was made for “for compliance reasons” and did not represent any wish to campaign to influence voters’ opinions.”

He also said in the Sunday Herald:

“Nothing changed this weekend about the CBI’s position on the issue. All that changed is that for compliance reasons, we decided that we needed to register to be on the right side of those regulations.”

Lets be clear, no organisation needs to register unless it is identified as campaigning by the Electoral Commission and planning to spend more than £10,000.  When you sign the form (as Business for Scotland has) it asks very clearly what outcome you intend to campaign for.  No confusion there!

No Doubt about the meaning of registration.

John Cridland backed the decision to register. He led the most recent element of the CBI’s long-standing and very active campaign against the Scottish Government’s white paper and was the one who said “we are better together”. To claim the decision to register for the purpose of campaigning against independence was simply a mistake by some “junior” staffer is simply not credible.

Now, realising that with no mandate and probably more than 1/3 of their Scottish membership having resigned, with more pending, and the emergence (from Business for Scotland investigations) that both their active campaigning for some months and associated by-product of registration actually contravened the Companies Acts and the terms of the CBI’s Royal Charter, they have decided to try backtracking. But it won’t work. They have already crossed a line and they are between a rock and hard place. It is not even clear whether they should have legally registered given their status under Royal Charter, never mind the gross breach of the Charter by actively campaigning against independence without a resolution of members.  Their excuse on registration is that the form was not filled in by a senior enough person, but in truth it makes no difference. We are told the decision was agreed by the CBI Scotland Council unless they are now admitting that was a lie?

Confused? Don’t be. Listen to Business for Scotland’s Brandon Malone on the BBC today explaining the contradictions at the heart of the CBI’s problem.

In a nutshell, the CBI has almost certainly broken the law and now it is trying to spin its way out of a situation of its own creation.

If the CBI’s annual dinner in Scotland on 28th August is once again turned into “an anti independence rally” as reported by Ian McConnell of the Herald then it will contravene both the Electoral Commission rules and the CBI’s Royal Charter.  As they appear to have already lined up the Prime Minister to speak at their dinner they could resolve this problem by bringing balance through an invitation to the First Minister to speak at the same event. In fact, why not host a debate between the PM and FM at the annual dinner? Business for Scotland would even buy a table.

It is press release yesterday the CBI claimed “the CBI speaks on behalf of 190,000 businesses of all sizes and sectors”

That is 10,000 less that they were claiming last week.  Later in the same release they also say:

“Larger and growing businesses also tend to join the CBI directly and of these, 1,200 businesses are registered and operating in Scotland”.

That is 24,000 less than they were claiming last week.

The CBI across the whole of the UK seems to have less than 1,800 members and probably around 60 or less who are actually based in Scotland.  They are not the UK’s biggest business network. They are still misleading people on their numbers.  You can’t have the Law Society of Scotland join your organisation and then claim to speak for all the lawyers in Scotland without even consulting the Law Society about your political stance. Hence, at least in part, is why the Law Society resigned its CBI membership.

As for the remaining CBI membership, 90% of it has stated it is neutral in the independence debate.

Meantime, Business for Scotland grows from strength to strength. Our members join as individuals. They are all experienced businesspeople, mostly but not exclusively running proper Scottish SMEs which are the lifeblood of Scotland’s economy. SMEs represent 99.3pc of the Scottish private sector. And every one of our members signs a business community declaration in favour of independence. The organisation resolved at its inception to promote the interests of its members and in our view the broader Scottish business community by spending time and resources campaigning for Scottish independence. We believe it will unlock Scotland’s economic potential, because independence is the business opportunity of a lifetime.