Today’s release from the CBI in London is an entirely one-sided misrepresentation of the business and economic evidence concerning a vote for Scottish independence. Business for Scotland – which has a membership of over 1,600 Scottish businesspeople – considers that Scotland will be better off financially with the full economic powers of independence.

The CBI  has failed to consult its own members in Scotland (the number of which are unknown) on the issue of independence.  In the past it has opposed every  step towards greater economic powers for Scotland. It even opposed the establishment of the Scottish Parliament,  so it comes as no surprise that it is now opposing independence in the same knee-jerk fashion without giving a full consideration to the economic opportunities of an independent Scotland.

The CBI report  highlights the fact that Scotland is a wealthy nation, but somehow fails to recognise that Scotland could be a successful independent country.

Business for Scotland Chief Executive, Gordon MacIntyre-Kemp, challenged the Director of the CBI on Radio Scotland this morning, stating “They’re talking about the costs of independence, but they’re totally ignoring the benefits of independence – and that’s not representative of their membership.”

Before considering the one-sided arguments made by the CBI today – it is worth highlighting the crucial facts that Business for Scotland has previously published.

1) Scotland is a wealthy country which has provided a net contribution to UK finances of £8.3 billion over the past 5 years.

2) Business groups in Scotland see tremendous opportunities with independence. This is why Business for Scotland is the country’s fastest growing business network. Scotland can grow its economy and create more jobs for people in Scotland.

4) Scotland’s economic future will not be decided by representatives outside of Scotland who are out of touch with business in Scotland, especially the Small and Medium Enterprise community which makes up the vast majority of businesses in Scotland.

A) Scotland is a wealthy country 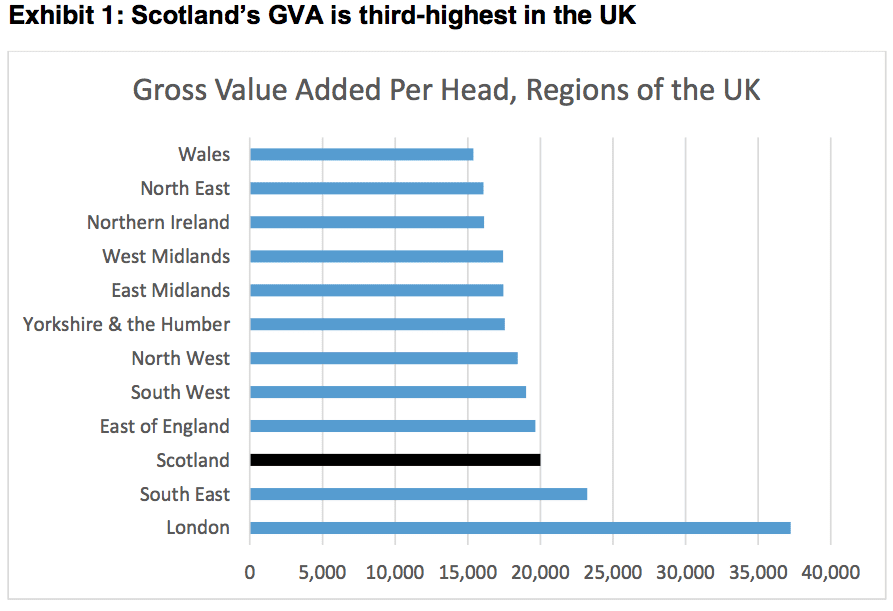 The start of the CBI report presents many of Scotland’s economic strengths. These include Scotland’s strong fiscal position over the past 5 years, Scotland’s higher tax generation, the fact that Scotland is the 3rd richest area of the UK, that Scotland exports almost £100 billion in goods and services and that Scotland has many world leading industries.

This presents a strong case that Scotland could be a wealthy independent nation. Scotland’s success in these areas is a result of high skills, vast natural resources and ingenuity in a range of sectors. The success of Scotch whisky, North Sea oil, Scottish food products, manufacturing, renewables and the university sector is not dependent on David Cameron and Westminster. This economic reality, which the CBI concedes, stands in strange contrast to their subsequent negative message.

B) Scotland has a dire fiscal future

Scotland, like all countries, faces challenges to improve its economy and budgeting. The CBI, however, makes several serious errors in its approach. Firstly,  its report assumes the Office for Budgetary Responsibility’s projections of oil revenue are accurate. They have in fact been challenged by figures from the UK’s own energy ministry and by other economic and energy agencies.

A key example is taxation. The CBI’s claims are that Scotland would need to generate £250 million over its first 5 years to fund its stated commitments.

But that is only looking at one side of the equation. For example, the CBI includes the costs of childcare services and tax reductions in its analysis but does not include any increase in subsequent revenues. Yet, Professor Sir Donald MacKay, former Chair of Scottish Enterprise, has explained how  expanding childcare increases overall tax take. A 6% rise in female labour market activity would boost tax revenue by £700 million.

This is only one example within a whole range of sectors where an independent Scotland can boost revenue and increase efficiency. The CBI do not include a single example of this kind within their analysis. (Other examples of savings in borders, tax and political administration have previously been set out by Business for Scotland)

3) A Sterling currency union is unlikely

Curiously enough, the CBI report considers a Sterling currency union within the UK to be ideal, but seems to think that as soon as Scotland became independent, it would become unworkable and would produce tensions comparable to the Eurozone as the economies diverged.  This approach is flawed. As evidence recently submitted by Professor Anton Muscatelli of the University of Glasgow stated, a Sterling union is different and would provide mutual economic benefits for Scotland and the rest of the UK.

The Governor of the UK’s Central Bank, Mark Carney, similarly set out the technical process by which a Sterling union can be established. This will form an important procedural aspect of negotiations following independence. There could be greater certainty on this process, yet unfortunately the UK Government have refused to carry out any consultative discussions.

4) Borders and barriers to trade

The CBI repeat the claim that independence risks jeopardising an ‘internal market’. Business for Scotland previously published numerous reasons why this concern is overstated.

1) It is in no one’s interest to disrupt trade.

2) The European Common Market is an overlapping trade area which prevents barriers.

4) The rest of the UK benefit from buying Scottish goods and services (including energy).

5) The rest of the UK benefits from selling goods to Scotland as this guarantees jobs and income.

The CBI repeats the No Campaign’s claims that the UK protects Scotland’s EU membership. Yet all political evidence from Westminster suggests that it is the UK which is considering leaving the EU. Opinion polls find that there is a real risk of Scotland being taken out of the EU if Scotland votes No. The greatest uncertainty in this case comes from Westminster.

Furthermore, independent membership of the European Union will bring significant benefits to Scotland and business in Scotland. This includes an increase in CAP payments to the Scottish agricultural sector, an increase in direct lobbying influence for fisheries and all Scottish companies for export within the EU market.

None of these issues are considered in the CBI report. Instead the report talks up Westminster’s ‘success’ at EU level, despite Britain becoming increasingly isolated due to its attempts to unilaterally renegotiate its previous agreements.

The CBI reports ends with what it views as risks to the energy market, higher education and the food and drink sectors.

This is an imbalanced overview of the economics of independence. Changing the political system presents challenges and opportunities for businesses. The CBI report does not even consider potential improvements to the tax system, labour relations, migration and industrial policy or global export promotion. Without comparing these factors the report lacks credibility.

Scotland will benefit from economic and business policies that seek out opportunities. Control of domestic policy, spending, taxation and regulation will provide numerous opportunities for business in Scotland to thrive. The CBI report follows previous assumptions that change brings unnecessary risk. Yet this is far from the whole case. Opportunities can outweigh risks. That is the case the CBI does not appear to have considered.