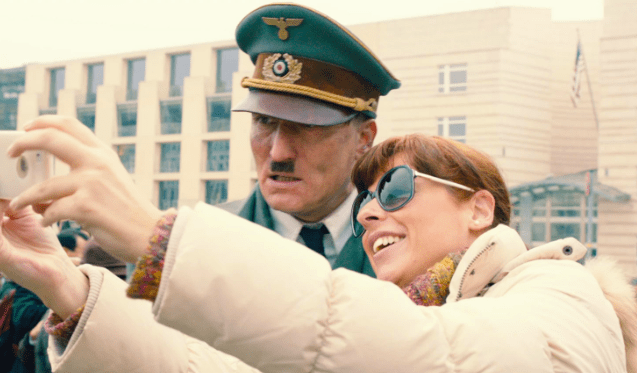 Look Who’s Back.. a little too close to reality?

We’ve all been there, it’s a Friday night and the family are at home and can’t agree on a movie. Finally you decide on a comedy but not which one, so you compromise and chose a movie that no one originally wanted to watch because the reviews were all 5 stars. Or is that just my family? Anyway with the words, “we’ll watch five minutes and if its no good we’ll switch it off”, I lined up a German subtitled black comedy called “Look Who’s Back” – five minutes after the movie ended we all sat in stunned silence almost unable to process how brilliant, politically significant and emotionally troublesome it was.

Look Who’s Back starts with the re-emergence of Hitler in modern day Berlin, the last thing he remembers is committing suicide and so he sets out to understand modern Germany and world politics. The deliberately hilarious first ten minutes eases you into the most shocking concept for a film. Part scripted and part visceral reality TV, Hitler sets off to make himself a media celebrity and get his plans for world domination back on track. The most shocking moments are the reality TV bits seamlessly merging with the scripted sections, showing ordinary Germans reacting to this man with a film crew who looks like Hitler. Discussing modern politics in street voxpop mode, “Yes immigration lowers our National IQ” he nods sagely to one of the Germans who seemed interested in his politics. He invites German football fans to beat up a man who shouts something unpatriotic, they do so in a shocking moment reminiscent of a certain Trump convention a year after the film’s release.

The movie struck me as a cross between Borat with more intellect but a lot more balls, and the taboo breaking intelligence of one of my favourite movies Jésus de Montréal where an actor thinks he is Jesus – but this really is Hitler though everyone thinks he is just a new highly sarcastic comic political commentator.

A poisonous brand of superiority politics

Don’t get me wrong this movie will make you feel uneasy but you will laugh despite yourself, the send up of a popular Hitler video meme is gut wrenchingly funny and my favourite line comes when Hitler has been taken off his TV show after evidence of his true character emerges. Two TV execs discussing the fall in ratings ask if it’s time to get him back? One turns to the other and states: “Yes, after all nobody can stay mad at Hitler for long.” You’ll laugh, but you might also cry.

The movie doesn’t really ask what would happen if Hitler himself came back but rather, is the core belief system of ethnic traditionalist superiority nationalism re-emerging in all of western society? Trump, Johnson, Farage, media driven Brexit xenophobia and anti-immigration, racist violence, an actual fascist missing out on the Austrian presidency by a handful of votes… none of them are a new Hitler but they all draw from the same poisonous brand of superiority politics. Putting the Great back in Great Britain, making America great again – it makes my skin crawl and yet British nationalists with an astonishing lack of self awareness claim the Scottish independence movement is somehow linked to that style of thinking when in fact it is the antithesis to fascist nationalism – the solution to the problem they cause.

There is a world of difference between the civic minded, internationally and environmentally focused, progressive and enlightened Scottish independence movement and the xenophobic, isolationist, traditionalist, totally flawed yet still triumphant unreconstructed British nationalism that’s on the rise. Nationalism in a nation that controls its own destiny and even seeks to impose it’s will on the rest of the world is a dangerous beast and make no mistake the future of British politics belongs to one of the British Nationalist parties, the Conservatives, or if Brexit is watered down, Ukip. Labour in Scotland are a British nationalist party but I haven’t given up hope on them yet seeing the light. However in England, Labour are reverting to old style unelectable socialism that may split the party in two, ending all opposition to the British Nationalist party’s coming multi-generational dominance of Westminster.

For a few years now I have been becoming more and more ill at ease with the rising tide of British nationalism. Economic uncertainty, austerity and personal feelings of insecurity, coupled with increasing dissent with growing inequality have laid the psychological foundations for despair among those of a conservative mind set. Conservatism at its root is about nostalgia, it’s about tradition, a resistance to change and fear of progress. The poorer conservatives / traditionalists (many of whom vote Labour) see the state struggling and wish to put the Great back in Britain, for if you repair the State you bring back the mechanism they see as underpinning their own success. The wealthier ones have seen the economy move from producer capitalism to financialisation, and by avoiding taxes, off-shoring and profiting from housing and share price bubbles (their wealth bailed out by the state when required) now more than ever view the strong national institution of Great Britain as politically important.

Faced with the evidence of a failing economic model and unravelling social infrastructure those of a conservative mindset pine for yesteryear, for a powerful military (Trident), for Britain’s place in the world as a leading nation and arbitrator of global politics, they dream of foreign markets opening up to us without the need for troublesome alliances or tricky trade deals and for foreigners to once again know their place. The trouble is these days are gone, there is no way back and Brexit has sent us a crystal clear message that middle England and unionist traditionalists in Scotland have decided to double down on the negative identity politics of the past and isolate forward looking people of Scotland (not just Scots) from the rest of the world.

Brexit brought out the worst in people, there were plenty of reasons to be annoyed with the EU and not all voted leave for negative reasons, but for the masses Brexit was an exercise in media driven xenophobic resentment, encouraging old fashioned small mindedness now out of step with the world we live in.  Compare the rise of influence of Ukip politics with the observation of the late Welsh historian Dr John Davis who said “This (Scotland) is for the whole of mankind an inspiring example of a country inhabited by people basing their nationality, on civic rather than ethnic identity.” For any country in the world… to base its values on those of principle, rather than merely what has gone before… this is always a good thing!