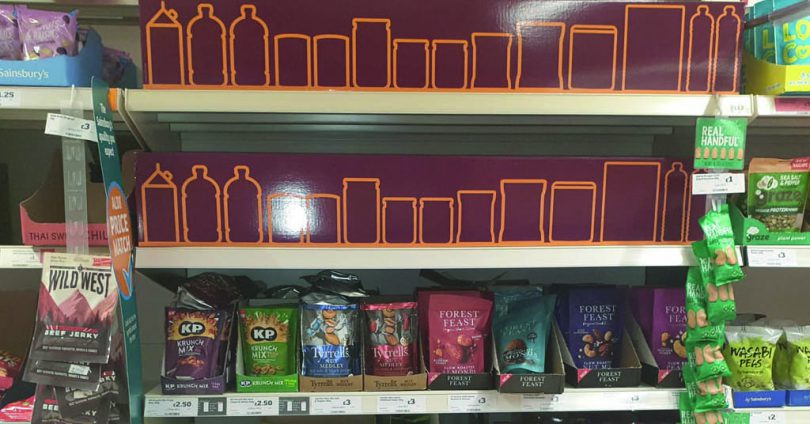 Brexit remains the main factor to blame for food shortages in shops and supermarkets as attempts to make the so-called ”pingdemic” a scapegoat are increasingly undermined.

Warnings about empty shelves in shops and supermarkets began when Boris Johnson imposed his woeful Brexit trade deal which kicked in on January 1. Mounting red tape and other problems led to a growing shortage of lorry drivers able and prepared to take food from Europe to the UK. 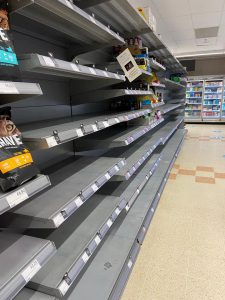 Above and main photograph: pictures of empty shelves supplied by respondents to a Believe in Scotland survey

The Road Haulage Association (RHA) estimated the UK was 60,000 drivers short of the number needed to operate properly, even before Covid. They now put that figure as high as 100,000.  The RHA  puts the bulk of the blame on Brexit.

Since then there have been moves to shift that blame on to the growing number of drivers in self-isolation after being in contact with Covid. But mounting evidence suggest that’s not the main factor.

The Road Haulage Association conducted a survey of its members and a report posted on its website yesterday said the results showed the main reason perceived for the current crisis was Brexit.

The report said 58% of those who responded said Brexit was a reason behind the shortage. It stated: ‘’The current vacancy levels additionally show that there are not enough UK drivers who are trained and currently willing to be employed to fill the vacancies in the industry. From the perspective of SMEs, Brexit is the main reason for the driver shortage, followed by retiring drivers and drivers leaving for another industry.’’

The dairy giant Arla, which has a dairy in Lockerbie and which supplies milk to all major UK supermarkets, said yesterday that the lorry driver shortage is hitting  milk supplies.

UK managing director Ash Amirahmadi said the firm normally supplied 2,400 stores a day, but last weekend could not deliver milk to 600 of those.

He warned of a summer of disruption and urged the UK government to act. “It’s very worrying for customers when they go into shops and find that the shelves are empty,” he said.

Mr Amirahmadi said: “Since the beginning of April, we have experienced driver shortages. That has increased to such a level now that we are not able to deliver milk to every store that we’d like to.’’

Arla was suffering more from the lack of drivers than from Covid alerts, said the managing director. “Self-isolation doesn’t seem to be impacting us as much, because we’re a very mechanised, automated business,” he added.

“The food is there in the factories, it’s just about getting it to the shops. So that’s our key problem.”

The vast majority of respondents in a survey by Believe in Scotland blamed Brexit for food shortages in shops in a report published yesterday.

Almost 90% of those who responded to the survey have noticed more empty shelves in shops and supermarkets. And 93.3% thought that Brexit was most to blame for the situation.

The real problem at the heart of food shortage is Brexit. That’s it. No other country is having these issues

A recent report by the online news organisation Byline Times said Covid was a ‘’convenient scapegoat’’ and that the empty shelves were the result of Brexit and not the ‘’pingdemic’’.

One farmer told Byline Times: ‘’[The right wing media] are trying to scapegoat the blame on to the test and trace ping system because they want to deflect the blame from Brexit. The real problem at the heart of food shortage is Brexit. That’s it. No other country is having these issues.’’