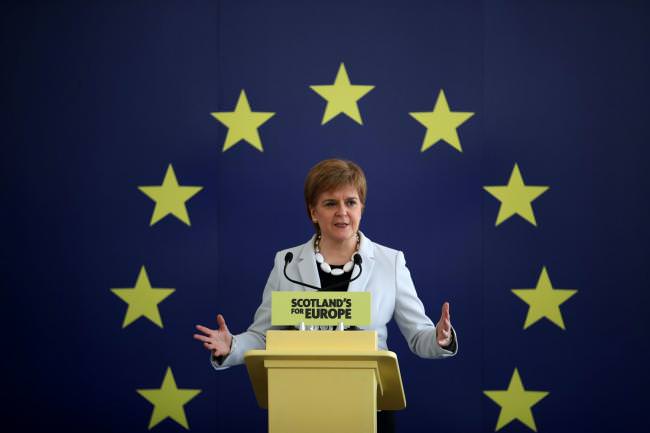 Scotland, by virtue of still being part of the UK, has now left the EU and the UK is in a transition period concluding at the end of 2020. Therefore, the UK does not qualify for financial support from Brussels for dealing with the COVID-19 crisis and recovering afterwards, and as a direct result, Scotland is missing out on valuable financial support.

According to the Scottish Parliament Information Centre (SPICE), Scotland, as part of the UK, has received a total of £3.7bn to help tackle the COVID-19 crisis and recover afterwards. The UK Government is now, however, indebted to a total of £1.95 trillion. It is important to consider that the money Scotland is currently receiving to deal with the consequences of coronavirus is not a gift or a grant, but a loan of which Scotland will have to pay a population percentage share (8.4%) of the debt interest. This also holds true whether some of that funding actually arrives in Scotland or is reallocated to companies elsewhere in the UK.

This sum has been criticised and questioned by the Scottish Finance Minister, Kate Forbes, who warned that the costs of dealing with COVID-19 are significantly higher than the funding provided by the UK Government and that £60m of the business support funds that were promised were never actually delivered. She also suggested that the UK is not providing Scotland with enough money to deal with the COVID-19 crisis.

How the EU supports its members

On 21st July, EU leaders agreed on an overall budget of €1.824 trillion for 2021-2027. Prior to this, in parliament, the European Commission outlined a €750bn economic stimulus plan to help relieve the financial shock of the coronavirus pandemic and contribute towards creating a sustainable future for all EU member countries. This recovery plan includes €390bn in grants and €360bn in loans.

The EU recovery package will benefit countries that have been particularly affected by the global health crisis and have faced the most severe economic consequences. This is demonstrated by the graphic below that shows countries such as Italy and Spain, who have faced some of the highest death rates and strictest lockdowns during the peak of the virus, being allocated the highest sums of grant funds. 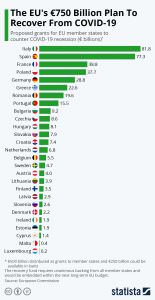 The UK similarly has faced severe consequences as a result of COVID-19; a high death rate throughout the crisis and the economy currently facing a dramatic recession. As one of the most severely impacted countries, it is likely that the UK would have been allocated a large sum of grant funding and received a fair proportion of the €1.824 trillion budget.

The EU’s €390bn grant fund includes €313bn of funding from the European Recovery and Resilience Facility and the other €77bn funds the existing EU Budget Programmes.

Such funding and grant programmes have been of great benefit to Scotland. For example, HORIZON, which focuses on rural development, and the Just Transition Fund, which helps member countries transition to a green and sustainable future. Moreover, Scotland’s higher education system has been provided with €533 million from EU funding.

It is important to take into account how much financial support an independent Scotland could have received as an EU member, on top of this funding. The EU recovery funds allocation is based on the type of economic damage the country has experienced throughout the COVID-19 pandemic. Spain and Italy, highlighted above, are likely to receive about 5% of their GDP over the next three years. Therefore, when considering Scotland’s GDP of £178.6 billion in 2018, if Scotland received 3% of its GDP, it would have received approximately £5.4bn of additional funding.

This is evidently greater support than what is currently being offered to help Scotland deal with the effects of coronavirus from the UK. Moreover, the support offered by the UK Government is a loan, whereas 52% of the EU’s recovery package is offered as a grant.

Leaving the EU was a decision that Scotland rejected and, during this time of crisis, it can be suggested that an independent Scotland, as a member of the EU, would have received greater financial support from the EU and ultimately, its economy would have been in a better position to recover more quickly and effectively after the pandemic. Scotland would also have had the ability to borrow on top of the EU support mentioned above as an independent nation, leading to a quicker and more effective recovery overall.