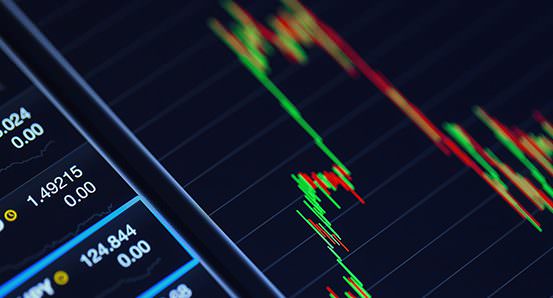 In the time since the announcement that there was to be a Brexit referendum in early 2016 to the Leave result in June 2016 and the chaotic negotiations that followed, the estimated cost to Scotland’s economy has been £3.4 billion in lost GDP growth.

While most forecasts deal in post-Brexit trade scenarios, many overlook the costs that the EU crisis has already inflicted on the Scottish and UK economies. The political uncertainty that has been present for three years now, arising from the inability of the UK political establishment to both govern domestic affairs and negotiate with the EU, has had a significant impact.

Prior to the EU referendum announcement, Scotland maintained an average quarterly growth rate of 0.92 per cent, afterwards it fell to 0.83 per cent — a difference of 0.1.

While this may seem small, at the level of the national economy it is significant. If 0.92 per cent growth had continued from quarter 1 of 2016 to quarter 4 of 2018, Scotland’s onshore GDP would have been £165.8 billion in 2018, when it was recorded as £162.4 billion. This is a difference of £3.4 billion. Divided by Scotland’s population this amounts to £623 per person. Crucially, Brexit has not happened yet, so any losses will now will likely be small compared to what happens when the UK does actually leave the EU. 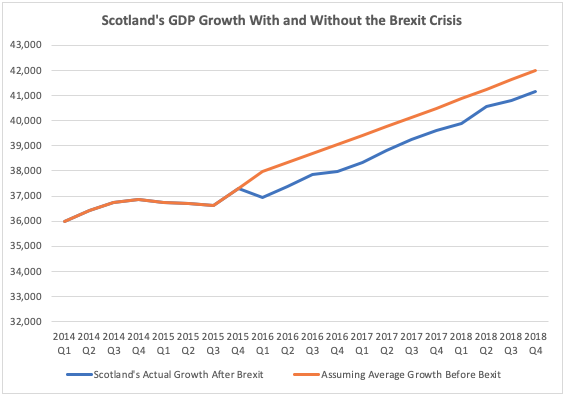 Yet if Scotland’s offshore economy is also considered, growth has actually been higher since the Brexit process began than in the years before it. The combined growth of the onshore and offshore economy was 0.91 per cent prior to Quarter 4 of 2015; it was 0.96 per cent afterwards.

This suggests that the offshore economy has mitigated the consequences of Brexit. However, offshore GDP performance is not necessarily a good indication of how the aggregate Scottish economy is performing. As the Fraser of Allender Institute put it:

“For most people in Scotland, how much is produced from an oil rig in the North Sea in a given quarter has little impact on their day-to-day economic situation […] Most of the investment is driven by overseas factors and international businesses dominate the market.”

“It’s also important to remember that GDP doesn’t capture how much of the wealth flowing from oil and gas production stays within Scotland […] [T]here is a net outflow of income from Scotland to the rest of the UK and/or overseas. A key reason for this is that the high level of overseas ownership amongst oil and gas operators mean that many of the profits have in the past flowed out of Scotland.”

Thus, while the offshore economy may be substituting for Scotland’s better performance on paper, in practice this is probably not making up for the lost growth in the onshore economy. To see the true vulnerability Brexit is creating in the Scottish economy, therefore, its onshore performance needs to be observed.

These problems will only worsen as the onshore economy endures further pressure as the negotiations drag on, and when the event of the EU exist itself comes. The Fraser of Allender Institute previously forecasted negative growth rates of between 2 to 5.3 per cent across a spectrum of scenarios. A recent report published by The National Institute for Economic Research suggests that a customs union deal, of the kind Theresa May has negotiated with the EU, would cost Scotland 3.2 per cent in lost GDP growth, or £5.9 billion, by 2029. Business for Scotland’s own research estimates that a customs union deal with will increase Scotland’s unemployment rate by about 1.3 per cent, which as a percentage of Scotland’s working age population in 2017 is equivalent to 47,000 jobs.

The UK and Scotland Compared

Nonetheless, the Scottish onshore economy continues to demonstrate resilience in the midst of the profound political crisis that has been unfolding in recent years.

Looking at the UK economy as a whole, including oil and gas, its average quarterly growth rate from Quarter 1 of 1998 to Quarter 4 2015 was 0.5 per cent, thereafter (to Quarter 4 2018) it fell to an average of 0.4 per cent. Had the UK maintained the average growth rate before the political uncertainty began in relation to Europe, its economy would be £54.5 billion larger than it now is.

This amounts to £825 per person in the UK. As such, the UK economy has lost £202 per person more than the Scottish onshore economy has due to Brexit. 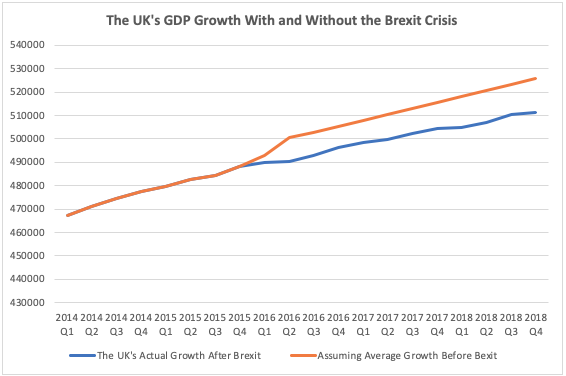 While Scotland’s onshore economy has been damaged significantly by Brexit already, the fact that – even excluding a bounce in offshore performance – it has proven more resilient than the UK economy is indicative of Scotland’s inherent strengths. It also demonstrates that North Sea revenues are indeed a bonus to, and not the core of, Scotland’s economic performance.

Most forecasts point to Scotland being harmed far more overall than the rest of the UK in every Brexit scenario. So, when the day the UK leaves the EU comes, the economic prospects of Scotland may become rapidly bleaker than they currently appear.