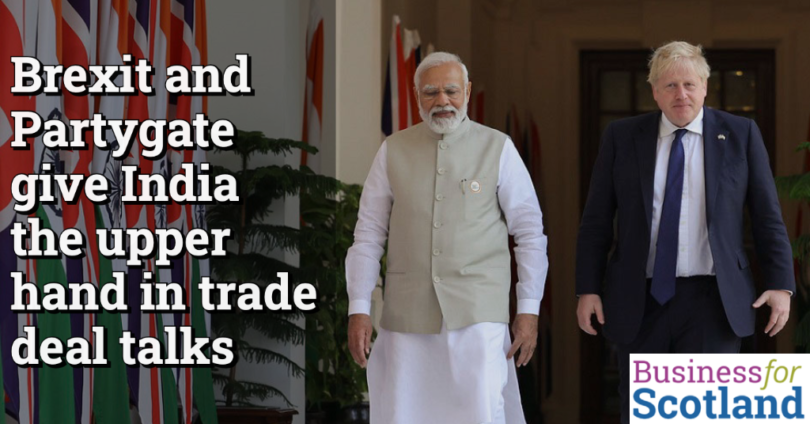 Boris Johnson’s newest catchphrase is “a Deal by Diwali” referring to his search for a free trade agreement with India before Diwali the five-day festival in October celebrating the victory of light over darkness, which is celebrated by Hindus around the world. Let’s hope it leads to a more successful outcome to his last catchphrase “Get Brexit Done”. We have our doubts.

As an EU member, the UK enjoyed trade deals with most of the world that were negotiated from a position of strength because the EU could offer access to a massive home market. Brexit meant the UK ripped up all of its trade deals and had to start from scratch with less negotiating power than before. Now under pressure at home, Boris Johnson needs a deal and therefore is weaker still. The deal that comes will not be that good for the UK and will mean Johnson has to open up the UK to higher levels of Indian immigration – so Brexit doesn’t even maintain the false illusion of taking back control of the UK’s borders that he promised to get Brexit done.

Johnson hasn’t had much to celebrate before his talks with India’s Prime Minister Narendra Modi, which at least took him as far as he could hope from the continuing Partygate scandal that has put his tenure under increasing pressure and which continued to dog him in New Delhi.

Among his hopes for the talks was something to boost UK exports of whisky, which is hugely popular in India. But it is subject to tariffs of 150 per cent and, although India is the world’s biggest whisky market, these taxes make it one of the world’s most expensive places to buy the genuine article and a country ripe for Scotch counterfeiters.

If you’ve ever been to India, you’ll be well aware of the shelves stacked with locally produced pale imitations of our Scotch for which you can pay just a couple of quid. In reality, our genuine whisky has only 2 per cent of the India market, a figure the Scotch Whisky Association is keen to increase.

According to SWA Chief Executive, Mark Kent: “Launching UK/India trade talks offers a golden opportunity to reach an ambitious tariff reduction in an early harvest deal that could grow Scotch Whisky exports to India by £1 billion over five years.

“Tackling the tariff and State level regulatory issues would open the market up to smaller producers who are effectively locked out by the substantial barriers to trade.”

“Improved market access for Scotch would enable an increasing number of Indian consumers to enjoy our premium product. It would also be good for our industry and Indian government tax revenues – a win-win for all.”

But what price would a beleaguered Johnson be prepared to pay to strike a deal with Modi?

The first thing likely to raise Home Secretary Priti Patel’s eyebrows is her boss having to concede the UK’s granting of more visas to skilled workers from India to cope with a shortage of “hundreds of thousands” of personnel, especially in IT and computer programming.

He told journalists in New Delhi: “There’s no question Indian skills can make a difference … I’m not going to be dogmatic in refusing people with skill and talent in coming to the UK.

“All I would say is we need to control it.”

Modi said more than 1.5m people of Indian origin were living in the UK, describing them as a “living bridge” between the two countries.

“We would like to see a further strengthening of this living bridge,” said Modi, adding that India also wanted improved access to the UK for its professional services sector.

Their horse trading continued with Johnson saying a free trade agreement between the two countries would also enable India to lift tariffs on British machinery in return for the UK doing likewise on Indian rice and textiles.

Of course there are hurdles to making migration simpler, as indicated in an online poll for Express.co.uk, which ran from 9am Thursday to 1pm on Friday. It asked readers if relaxing visa rules for highly skilled Indian migrants in exchange for a quicker, tariff-free trade deal was the right thing to do.

A total of 8,965 people voted and an overwhelming majority – 88 per cent – said immigration should not be increased. A further 11 per cent said “yes” and 1 per cent said they didn’t know.

Another sticking point could be India’s long-standing ties with Russia, from which it buys more than half of its military hardware.

India abstained from a UN vote condemning the invasion of Ukraine and has not imposed sanctions on Moscow. This is mainly because Russian military equipment is cheaper and therefore India buys more than half of its military hardware from them.

So, did Johnson ask India to join in on sanctioning Russia? Well, India’s Foreign Secretary Harsh Vardhan Shringla told reporters. “There was no pressure of any kind.” Thus, we see how weak the UK PM’s position really is.

Conclusion – An independent Scotland back in the EU with instant associate membership of the EU will have a better trade deal with India than Johnson will be able to negotiate from the UK’s position of weakness.