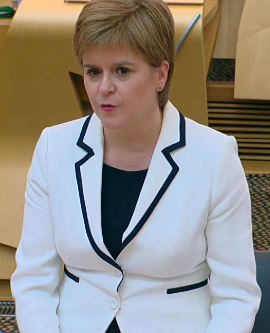 Nicola Sturgeon, the First Minister of Scotland, has today delivered a statement to the Scottish Parliament entitled ‘Brexit and Scotland’s Future.’

There was no chance that the FM was going to announce a date for a new Scottish independence referendum, but what most were hoping for was clarity on the path towards a second referendum and that is what we got.

Full details below, but first it is key that she led with a damning attack on Westminster’s performance on Brexit, stating that it was a tremendous “waste of time and money and that Westminster needs to take a no deal Brexit off the table” and that she “has sought a positive way forward on Brexit for the whole of the UK.”

Remember though, that all forms of Brexit are harder on Scotland than on the rest of the UK. We also have to consider that with the Brexit Party looking set to win the EU referendum in England, cancelling Brexit looks unlikely.

Let us be clear, power over the constitution is not devolved to Holyrood. So although the Scottish Government may well have the power to hold a referendum under its powers to collect data and statistics, such a move would see Westminster attempt to stop the referendum happening through the courts. At best that would create delays, at worst lead to any referendum being boycotted by the British nationalist parties and thus any result would not be binding on the UK Government to accept.

So the FM has always looked to manoeuvre Westminster into accepting Holyrood’s right and mandate to hold an independence referendum and for that referendum to have the same legal status as the 2014 plebiscite did. This requires a Section 30 order, the temporary transfer of powers over the constitution to Holyrood, to make the result binding on Westminster and avoid a Catalonia-style situation.

In 2014 a clear message of the British nationalist politicians was that a vote for independence was a vote to leave the EU. Now the opposite appears to be true. This has created a material change in circumstances and so the prospect of a second independence vote looms large. The independence-supporting majority in the Scottish Parliament creates a mandate for that.

Independence in the EU is the official position of the SNP. The most beneficial relationship that Scotland can have with both the EU and the UK after independence is that both stay in the Single Market and Customs Union.

Brexit might not happen. There could be a Customs Union or even a deal to keep the UK in the Single Market. Theresa May will probably not be the PM when any independence vote takes place and there may even be a snap UK general election. All of these issues necessitate that the Scottish FM waits for clarity on Brexit, because only clarity on Brexit allows the people of Scotland to begin to reconsider their position on independence with all the facts.

What really matters is that today Nicola Sturgeon confirmed her intention to hold another independence referendum, possibly within the term of this parliament. Of course, Brexit and arguments over the power to hold a new referendum may cause delays but the direction has been set.

A new choice of independence needs to be offered in response to Brexit. With a mandate from the last Scottish elections and a mandate from the Scottish Parliament, timing is the key issue.  If Scotland is taken out of the EU there will be a referendum in the lifetime of this parliament, i.e before May 6th 2021.

Three steps were outlined
1) The Scottish Government will introduce primary legislation to set out details on how the referendum would work – a Section 30 order will be demanded by the Scottish Parliament at the right time.
2) Mike Russell will engage opposition politicians on what extra powers are needed to protect services, budgets, the economy and grow our population.
3) A Citizens Assembly will be formed to address the challenges of Brexit and inform choices on the constitutional future of the country.

Points 2 and 3 above are clearly aimed at demonstrating that the British nationalist parties either don’t want more powers to protect Scotland or that they do and therefore force them to admit that the status quo is broken and that undermines the case for the Union.

At BfS we are getting ready to help make this happen with our campaign Believe in Scotland and our Scotianomics policy work. To help make independence a reality the independence movement needs to start campaigning now so that it lays the foundations for increasing support when clarity on Brexit opens the flood gates.

Westminster will reject Nicola Sturgeon’s plans but saying no to Scotland and disadvantaging Scotland is what they like to do and the Scottish FM knows it – the game is afoot.

“The Scottish Greens have always believed that Scotland’s future should be in Scotland’s hands, as an independent nation at the heart of Europe. The Brexit shambles has only confirmed our belief that we would be far better governing ourselves. So we welcome the First Minister’s statement today.

So the pro-independence majority in Holyrood are clearly in agreement.