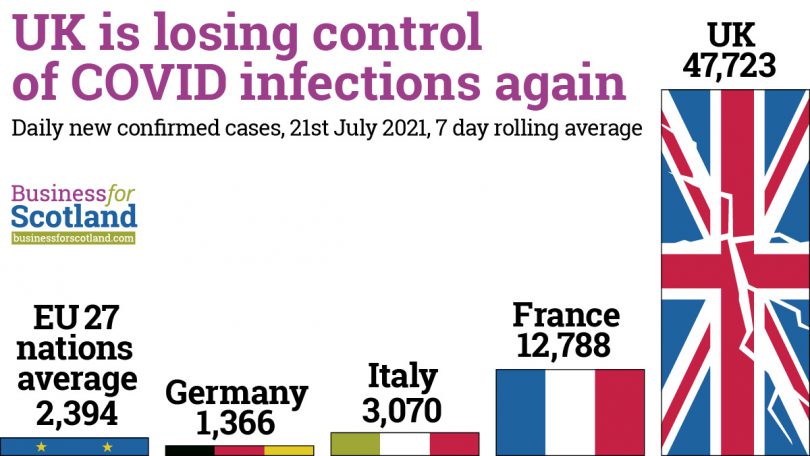 Sure there are some smaller nations in the EU, so let’s look at those of similar population size to the UK at 66.5 million:

Together they have three times the UK’s population, but the UK – an island that supposedly now has control of its borders – has almost three times their combined cases. Even the incompetence we have come to expect from the UK Government doesn’t explain this anomaly. Johnson’s government’s plan is deliberate, it has always been to seek herd immunity as soon as the people will accept it. 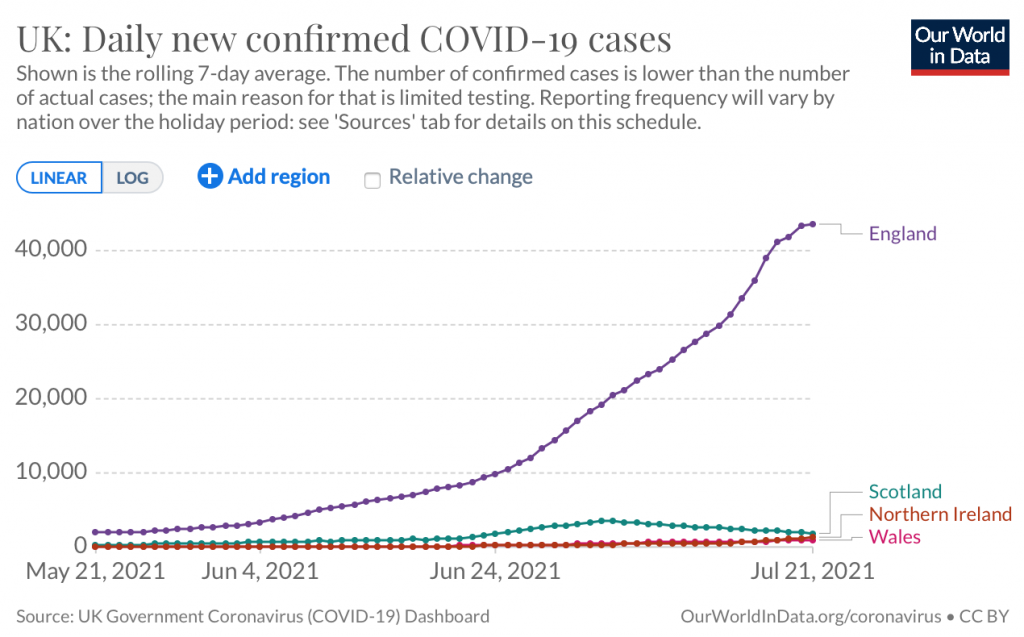 The UK government has always cared more about the economy than people and it judges success on the wealth of the FTSE 100, not the wellbeing of the nation. So the question is; if we can truly build back better to redesign our economic approach to add resilience to economic, healthcare and environmental shocks, how do we get the economy going again regardless of the cost?

Ironically, the cost of reopening too soon and having to go back into lockdown is massively higher than reopening in a slow, measured way. The problem is the UK government’s inability to act strategically; it isn’t willing to wait for the correct approach, even though we have been here before and would already have been mostly back to normal. Its unbridled populism doesn’t allow for caution or even empathy or intelligence.

In Scotland, the government and its people are pivoting towards a wellbeing approach to economics and society, the UK government is pivoting towards disaster capitalism. In terms of economic and social values, a chasm is opening up between Scotland and England that can’t be bridged.

A second independence referendum will happen probably after Autumn 2022 but no later than Autumn 2023 and the question will seem less like: “Do you think Scotland should be an independent nation?” and more like: “Do you really think running our own affairs is scarier than being ruled by a UK government that doesn’t care if you live or die?”

More than a year ago I started an article with the claim: “It’s quite extreme to claim the UK government is deliberately following a policy that will kill potentially tens of thousands of its people, however, all the evidence points that way and it has to be called out”. Doesn’t seem so extreme now.

I also wrote: “If coronavirus doesn’t start super spreading again then it will be down to luck, not UK Government policy.” Well, the figures show that we were never going to be that lucky.

Most people have been vaccinated now and fewer people will die, so the argument goes. True, vaccinated individuals are less likely to have severe symptoms, be hospitalised and die – but it’s not guaranteed. Opening up with cases this high and the Delta variant so prevalent, people will die. Not usually the fit 45-year-old but those with suppressed immune systems, especially cancer sufferers, and by allowing the virus to stick around in such volumes the risk of a mutation that is impervious to vaccination is significantly heightened. The UK risks becoming the typhoid Mary of the coronavirus pandemic.

Herd immunity has always been the strategy, however, extremely high instances of Post Viral Chronic Fatigue – long COVID – will create a health crisis if the herd is infected over and over again.

As a sufferer of PVCF I can assure you that Long Covid is no joke; I went from cycling 30k to “tak ma doon”, one of Scotland’s toughest hills, cycling up it three times as a training exercise (I was planning to ride the NC 500) and then 30k home at 30k per hour, to having to ask my son to go on 1k walks with me in case I needed help getting home. I have put on 1.5 stone, had to give up cycling, Thai boxing training and hockey.

Even now, a year later, I feel proud to have managed 18 holes of golf, I will recover fully but others wont. I write articles and think for a living, but if I was a plumber, a truck driver or a nurse I would have needed at least six months off work. Even if your Covid symptoms are mild, it can sit on you for months like lead weights on your shoulders. Herd immunity comes at a cost – we just don’t know how much yet.

Boris Johnson is PM for one reason only – Brexit – and Brexit has failed completely. Unless he reopens the economy and uses the pandemic as cover for the abject disaster that Brexit is, then he will be deemed a failure by those that voted for him.

Boris Johnson would not blink an eye at the prospect of sacrificing lives nor risking a long covid health crisis to save his legacy – how is he going to be able to charge £30,000 a night when he leaves office giving after-dinner speeches to the big corporates whose bidding he is doing if his reputation is so obviously destroyed?

Reopening now is unwise in the extreme, and it is not necessary, the UK Treasury (via the Bank of England) can create new money during a global crisis without the potential damage of uncontrolled money supply in normal times – because everyone else is doing it. It has created hundreds of billions and that will never need to be paid back and the UK Government needs to use that ability to offer more support for businesses, extend the furlough scheme to those that need it and offer grants to restock and reopen at the right time – especially to the hospitality industry. Instead, we will get turbocharged austerity and disaster capitalism style reforms aimed at turning the UK into an ultra neo-conservative utopia an oxymoronic plan if ever there was one.. It won’t work for the majority – but the UK Government doesn’t even care if you live or die so why would it care about building a better society with a resilient sustainable economy where businesses and the people can thrive.