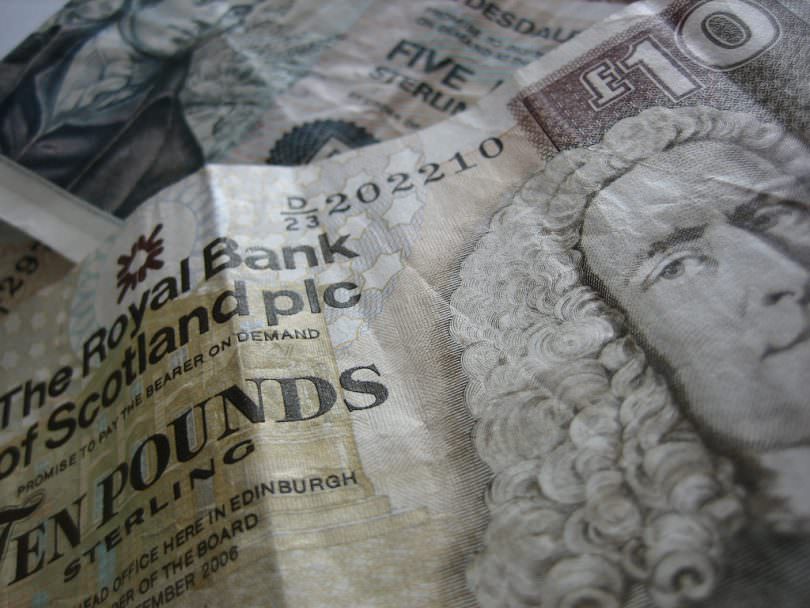 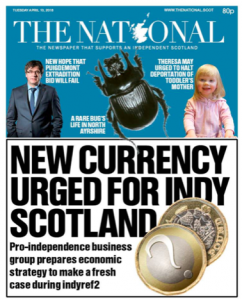 Prior to the Sustainable Growth Commission report being published, BfS issued our currency position which was covered on the front page of The National and we haven’t changed our position.

We believe that an independent Scotland should have a sovereign currency at the time most in line with the economic and social wellbeing of the nation.  That time might be right away, it depends on the political realities of the day, but it’s probably after a transitional period where Scotland uses sterling, until it suits us not to do so.

The truth is that an independent Scotland has many currency solutions open to it that would all work perfectly well.  Each has benefits and each has drawbacks. However, they all share one simple fact in common. Any currency option combined with independence will be significantly better for the people of Scotland than remaining in the UK.

Scotland is one of the world’s most naturally wealthy nations, it is a manufacturing powerhouse, a leading exporter, has innovative cutting edge industries and a highly educated workforce. All it lacks are the powers to create bespoke economic and social policies to maximise and then share the benefits derived from those significant economic advantages more widely amongst its people, rather than providing hidden subsidies to the failing UK economy.

Business for Scotland gave evidence on multiple occasions to the Sustainable Growth Commission (SGC) and they appeared to agree with most, if not all, of our more conservative ideas but adopted none of our more ambitious ones.  We do not agree that there would be a deficit that needs reducing in an independent Scotland, as the right policies will generate significant economic growth. We did not complain about the SGC report when it came out for three reasons:

BfS will be arguing for a different economic prospectus to the SNP anyway. If you want to be more Scandinavian than British there is nothing wrong with a smorgasbord approach to independence and the Greens in particular will play a larger role this time arround.

Let the SNP make their case, let the left make theirs, the Greens theirs and pluralists like myself will seek to influence any post-independence Government of any colour to think more about a new, more ambitious approach to economic prosperity.  A more progressive approach that can probably only be adopted by the conservatives in society after independence has raised the consciousness and confidence of the nation.

BfS wants independence in order to make the case for the policies we believe will lead to a fairer, greener, healthier, happier and wealthier nation than we can ever achieve within the UK – it’s a means to an end to us.

So the question is what currency option should an independent Scotland adopt?

No set timescales, no dogmatic adherence to instant new currency because it’s the nationalist thing to do, let’s just make sure that when it works in our favour we can launch the currency and thrive. Flexibility is key in this approach, the Scottish Parliament should have the power to make the change when the time is right and that means that the SNP’s six tests are not flexible enough.

If the independence negotiations go a certain way, then we also have to accept that ASAP is the answer to when we launch the sovereign currency.

The SNP is a broad church, it’s achievements have been gained through gradualism. It is not about to change its spots and adopt radical policies that undecided and persuadable voters will not buy in indyref 2.

An independent Scotland and the rUK will still want to trade with one another after independence and if Brexit goes ahead then the currency solution that is best for Scotland may change, even dependent on the type of Brexit that is delivered. A no deal Brexit would make the credit crunch look like a good year for the banks and sink the pound. A sterlingised Scotland would be the only place the UK economy could afford to buy from.  Add to that if we were using the pound our high-value food and drink exports would soar.

That’s just one of a dozen scenarios we need to be ready for.  Any stance that doesn’t offer the flexibility to take advantage of any scenario is dangerously limited and so, although it’s not perfect, I hope the SNP’s revised stance is adopted by the SNP conference this weekend.

Then, before the final economic prospectus is published hopefully the SNP will have added more flexibility on the currency. All currency positions will be unfairly attacked as unworkable by unionists in the next referendum and so the statement that we will use the pound to begin with but be flexible and do what’s best for Scotland is also the best promise to make on currency.

Indy Scotland ‘should unshackle itself from the pound’

During the 2014 referendum BfS stated that there were multiple currency options available to an independent Scotland but backed the currency union plan, with many caveats.  At that time sterling was strong, stable and Brexit had not been voted for, Sterling was therefore an ideal candidate for a currency union.  Now sterling is volatile, vulnerable and weak and is no longer an ideal candidate for a currency union.  Flexibility on currency is now the key factor as the UK Government’s ability to help create economic stability has been destroyed by Brexit and its inability to manage it properly.