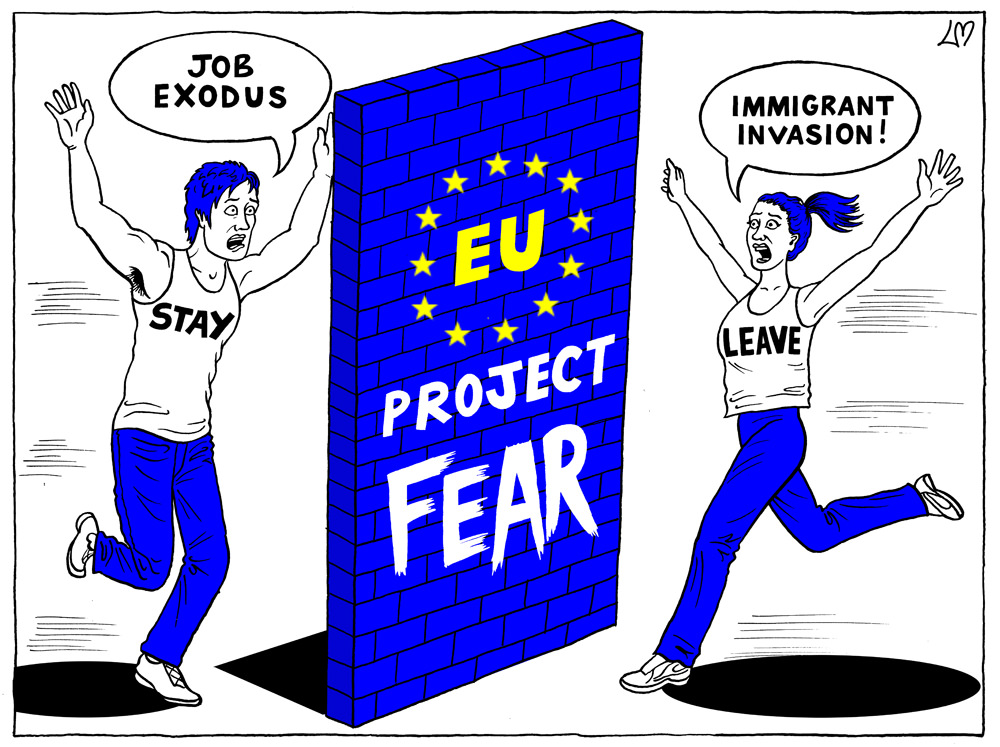 Both EU campaigns running negative – will just leave everyone negative about the EU.

AS THE EU referendum looms close it’s plain to see that the British nationalist movement that wants to withdraw from Europe is a negative one underpinned by mistrust of foreigners and a belief in the splendid isolation of the UK. Unfortunately the Stay Campaign also seems set on running a negative scare story led campaign and with both campaigns going negative it might just leave everyone just feeling negative about the EU. Already both David Cameron for Stay and Ian Duncan Smith for Leave have claimed that if you don’t vote their way we will be more likely to suffer a Paris style terrorist attack.  Unethical intelligence insulting positions that sum up Westminster politics. if we want to be less susceptible to Paris style attacks a better strategy might be to stop bombing and invading the Middle East for economic reasons.

All of this contrasts starkly with the civic and international outlook of the national movement in Scotland, which was in fact a positive campaign for full self-determination within a UK and EU trading block. Ukip define independence as no other nation having any influence over your parliament but the fact that sort of independence (separatism) hasn’t been viable for thirty years shows just how backwards Ukip thinking is.

Modern independence involves a sharing of sovereignty with your neighbours and trading partners, recognising the inescapable interdependence driven by international trade and protecting global economic wellbeing. Independence for a nation state no longer means separation and isolation, but that is how the Leave Campaign sees it.

Boris Johnson, Mayor of London, gives his support to the Leave Campaign

The worry with an early referendum is that there will not be enough time to co-ordinate, and educate and inform the public on the disparate, complex but hugely positive impact of the EU on our economy, infrastructure, working conditions and even basic human rights. Cameron’s preference for an early referendum will mean that the Stay campaign will only have time to deploy one campaign tactic and that is to scare voters into staying.  This had a better chance of working before Boris Johnson threw his hat in the ring for Leave which although eminently predictable does give the Leave campaign credibility as he will likely be the UK’s next PM.

EU Project Fear will claim that millions of British jobs depend on the EU, that billions in trade would be threatened, that EU tourism will dip and cost jobs, that uncertainty will stop inward investment and someone will probably say that Russia will invade, we have already heard that terrorism could rise in our cities. People in Scotland have heard it all before but it’s a new scale of fear-mongering to voters in the rest of the UK, and it is exactly the sort of campaign that the status quo rolls out whenever it is threatened.

The problem is that although that tactic worked in 2014, after it lost ground for months to the more positive Yes campaign, No started near 70% and only managed to cling on by its fingernails in the end. The dynamics of the EU referendum will be radically different both because the polls can’t pick a winner in England and because the Leave Campaign is also going to run a negative (borderline racist) anti-immigration campaign. Cameron is running a significant risk of losing to the Leave Campaign by campaigning on fear and negativity rather than providing a detailed, positive set of case studies on the benefits of EU membership.

Cameron wants to beat the anti-immigration lobby by pointing out that he is getting tough on immigration and has negotiated opt-outs on paying benefits to immigrants. That won’t work, as everyone can see the opt-outs he has negotiated from the EU are pretty worthless.

A better way to beat the anti-immigration argument is to point out that without EU immigration our NHS would run out of nurses; to ask without Romanian and Polish care home workers, who would look after our old and infirm? They do those jobs as Scots won’t do them for the below-living-wage remuneration that care homes are contracted to pay by local councils. How would we fill the skills gaps in the building sector without Polish builders and how does Scotland generate a younger demographic without attracting young, hard-working families to come here to live and work? You could point out that EU immigrants generate 45 per cent more income tax revenues than British people do over their lifetimes, or that 2.2m UK citizens live in the rest of the EU, which is more than the number of EU citizens living here.

Cameron’s concessions don’t empower the UK in Europe they simply show that the UK wants to be a second-class EU citizen, an uncommitted hanger-on sort of friend that never seems to be willing to buy a round and not one that influences the direction of the group. Vote to stay and because of the lack of commitment and involvement with the EU the UK will find itself isolated and powerless. Maybe the European Parliament will stop the UK voting on issues that it has an opt-out on, a sort of European Votes for European Laws initiative.

Vote to leave and there will be problems, but they won’t be insurmountable, unless the UK Government does the unthinkable and fails to do a trade deal / retain access to the single market and customs union. On the Andrew Marr show Nigel Farage gave an example that most Scots will see as dripping in irony when he said. “People say the UK is too small and needs the size of the EU but Iceland with a population of 500,000 managed to sign trade deals with China so why can’t we?”.  With he right deal there will be disruption and uncertainty but once again nothing that can’t be dealt with. This was also true of Scotland’s independence vote. The upside in 2014 was that all the powers needed to address the problems and grow our economy would be in Scottish hands, the small risk had a huge upside that meant there was nothing to fear but a lot to hope for. However, with a Brexit, all the powers go to Westminster and a Tory majority government will have to decide whether to match or undercut EU maternity leave rules, whether or not EU holiday entitlements and working rights protected by the Working Time Directive should be reinstated, or if removing those protections would make the UK economy more competitive, there is only a huge downside from Brexit for Scotland .

The Conservatives have already said that they don’t like the EU take on human rights for all citizens and if we leave the EU the barriers to dropping the European Convention on Human rights will have been removed. Will they keep TUPE laws that protect people whose jobs are outsourced, or seek to hit agreed EU emissions targets while cutting grant support for onshore wind-power? Any Scot who votes to leave the EU is voting for the majority Conservative Government (with only one Scottish MP) to have the final say on whether to keep so many of the fundamental EU workers rights that protect people.

It frustrates me when I see members of the Scottish left raging against the EU when leaving would mean betting the house on the Conservatives in Westminster being willing to look after Scotland and its workers when their track record shows they are the very picture of a distant, disinterested and dysfunctional government. Jim Sillars wanting to put all of the UK’s employment law powers in the Westminster basket under a majority Tory Government seems tactically naive at best – if that happens it will the the Tories that dish out the day of reckoning!  But what about TTIP cry the left? Yes, it’s a stinker of a deal in many ways but David Cameron is one of its champions and he will sign it whether we are in the EU or not.

Financially, the EU also works in Scotland’s favour, it charges the UK for membership but then gives some of that money back in the form of grants to support Scottish Government spending, such as The European Regional Development Fund and European Social Fund programmes to encourage investing in smart, sustainable and inclusive growth activity across Scotland. Those funds have more than €900 million (£697m) allocated for spending over six years.

Regional Selective Assistance (RSA) grants are also available to help companies directly investing in rural areas and economically challenged towns, so Scotland’s rural communities and poorest urban communities see the positive role of the EU in redistributing wealth away from London and the South East. After a Brexit, how can people in Scotland trust the UK Government to replace those EU grants and help us build bridges, maintain roads, enhance broadband and invest in skills and industrial infrastructure when they are the self-same government trying to cut our budget by £3 billion as part of the new Scotland Bill deal.