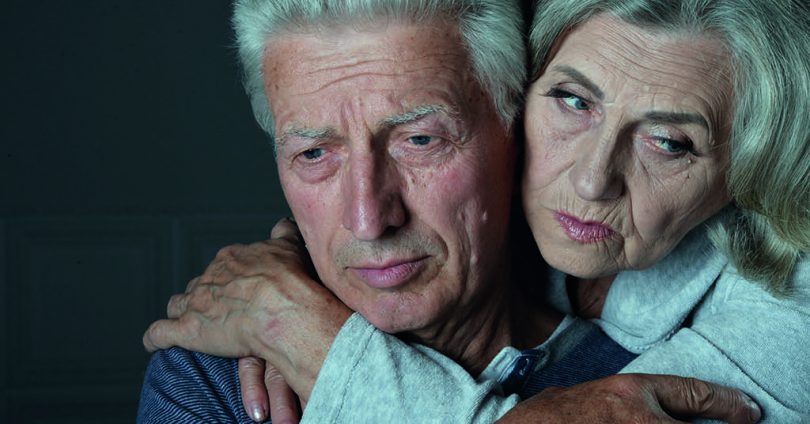 It’s almost impossible to believe today that so many Scots were duped by Better Together’s Project Fear tactics warning that a Yes vote in the 2014 independence referendum would threaten Scottish pensions.

On Thursday morning we saw incontrovertible evidence proving that it is remaining part of a dysfunctional Union that is leaving pensioners poorer and that it is independence which offers them real hope of a better life.

That same morning it became clear exactly why Boris Johnson broke an explicit Tory promise not to break the triple lock on pensions. By doing so he robbed every pensioner of up to £500 a year.

It was revealed UK pensions are set to rise by 3.1% next year, in line with the Consumer Price Index measure of inflation. Had the UK government kept the triple lock in place as they promised pensions would be rising by up to 8.35%.

The government says it can’t afford to pay. Nonsense. Its insistence on paying out only the smaller pension rise is a political decision rather than a financial one

The Tory-supporting Daily Telegraph yesterday described the correct 8.35% pension rise as ‘’astronomical’’ . The government says it simply cannot afford to pay it. Both statements are nonsense. 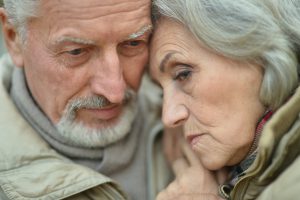 An 8.35% rise would look almost insignificant next to the  massive rises in power prices which are due to hit as winter arrives.

A low state pension encourages those who can afford it to buy a personal pension, which helps the friends of the Tory party in the City of London’s financial world.

The Prime Minister tricked the country when the Conservative 2019 election manifesto promised the party would not break the triple lock on pensions if elected. He’s torn up that promise, just as his party tore up the Brexit agreement it negotiated with Europe.

His argument that the pandemic has ‘distorted’ wage rises is nonsense. Wages have risen because the pandemic made that necessary. It has made higher pensions necessary too.

In fact there is an argument that pensions should rise even more to allow many of the most vulnerable people in society to cope with huge domestic power price rises which are due to kick in just as winter arrives.

Thousands of customers were simply ditched by power companies after being advised by experts and Tory politicians to shop around for the best deals on the market. When fuel prices recently surged many of these power companies could not sustain the deals they had been offering and were forced out of business.

Their customers have been transferred to other operators and many are still waiting to learn how much they will be charged. A government price cap currently remains in place but for how long? The Scottish Power boss has already suggested the price cap should be abolished and the present UK government’s record hardly inspires confidence that it will resist such pressure.

Consumers’ present plight is entirely the result of free marketeers’ obsession with competition, which inspired them to encourage a plethora of new companies to enter the marketplace. Now that has proved a disaster the victims are consumers– including pensioners – who now face huge price rises which could soar higher still.

It’s enraging to remember that the pro-Union side in 2014  claimed that a Yes vote would put pensions in Scotland at risk. Those devious Project Fear tactics are still being rolled out today. Pro-Union campaigners disingenuously claim that now is not the right time to hold an independence referendum while we should be ‘’focussing on the pandemic recovery’’.

They seem to believe they can convince people that independence would create uncertainty and chaos. Have they looked at the present state of the post-Brexit UK?

Supermarket shelves have been stripped of food supplies, a lorry drivers’ shortage is continuing to disrupt supply chains, hotels and restaurants are having to limit opening hours because they simply cannot find staff and even Christmas looks to be under threat. Britain could hardly be more chaotic and could hardly offer less certainty. 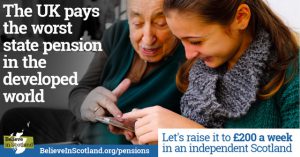 Independence, on the other hand, offers the opportunity to recalibrate the economy to benefit the Scottish people rather than the bank balances of an already wealthy elite. Believe in Scotland has put together proposals for a wellbeing manifesto. As part of that it is campaigning to raise the state pension to £200 a week as a first step to giving our pensioners a better life.

Believe in Scotland founder Gordon MacIntyre-Kemp says the organisation has calculated that pensioners require a bare minimum of £200 a week to live with dignity in Scotland.  He says: ‘’Below that £200 figure carers and those who have experienced illness, disability or periods of unemployment, or who are just extremely low paid and don’t have private pensions, cannot be sure of being able to properly feed or clothe themselves or even heat their houses.

‘’That is why we are insisting that on day one of an independent Scotland the basic state pension for everyone should be £200 a week – we can’t afford not to.’’

The choice for Scotland is becoming increasingly clear. We can remain within a seriously malfunctioning United Kingdom which treats its citizens with disdain and cruelty, puts its most vulnerable at risk, breaks promises with impunity, tears up agreements with former international partners, lurches from one self-inflicted disaster to another and seeks to recreate an economy which helps its rich friends at the expense of everyone else.

Or we can demand the right to take our future in our own hands, decide our priorities for ourselves, restructure our economy to promote the wellbeing of our people and improve the living standards of our pensioners. It becomes more obvious which is the better choice with every passing day.