The BBC as the state broadcaster should set the standard in impartial and factual reporting of election results, but in the case of the Scottish Local Council elections it has failed on both counts.

The media narrative on the results has almost unanimously been that the Conservatives have done well and that the SNP lost seats, and so given that the Conservatives campaigned on a platform of ‘say no to a second independence referendum’ that means that the Scottish people don’t want another referendum.  This narrative has largely been driven by the BBC election results posted on their website and broadcast on the election programmes.

There is, however, a slight problem with that narrative – it is completely untrue.

As you can see, the SNP increased its number of councillors by 7 and the Greens by 5, meaning the pro independence parties increased their number of elected councillors by 12 (according to BBC figures). However, our screen grab from (right) the BBC 2017 results page shows the SNP as having lost 7 local councillors.  This is patently not true and the parties /candidates that are not standing on a pro -independence platform have in fact lost a combined total of 4 seats.

The Conservatives have done extremely well in triangulating the No vote and have therefore essentially stolen No voters largely from Labour, from the independents and even a few from the Lib Dems who were already at bedrock levels of councillors anyway and not likely to lose any more. 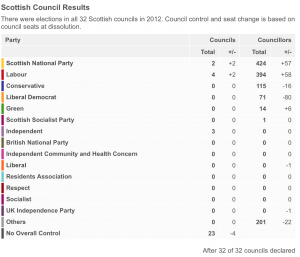 In other words, although the SNP and the Greens largely fought this election on local issues, the Conservatives tried to make it a pseudo referendum on having another Scottish referendum and the result is clear: the Pro independence parties increased their councillor numbers by 12 and their opponents lost 4. More startling is the difference in the lead that the SNP has in councillor numbers over the second placed party.  In 2012 the SNP won that election with 424 councillors when compared to Labour in second place with 394 – a win by 30 councillors. Whereas in 2017 the SNP won the election with 431 councillors, a win over second placed Conservatives by 155 councillors.

This is an unprecedented change in the balance of power meaning that unless the Tories and Labour are willing to team up across Scotland the SNP will be in a position to be the lead group in most councils and certainly in every major city (often in partnership with the Greens).  Were the SNP to be blocked from council leadership by Tory/Lab pacts the silver lining for the SNP is that they would have a big stick to beat Labour over the head with in the June General election, by saying “A vote for Labour is a vote for Theresa May”.

I also listed the seats contested as a sum of the results reported in both years by the BBC and as you can see by the BBC numbers there would seem to be an additional 8 council seats up for grabs in 2017 compared to 2012, following changes made by the Boundary Commission. On analysing these boundary changes, the BBC has guessed that they would have meant that the SNP would have won 14 more seats than they actually did in 2012 and so they believe that winning 431 seats means that the SNP has lost 7 seats and not won 7 more.  This is nonsense and totally non factual – it would have been appropriate to state that the boundary changes may have favoured the SNP but not to state clearly the incorrect analysis that the SNP had lost 7 seats when they had not. We are not making a political party related statement here but as a leading independence campaign supporting body BfS sees the BBC’s misreporting as impacting negatively on the the independence campaign.

In this case, the BBC has failed in its duty to represent a factual analysis but also on providing incorrect data that it must have known would change the narrative of the immediate reporting of the results. Headlines such as The Telegraph’s “Ruth Davidson hails ‘fight back’ after Scottish Tory council surge” and claims of a “voter backlash against indyref” flow from that misleading results statement, but the Daily Record’s: “They’re back: Tories invade Scotland after sweeping local elections”, may well only serve to send a message to Labour voters that they can’t tactically switch to Conservative in the General Election without  increasing Theresa May’s majority over Labour at Westminster.  Labour’s response to the Local elections from Kezia Dugdale was “send Nicola Sturgeon a message” and reject a referendum on June the 8th, word for word the same pledge made by Ruth Davidson before the council elections. So Labour seem more intent on winning switchers back from the Tories than anything else on June 8th and tactical switching may not be as large as the Tories hope. 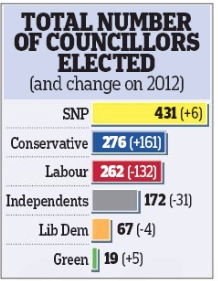 Edit Tue May 9th – there have been a few comments asking for proof that other media outlets have reported it differently, so here is a photo from the Daily Mail (print version) who would not complain about being called anti-independence.   The Mail and others have now started to report the BBC figures. The Herald, the Scotsman, the Sun and the Express all reported SNP gaining seats.

You may also like: The curious case of the pound that went up in the fight