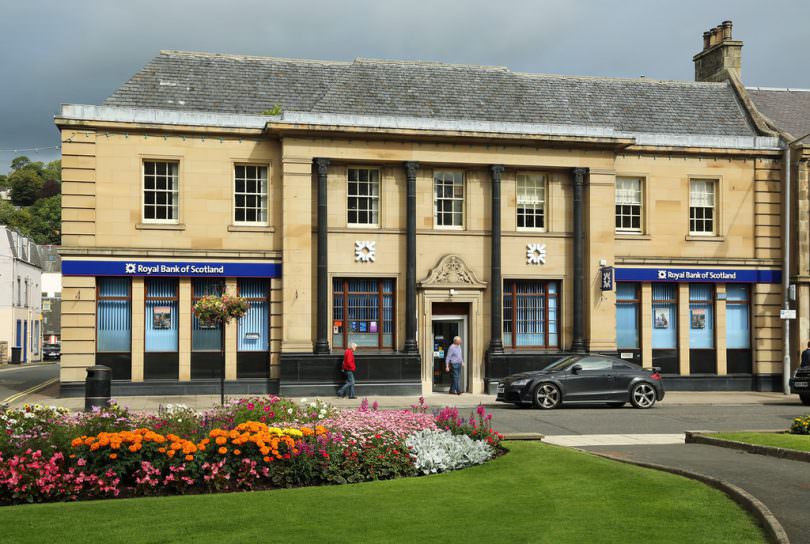 Scotland has lost more than a third of its bank branches since 2010, from 1,625 in 2010 to 975 in 2019, according to data published by the Office of National Statistics (ONS). Local bank closures is a UK-wide issue that can be seen as an unavoidable consequence of moving towards an age of digital banking. However, it is a problem that affects local communities in Scotland by making everyday transactions, for businesses and individuals, much harder. 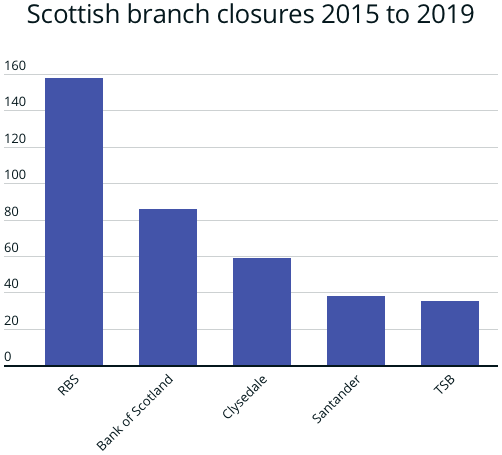 In addition, the number of ATMs or cash machines has been following the same trend of constantly falling in the past ten years or so. There are now, in Scotland, 10.8 ATMs per 10,000 residents. This is higher than any other region in the UK, and greater than the overall UK average of 9.2. In November 2019, there were 5,896 ATMs in Scotland, 4.2% less than in July 2018.

The most common excuse for closure is the digitalisation of the banking sector and the increasing popularity of internet and mobile banking. The ‘decline in the use of cash, the decline in the use of cheques,’ and the fact that fewer people choose to pay or be paid in cash. For instance, according to LINK, the UK’s largest cash machine network, cash withdrawals in the UK have been falling since 2016, as the following diagram shows. 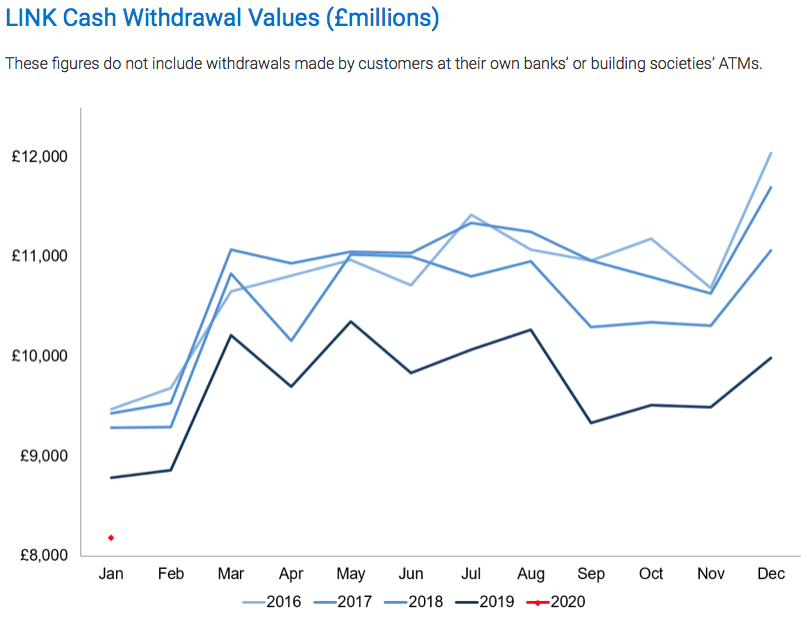 Despite the fact that alternative ways of banking have become available through the changes in the sector, branch closures have already had an impact that is felt mostly ‘in rural areas and places where no viable alternative exists.’ Apart from providing an important service, bank branches in rural areas also play a role in community cohesion. Moreover, ‘many customers value face-to-face services and some people are unable to access online alternatives.’

Research conducted by Business for Scotland (BfS) in 2018, found that 96%, of the people that participated, saw bank closures as something that would have a negative impact on their businesses in the future.3 For instance, almost 21% of respondents said that they now had to travel an additional 15 minutes to 1 hour to access banking facilities, while 9% said that the closures had extended their travels by an additional 1-2 hours. Almost 21% of the business owners said that they do not have a bank nearby to lodge their daily takings in. Meanwhile, 15% stated said that the bank closures have had a negative impact on their customers as there were now fewer, or no, nearby ATMs available for cash withdrawals. 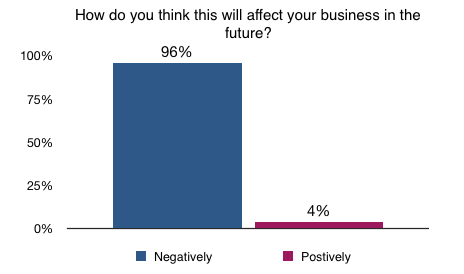 As a result of the bank closures, 21% of the respondents said that they now would have limited access to business support and advice, while more than half (52%) stated that local bank closures had affected their business negatively. In other words, the bank closures have already created a shortage of providers of consumer financial services to individuals and businesses. Even if these services are also provided by building societies, as well as by the Post Office, it seems that it has not been possible to cover the gap in services especially for SMEs, the residents of rural areas, and vulnerable groups such as the elderly and the disabled.

The British Banker’s Association (BBA), by acknowledging the problem, announced the following recommendations on how to deal with a branch closure in order to minimise the impact it has on the public and businesses. So, according to the BBA the banks should:

It is difficult to say whether these recommendations, made by the BBA, will actually help those affected. It is quite clear though that the BBA anticipates bank branches closures to continue. The people that participated in BfS’s survey suggested that there should be at least one bank in a town and that banks could share premises with other banks or the post office to keep their costs down. Many of them also called the Scottish government to take action to ensure the replacement of the services that are being removed, especially in rural areas.

In response to that, BfS has already recommended to the Scottish government that  ‘Local banking hubs’ are created where individuals can process cash and gain access to banking services for multiple bank brands. With regards to rural areas in particular, BfS has pointed out the possibility that publicly owned banks should be required to provide a certain level of consumer financial services. All in all, local bank closures is an issue that needs to be addressed and the proposals presented here should at least be investigated as they provide potential solutions to an ongoing problem.