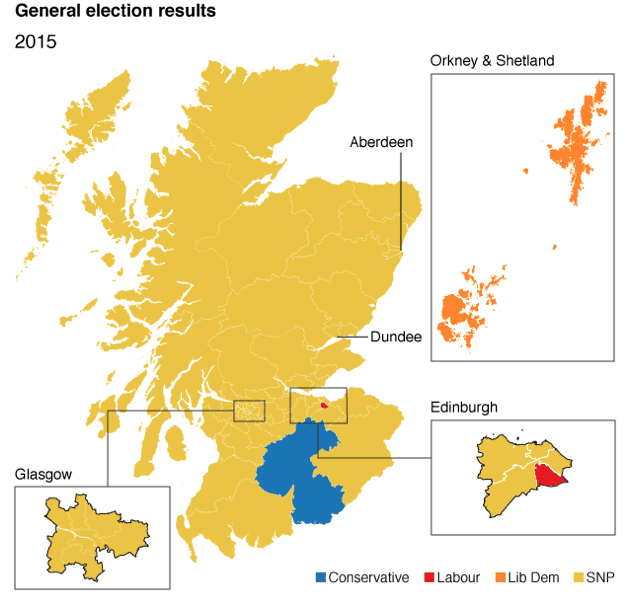 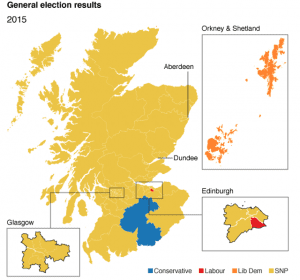 A bad night for the union?

For months Nicola Sturgeon has been saying that there won’t be a 2016 manifesto pledge for another referendum unless there is a material change in circumstances. Last night’s result opened the door to that material change.

There will be an in/out referendum on EU membership for the UK. Assuming the polls are right (now a bigger caveat than it used to be) and also factoring in the percentage share of vote (if not seats) won by Ukip then it looks likely that Scotland will vote Yes and also highly probable that the rest of the UK will vote No to EU membership.  This will result in Scotland being forced out of the EU against its wishes and that would create a UK that is fundamentally different to the one to which the No vote committed us.

For the record Business for Scotland members, when polled, were 99% pro European and our AGM voted unanimously to campaign to stay in the EU if such a poll was called. We will do everything in our power to deliver a vote that maintains Scotland’s EU membership. An EU exit would create an economic crisis in the rest of the UK, so although it would in my estimation result in independence for Scotland it is not an ideal situation and we hope the rest of the UK joins us in maintaining membership.

Not that good for the Tories!

The media seem to think that that there were two great victories last night but the truth is the only great victory was that of the SNP.  The Tories are set to govern with a significantly reduced majority compared to the Con Dem coalition which had 358; now they will be expected to govern with 328 (est).  Sure Cameron could bring in the DUP and sole Ukip MP, but firstly there just are not enough and secondly dealing with the DUP whilst ignoring the SNP’s 56 would create a constitutional crisis.  If I were Cameron I would call Scotland’s FM this afternoon and offer home rule/Devo Max including full or near full fiscal responsibility in return for having less voting rights in Westminster.  There is a case  for English Votes for English Laws if, and only if, the powers given to Scotland are substantial and Smith just isn’t substantial enough to accept EVEL in any form. Cameron has a chance to delay independence but only if he is brave and emissive and offers far more powers than are currently on offer. Given Septembers referendum result it would be only right and proper for the SNP to accept Devo Max if it was offered but the devil is in the detail.

Half of my career has been in economics and half in marketing. Probably as a result, the two things that really annoy me are economic illiteracy and bad marketing and we have had plenty of both from the Westminster parties in this election. Labour in particular ran a disastrous marketing campaign and not just in Scotland; across the UK they have no one left to blame but themselves. 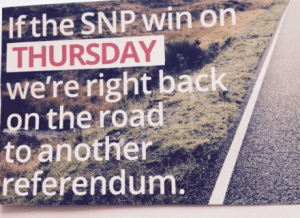 There were fundamental flaws in Labour’s Scottish message throughout. They started off trying to win back the masses of traditional Labour voters who votes YES in the referendum, with Jim Murphy shamefacedly declaring he wasn’t a Unionist and announcing that their slogan would be “Yes for Labour” (see what they did?). That tactic having failed to move the polls, they tried everything inbetween and ended up mailing everyone in Glasgow a warning that: “If the SNP win on Thursday we’re right back on the road to another referendum” – the exact opposite of where they started and something that not one Yes voting Labour supporter feared. You almost wonder if it was aimed at getting Tories to vote tactically. All that those disaffected Labour voters needed to push them further away from Labour was Miliband’s mishandling of the potential to deal with the SNP, making it look like Labour was disrespectful of the Scottish electorate.  Had Milliband stood up for Scotland’s right to elect who they wanted and adopted a proper, believable anti-austerity stance there is a chance he would now have a majority and a bunch (small bunch) of seats in Scotland.

The Conservative campaign was lack lustre and at times it looked like Cameron was quite keen on collecting his pension. The only thing to fire them up in the end was the ever so slightly racist Jockaphobia message. The irony of claiming that a Government including democratically elected representatives of part of the UK that just voted to stay in the UK would be illegitimate seems to be lost on them. No one said English born voters’ opinions were illegitimate in the referendum, in fact quite the opposite!  As an election tactic, stirring up English nationalism and setting it against not just the SNP but all Scots is the very definition of short termism, and will hasten the inevitable end of political union. I think it’s fair to say that no one expected the Tory majority but then I believe no one ever expected the Spanish Inquisition either.

Amazingly, despite down well in share of vote in England, Ukip was trounced in Scotland. They managed to misjudge the Scottish mood even more spectacularly than Labour. I am, of course, talking about David Coburn’s claim that “If the SNP wins the majority of seats on Thursday, Scotland will be turned into a stripped pine, Scandinavian, peacenik sauna republic.”  What’s not to like?  Weirdly David Coburn’s definition of hell on earth sounds quite similar to my ideal retirement.

SNP influence outside of any deal or enhanced more empowers offer.

As the third largest party the SNP will also have people on every All Party Parliamentary Group and hold multiple influential select committee memberships, in fact they will expect to chief some of them.  To attempt to exclude them would be to attempt to exclude Scotland. Not only would that be against the rules, it would create a constitutional crisis.  The SNP will also be called to speak on every motion – some people won’t like that.  There was recently a debate on the SNP and the SNP were not called to speak, new speaker required.

One Government job, however, may be radically changed from how it was in the past.  The SNP has a majority of members in both Holyrood and Westminster, so how could any other party claim legitimacy for a non SNP Secretary of State for Scotland?  Angus Robertson, for example, using the Scottish Office to bridge the gap between the newly federal Holyrood and Westminster would be an effective use of the Scottish Offices resources. Carmichael seemed to think his job title was Secretary of State Against Scotland. 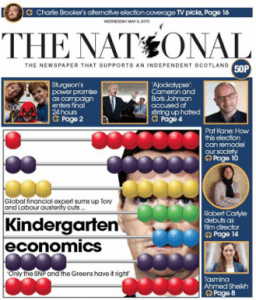 Now we get to my other pet hate – bad economics. And that is the only option we have on offer from Westminster; whereas the SNP want to see an end to austerity the Westminster parties are offering end to end austerity. Steve Keen is the economist who has influenced me most in the last decade and this week he declared that the Tory / Labour / Lib Dem austerity consensus represented a “kindergarten level of economic understanding.”  Austerity is slowing growth and lower public spending levels sufficientl to rapidly cut operational deficits impact disproportionally on the poorest in society, and also on SMEs whose public sector service contracts create much employment.

The 56 SNP MPs may not give a mandate for another referendum but it does constitute a mandate for far more powers for Scotland than are on offer via the Smith Commission.  The Queen’s speech has to include full delivery of the vow / home rule, which includes full fiscal responsibility, so that we can chart a different path towards business and economic growth and a more equally shared national prosperity. Having proven that investing in growth trumps austerity within the UK, we can then begin the journey towards a more federal UK, where each region or nation progresses towards the right level of devolution, fiscal autonomy or independence that is best suited to their needs.